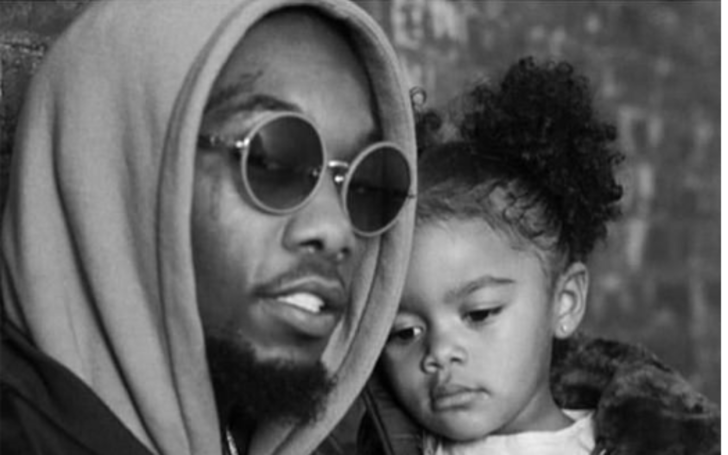 Kalea Marie Cephus is the daughter of singer/rapper, Offset (Kiari Kendrell Cephus) and his ex-partner, Shya L’Amour (Nicole Marie Algarin). Cephus’ father, Offset is a member of the hip hop trio Migos, alongside his cousins Quavo and Takeoff. Marie’s dad is also an investor in the esports organization FaZe Clan.

Marie’s parents, Offset and Lamour’s relationship was full of drama and controversies. They, however, both seem to love their daughter unconditionally.

However, it took a while for Marie’s father to accept and love her. Know why he remained distant from her at the beginning along with all the other facts of Kalea Marie Cephus in the following details.

Kaela Cephus was born on March 23, 2015, in Atlanta Georgia. As mentioned, her father is a rapper known as a member of Hip Hop trio, Migos. He gained recognition following the release of Migos’ 2013 single “Versace”. Migos’ 2017 single “Bad and Boujee” became an Internet phenomenon.

Likewise, Marie’s mother, Shya Lmour is also a rapper from Florida. At the time of Kalea’s birth, Shya was 26.

Offset had to fight for wanting to give Kalea his last name.

The Migos member filed legal docs in his case out of Fulton County, Georgia, requesting that his daughter, Kalea, take his last name.
Marie’s mama, Nicole Marie Algarin, initially named her Kalea Marie Algarin, to which Offset showed objection. He, thus, requested the authorities to change it to Kalea Marie Algarin Cephus.
What’s more, the rapper also asked for joint legal and physical custody of Kalea. Nicole (stage name, Shya L’amour), filed docs last October 2019 asking for more child support from the rapper. Offset claimed he was already paying support and argued both parties should be financially responsible for their daughter.

Offset Had Suspicion If Kalea Marie Was Really His Daughter

In his hit song, “Father of 4,” the Lawrenceville native implied that he missed the first few years of Kalea’s life. This was primarily because he wasn’t sure if he was really her father.

That really upset Shya L’Amour. She said that she had even offered to pay for a DNA test to prove to Offset that she was telling the truth, but he refused. The Florida-born rapper revealed that Offset blocked her number, and changed his own after Shya said she was pregnant.

She then claimed Offset was hiding the fact that he had a whole other girlfriend — who was pregnant with their child — at the time.

Offset eventually agreed to the test and so it seems he is now a very loving father to Kalea.

Through her father, Offset’s previous and current relationship, Kalea has two older half brothers, Jordan and Kody Cephus. She also has a younger sister, Kulture Kiari Cephus born through her father’s relationship with the Grammy-winning singer, Cardi B.

Offset had Jordan with Justin Watson when he was 17. Although Watson kept her life private over the years, she came in 2017 to sue the rapper for child support. She claimed Offset provided sporadic financial assistance and rarely contributed to medical expenses, education needs, and extracurricular activities. Watson tried to get retroactive child support and $15,000 to cover attorney’s fees.

Marie’s father later revealed that he cried when he made his album, The Father Of Four because it took inspiration from his own struggle with fatherhood. Offset once said the journey of becoming a father for the first time was a little tough on him given that he was too young. He added, at the time of Jordan’s birth, he was trying to find himself.

Kalea’s dad went on to have a second child, Kody who he shares with his ex-girlfriend, Oriel Jamie. Cephus and Jamie started dating in 2013 and had Kody on March 3, 2015.

After his relationship ended with Jamie, he started dating Kalea’s mother, Shya, and then Platinum rapper, Cardi B with whom he had his fourth child and B’s first, Kulture Kiari Cephus. With Cardi, he is about to welcome his fifth child.

Kalea Marie’s parents, Offset and Shya L’amour’s relationship was quite a dramatic one. Her mother started dating Georgia-born artists when at 25. L’Amour and Offset began seeing each other back in 2014. Their relationship was short, lasting only for a few months.

The latter claimed Versace rapper was mostly unavailable for Kalea. She even threw some occasional harsh words at Offset mostly via her socials.

As of the present, however, things seem to be friendly between the rapper and her ex-partner. Shya even recorded a video saying Cardi B helped Offset become a better man. In the video, Lamour acknowledged their love for each other and said Marie’s father has stepped up and he has been around as of lately to show her that affection she needed.

Kalea’s Father Has Been To Jail Several Times

Kalea Marie Cephus’ father, Offset has been to court and prison several times. These mostly happened around the time when his career was just kicking off.

In 2013, Marie’s dad went to incarceration in Georgia’s DeKalb County Jail. This was after he violated the probation which he had received due to prior felony convictions for burglary and theft.

In 2015, officials caught him with the possession of an unspecified Schedule II narcotic, marijuana, and a firearm in a school safety zone.

Other offenses that Cephus’ father committed include battery, rioting, driving with a suspended license, and carrying a concealed weapon.

In September 2018, as a father of four, Offset showed major love to his little ones by inking each of their names on his body. Kalea’s name, however, didn’t make the list, claimed at by her mother, Lamour.

The Bad And Boujee rapper took to Instagram to give fans an up-close-and-personal look at the ink, showing Kulture’s name which was along his jawline, his youngest son, Kodi, on the other side of his face, and his eldest son, Jordan, on the top of his shoulder.

Marie, however, didn’t receive the same ink treatment according to the video. Consequently, her mom was not happy about it. She, thus, threw back her reaction through her own Instagram video where she poured out some inaudible words.

Lamour showed some private messages in April 2020 which insinuated Marie’s father, Offset was still craving for her behind Cardi B’s back. Shya leaked the alleged messages saying Offset stopped financial support completely after she refused to have sex with her ex at his request.

Kalea’s mother took to social media to share a screenshot of a text conversation between the pair, which claimed that Offset had begged his baby mother for sex “one last time” while he was still the husband to Cardi B.

Interestingly enough the messages dated back to June 2018. This was a couple of months after the rapper tied the knot with B. What’s more, during this time, Almanazar was pregnant with their baby Kulture.

On her Instagram, Lamour stressed she was actually going to refrain from posting but Offset and his “hoe” — were being too disrespectful even though she was trying to be cordial and empathetic.

Apparently, Offset even lied to Shya about his marriage to the Grammy-winning songstress.