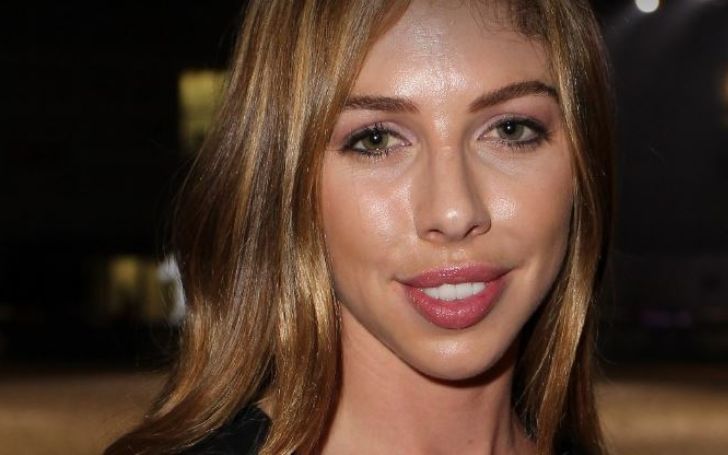 Hannah Selleck is an equestrian and a horse-breeding businesswoman who competes at the Grand Prix level. Selleck is also known as the daughter of Magnum PI actor Tom Selleck and his longtime wife, Jillie Mack.

Hannah’s father, Tom remains a household name and one of Hollywood’s most well-known actors. He, however, isn’t the only one in the family who has made a name for themselves. Tom’s daughter, Hannah Margaret Selleck, who although may not be a showbiz girl, is quite well-known in the equestrian community.

She has been competing on horseback since kid, and over the years has won multiple decorations. Hannah has gradually established herself as a successful showjumper and influential business owner in the equestrian world.

Read all in about the daughter of Tom and his wife, Jillie in the write-up below; her life as a celebrity kid, how she fell in love with horse riding, her amateur phase, her senior year, and others.

Hannah Selleck was born in Dec 1988 in Los Angeles, California. Selleck grew up on her parent’s ranch in the domain of several horses in California.

The now 32 years old Selleck is of dual nationality. Her mother who is British has most of her family living in England; Hannah, therefore, considers it something of a second home. She went to Oaks Christian School (2005 – 2007).

As for the college, Selleck studied at Loyola Marymount University majoring in communications,2007 – 2011. While Hannah prepares for competitions, she is also working toward her MBA at Pepperdine University, aiming to open doors for her career outside the ring.

How Hannah Selleck Got Into Horse Riding?

Hannah developed an interest in horse riding as young as age 4 thanks to her ranch upbringing. Although she had a fascination with other activities like ballet, ice skating, and soccer, horse riding went on to become her genuine passion.

She would go to school and straight to the barn to ride.

Even when she went to college, she decided to stay close so she could stay with the trainer she was with.

In an interview with the Hollywood Reporter in Oct 2015, explaining how she came to love horse riding, Hanna said,

The connection. I loved being around the animals, and as a kid, taking care of different ponies and hanging out at the barn all day. The whole riding culture. You’re spending so much time one on one caring for the horses, so I fell in love with that. As I progressed in the sport, I fell in love with the competition itself.

Selleck and Jillie’s daughter got her start in the show ring at the age of 10. And at 16, she learned to ride at Foxfield Riding School in Westlake Village, California. Ms. Selleck then trained with Mark Bone at Huntover and Karen Healey at the start of her amateur career.

Hannah Father, Tom Selleck Had A Condition Before His Daughter Pursued Horse Riding

While Hannah’s actor father supported her equestrian passion, Tom said he would help support her only if she turns professional.

As per the Blue Bloods actor, his daughter also had to let go of her amateur status, and work for top professionals in the sport in order to learn her craft.

Hannah has been collecting wins and medals since her mid-teens.

During her junior career, she won team silver medals at both the 2005 Prix des States Junior Jumper National Championship in Harrisburg, Pennsylvania, and in the Junior division of the 2006 North American Junior and Young Rider Championships (NAJYRC) in Lexington, Virginia.

Her next major win came in 2007 when she managed to win the United States Equestrian Federation (USEF) Hunt Medal Finals Reserve Champion. That year, she also finished second in the 2007 Pessoa/USEF Medal Finals.

Returning to the 2008 edition of the North American Junior and Young Rider Championships (NAJYRC) in Parker, Colorado, Hannah won individual and team gold medals in the Young Rider division and also earned the style of riding award.

Also in 2008, Selleck’s one other major achievement was winning medals at the Platinum Performance / U.S. Equestrian Federation. Hanna earned her first Grand Prix win in 2010 at the Blenheim Summer Classic in California aboard Tosca van het Lambroeck.

Throughout her college years, the blonde celebrity daughter traveled to see and compete with her horses as much as she could.

During those years, her accomplishments included notching impressive finishes like a second place in the 2011 $80,000 CSI5* Akita Drilling Cup at Spruce Meadows in Calgary, Alberta, with ES Carando Z.

Among her top accolades in international show jumping competitions, one of her biggest achievements came in the summer of 2011. That year, Hannah also earned second place at the Spruce Meadows North American tournament, one of her top finishes to date at the five-star level.

Hannah has also spent a season competing in Europe in 2016. That season, her major victory in the states was winning the CSI2* 1.45m Grand Prix, Miami.

Despite all the aforesaid feats, Hannah apparently is yet to make it to the Olympics.

When she finished college, a thought of doing a career that would support her to ride at a high level as an amateur. she got a job at a public relations firm — as an intern. Hannah worked there for about six months, in Beverly Hills.

While doing so, she remained away from the horses for a while and was only able to ride on the weekends. After that, she realized she had to do the horses, so she quit the PR job.

Selleck then started working for her coach and later became an assistant trainer. She worked for her mentor for a year and for several other top professionals.

Today, the five-foot-eight-inches tall equestrian is based in California and Florida and competes in both the hunter and jumper rings while operating Descanso Farm, her horse breeding business (more down below).

As a senior contestant, Selleck has earned numerous top-10 finishes in international showjumping competitions over the years. During the winter season, Hannah participates in the prestigious Winter Equestrian Festival in Wellington, Florida.

Selleck has been going to Wellington, FL every year since 2013 to train at the highest level and compete at the Winter Equestrian Festival.

Her horses for such competitions are namely Barla, Callway Do Cabo, and H Quito VH Panishoff. Other mentionable incidents of her are top-five finishes in St. Moritz, Switzerland; Belgium; the Netherlands; and the Canadian Pacific Grand Prix at the 2015 Longines Masters of Los Angeles.

Each Of Her 1st Place Wins And Titles

Hannah Selleck Has Her Own Horse Breeding Business

In addition to focusing mainly on her Equestrian career and goals, Hannah also has a breeding program in Hidden Valley, California by the name Descanso Farm. Selleck found it in 2010. Its names come from her family’s Rancho de Descanso, which means “Ranch of Rest.”

There she develops young horses to bring along and sell.

Her young horses for Descano, though, are generally based in New Mexico since the drought in California makes it hard to find grass for them.

It was her actor father who encouraged her to start a breeding business and he was a big supporter of this idea. Hannah started with a couple of top older Grand Prix horses that had brought her along in her career, and when they weren’t able to do their job anymore, she decided to breed them.

By late 2015, Hannah had about seven babies ranging from 4-year-olds to one. Some of them now have become top horses for Hannah herself. I’m not doing it on a huge scale where I have 40 horses; it’s about 12 horses so it’s a boutique operation based in Hidden Valley.

Today, Descanso Farm-bred horses are competing successfully throughout the U.S. and Europe. Over the years, Selleck and Descanso Farm have also transitioned the program’s focus to the development of top-quality sales horses and the advancement of horses’ show careers.

Selleck Also Does Charities And Is An Activist

Hannah is also into Charity through horse riding. She often competes in Charity Pro-Am Styling Competition.

In addition to pursuing equestrian success, Selleck is also passionate about making a difference and serves as an ambassador for Brooke USA. It is also a charity program with a focus on improving the welfare of horses, donkeys, and mules in the developing world.

Hannah Selleck Is Also A Model

Hannah also occasionally involves herself with modeling projects. While working as one Selleck, in Dec 2013, appeared in an advertising campaign for Reviver, ‘the world’s first deodorant for clothes.’

Further, she also has been on the cover of Equestrio. She, however, is not into it full time as she once mentioned all of her time going into the horses.

She initially did modeling to help out some friends, and now seldom does it for my sponsors.

Jillie and Selleck’s daughter, Hannah experienced a minor setback after breaking her leg in a show-jumping competition in early July 2018.

The accident happened when a horse refused to jump and quickly turned, after which Selleck’s foot got stuck in the magnetic stirrup. As a result, Miss Selleck broke both her fibula and tibula when her stirrup didn’t release properly in a fall.

Hannah then had to endure six hours of surgery and then had to go through aggressive physical therapy. The injury sidelined the Californian-born athlete from competition for seven months.

Selleck eventually recovered through both traditional medicine and technology as well as alternative therapies. Hannah was back successfully competing in early 2019.

Does Hannah Selleck Have A Boyfriend?

Nic is also big on philanthropy as he is an ambassador for both the Kids Cancer Foundation and Brooke USA, the world’s biggest equine welfare charity.

Roldan who is also a lover of horses has hosted events such as ‘Horses and Horsepower,’ increasing awareness for the sport he loves and opening the game to a wider audience of players, spectators, and other devotees.

Selleck was last seen attending her boyfriend Roldan playing the Beach Polo World Cup in sunny Miami Beach in May 2022. She was watching her partner from the stands at Collins Park. The 2019 HITS Coachella Desert Circuit winner watched a semi-final match just before Roldan was up next to play and won his semi-final match.

In terms of purse money, so far, Hannah has amassed over $1.5millon. Not to mention, she also benefits quite notably from her breeding business; and mounts have been luxury pats for ages.

What’s more, there are also her sponsorship deals to consider some of which include apparel and equipment brands Butet, Cavalleria Toscana, KASK, Parlanti, and Roeckl.

Having discussed all that, her net worth could be anywhere in the domain of seven-figure though very likely not as much as her actor father who has a net worth of over $45 million.

Top 10 Most Famous Star Kids You Should Know