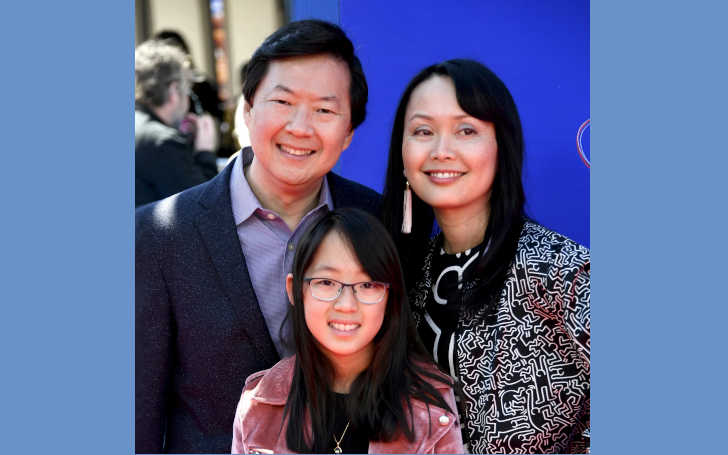 Zooey Jeong is the daughter of the famous The Hangover actor Ken Jeong and his long-time wife, Tran Jeong. In fact, Zooey is one of the couple’s twin daughters. Zooey, who is in her mid-teens has yet to put her step into her career, however, she has already made her way into the glamour world being the daughter of the renowned actor and comedian.

Zooey doesn’t make her media appearances as much which is why people are unaware of many things regarding her. Even though her father shares her photos on social sites sometimes, he hasn’t talked much about her as well.

So, in today’s episode, let’s explore the nitty-gritty of Zooey’s life.

Zooey was born on May 26, 2007, to parents Ken Jeong and Tran Jeong in California, the United States. She has a twin sister, Alexa Jeong. Born in America, Zooey belongs to Asian roots as both her parents are from eastern Asian nations.

Meanwhile, her mother, Tran is of Vietnamese descent, however, details about her maternal grandparents are not well documented as of yet.

Zooey Jeong is 15 years old as of 2022, and she is currently in her sophomore year. As per her father’s interview back in 2015, Zooey was interested in acting and other things. The doting father said Zooey was doing children’s theater and some swimming classes besides her school.

Both Her Parents Are Doctors – Her Father Changed His Career Path

Zooey’s parents Ken and Tran are medical professionals. Her mother is a family physician while her father is an internal medicine physician. Ken received his M.D. in 1995 at the UNC School of Medicine while Tran is a David Geffen School of Medicine graduate.

Both of her parents practiced medicine for a long time before Zooey’s father, Ken changed his career path and started pursuing his dream of becoming an actor. As a matter of fact, Tran had a big role in Ken’s acting career.

She encouraged him to chase his dream leaving his medical career behind when he was in dilemma. Furthermore, Tran motivated him and encouraged him to work even when she was battling breast cancer. Ken accepted the role for The Hangover when his wife’s treatments were going on.

Later on, Ken revealed that he used his role in The Hangover as a therapy where he got to channel all his anger and frustration into the character which ultimately defined his career.

Her parents Tran and Ken Jeong have been together for over two decades and they are married for nearly two decades. The pair who met while they worked at Kaiser Permanente in 2002, hit it off soon and started dating.

After a couple of years of dating, Zooey’s parents got married in an intimate ceremony. Tran and Ken reportedly tied the knot in September 2004.

In 2008, when Zooey and her sister, Alexa were just one year old, their mother, Tran was diagnosed with an aggressive form of breast cancer. The news was devastating for the family as they have infant children who needed their mother by their side almost all the time.

Tran underwent sixteen chemotherapy sessions and a mastectomy followed by radiation. The journey was exhausting for the doctor herself, however, she was always hopeful that she would win the battle. Ken, 53, praised his wife’s spirit in a lengthy blog post on Huffington Post back in 2011. There he wrote,

“She fought back against cancer with everything she had for our girls so that they would grow up knowing a mother’s love, a mother’s instinct, a mother’s touch.”

Moreover, Ken wrote that he was too scared to think about what would happen if he lost his wife and how would he explain it to his daughters. Luckily, Tran won the battle and she officially became cancer-free in 2010, nearly two years after her diagnosis.

Every parent wants their child to follow in their footsteps and achieve even more than they could, however, not all the kids want to do the same stuff as their parents. But, Zooey, here seems to love her mother’s profession. Although it might be a little soon, Zooey has shown her interest in the medical field.

Zooey Jeong Lives in Calabasas with Her Parents

Zooey is 15 years old as of 2022, and it might be a few years before she starts her career. As of now, she enjoys a lavish lifestyle as her parents earn well from their respective careers. Her father worked as a doctor for a long time before switching his career to acting. As of 2022, Ken Jeong has a net worth of $4 million.

On the other hand, her mother, Tran has been working as a family physician for over two decades. She also earns a good sum of money, however, her exact net worth is not known until now.

The happy family of four currently resides in their lavish Calabasas home that Tran and Ken bought for $3.95 million in 2016. The 2006-built Tudor-style house has more than 6,700 square feet of living space and comprises of a private screening room, a modern chef’s kitchen, two offices, and a temperature-controlled wine cellar.