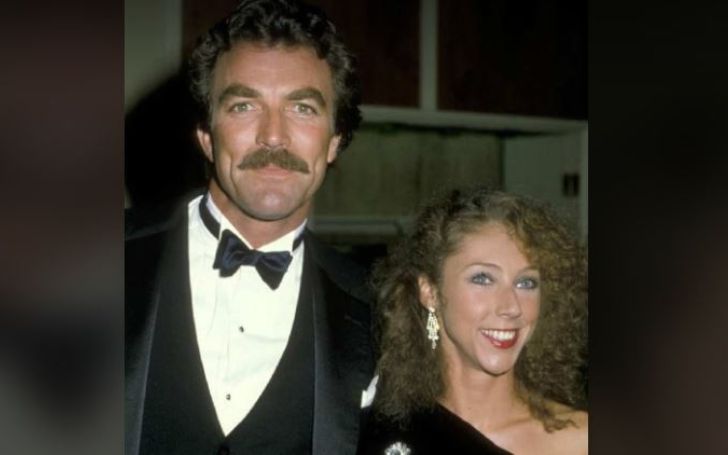 Jillie Mack is an actress who is known for having appearances in series such as Magnum, P.I., Frasier, The Wizard, Tales From The Darkside, Hooperman, Encyclopedia Brown, Fired Up, The Queen’s Nose, and ER.

Hollywood also knows her as the wife of the Magnum, P.I. actor Tom Selleck whom she has been married to since the late ’80s. Selleck has been acting since the 1970s, and throughout the majority of his career, he’s had the lasting support of his wife, Jillie Mack. The Blue Bloods star and his second wife, Mack have become a couple’s goals since getting together.

Like her husband, Jillie also has some credits in well-known series though she didn’t land any regular parts. Get a stretched-out look at Jillie Mack’s life; who was she before meeting Tom, how she met Selleck, their life post the marriage, her dailies, and so on.

Jillie Mack Is British; She Was A Dancer In A Musical Group Cats

While not much about her parents is in the media’s knowledge, it is at the very least certain that the now 64 years old used to be the high-energy dancer who once played Rumpleteazer for the Cats.

What’s also known is she began showcasing her acting talent by initially participating in theatre plays while attending college.

Jillie’s first screen appearance was a cameo on her husband’s series, Magnum PI in 1984. She popped up in the episode, Rembrandt’s Girl as an English girl at a party. She made another appearance the following year in the episode, Professor Jonathan Higgins as Sally Ponting.

Aside from Magnum, P.I., Mack has also appeared in other shows including Tales from the Dark Side, and Adventures of Nicholas at Roaring Camp.

Jillie’s small screen credit also includes the hit series, Frasier. She appeared in an episode titled Police Story as Charlotte. Her last TV credit was in the NBC’s series, ER in the episode, Chaos Theory, 2002. She has also been in a TV movie, Silverfox, 1991.

Mack Almost Had Her Own Show

Mack was also up for a regular role in the series version of the aforesaid film, Silverfox. It was an unsold series pilot about a former secret service agent, turned government spy, who can’t seem to retire.

In the series, The Magnificient Seven actor James Coburn played the lead, while Jillie Mack was set to play one of the female leads alongside him, named Joanie. Unfortunately, the show never got the air date.

Where Did Jillie Mack Meet Her Husband Tom Selleck?

When Mack met her future husband, Tom Selleck in 1983, he was a 38-year-old divorcé filming on location in London for the film, Lassiter.

Selleck had just stopped dating actress Mimi Rogers (former Mrs. Tom Cruise). It had also been a year since his divorce from Jacquelyn Ray, his wife of 10 years. Mack on the other hand was with the musical Cats, playing Rumpleteazer.

Selleck’s coworkers had invited him to watch the musical. After watching the show, he spent night after night in the West End, constantly telling fellow Lassiter star Jane Seymour how great the show was.

Tom, though, had found the then-25-year-old Jillie Joan Mack more interesting. AARP in 2015 reported, that Selleck met Mack backstage, but he couldn’t muster the courage to ask her out.

Instead, it was Jillie who finally asked him, ‘Do you want to meet for a cocktail?’ When Mack first met Tom, somebody had stolen her television three months before so she didn’t know who he was.

The People Magazine says their relationship evolved quickly. They had dinner one night and it went on from there. And when Mack’s contract was up, she headed for the U.S alongside the Friends alum.

Their Wedding; Jillie And Selleck Married Under Different Names

Mack and Selleck married each other in Aug 1987. The couple shocked fans and entertainment reporters alike by tying the knot in secret.

They kept their marriage a secret for almost a whole month you kept it a secret. Selleck’s brother, Bob, later told Tom and Mack had their wedding in Lake Tahoe, at the Dream Maker, an open-all-hours wedding chapel in Incline Village in Nevada.

It was Bob, a real estate executive, who made all the wedding arrangements for them. They married in a Victorian-style chapel taking part in a double-ring, nondenominational, $75 ceremony.

For the ceremony, Jillie picked up the $27 wedding license at the Washoe County Clerk’s Office in Reno on the day of the wedding. Jillie and the Emmy winner exchanged vows at 9:20 night under the aliases “Tom Jenkins” and “Suzie Mark.”

Apparently, their minister didn’t know who they exactly were until minutes before the service. The now 77 years old actor worked frantically to keep the ceremony a secret.

Selleck additionally had only Polaroid snapshots taken of the wedding so photos from negatives couldn’t get into the hands of the press. The guests include Selleck’s parents, Robert and Martha, and his brothers.

A year after their wedding, Mack and Selleck welcomed their first and only child, daughter Hannah Margaret Selleck in Dec 1988.

Jillie is also stepmother to Selleck’s adopted son, Kevin, the biological son of his first wife and model Jacqueline Ray from her previous relationship.

After having their daughter, Jillie and Mack bought a 65-acre ranch in Ventura County, California. Tom once in an interview said he and his wife both thought buying the ranch was the best environment for [Hannah] to grow up.

During the same time, Selleck cut back his working hours and quit Magnum PI to spend more time with his new wife and baby. Mack and her husband have always been good parenting partners for their daughter.

Selleck told the New York Daily News in 1999 when Hannah was a kid they didn’t do anything or make any decisions without consulting each other.

The actor added if one of them made a decision involving Hannah, the other parent completely supported that position, even if they disagreed. Hannah now a full-grown adult is pursuing a career as an equestrian.

Selleck took a big step back from the spotlight and bought the California ranch in 1988 after his wife Mack gave birth to their daughter Hannah.

In an interview the Sacketts actor said,

“I quit Magnum to have a family. It took a long time to get off the train, but I try very hard to have balance, and this ranch has helped me do that.”

“It’s important to nurture your marriage. I think wanting time away from work has been good for that.”

And of course, even now when Selleck is not shooting the CBS’ Blue Bloods in New York City, he’s at home with Jillie on their Ventura, California, ranch.

How Mack And Selleck Managed To Remain Together For So Long?

Selleck claimed his more than three-decade marriage to Jillie Mack has become “more satisfying” with every passing year.

The Mr. Baseball star in Feb 2022 told the US edition of Closer magazine,

“I don’t’ think the infatuation stage of any relationship lasts forever, but it can grow into something. It just grows more satisfying. You become true partners.”

In a previous interview with Entertainment Tonight in October 2015, Tom had said apart from being his wife, Jillie is his “friend.” He described her as a sort of joie de vivre, a woman with an “effervescent quality that just lights up a room.”

Jillie was on the headlines in July 2015 after she and her husband Tom involved themselves in the accusation of stealing truckloads of hydrant water for their California ranch.

It was the Calleguas Municipal Water District in Ventura County that filed the lawsuit against the couple accusing them of dispatching trucks to their avocado farm at least 12 times between 2013 and 2015.

As per the allegations, despite warnings by the Water District in 2015, the duo continued to swipe tank loads from Thousand Oaks to hydrants located in the Selleck Property at Hidden Valley in Westlake Village.

Tom, in response, said he and his wife, Jillie were legally buying the water from a construction company. Later, Los Angeles Times reported the two parties reached a settlement. Tom allegedly paid $21000 to settle the lawsuit against him. The full disclosure of the settlement, however, remained confidential.

How Wealthy Are Tom Selleck And His Wife Jillie Mack? Their Net Worths

While Tom Selleck is clearly a well-off actor with his net worth hovering around $45million, someone who is also rich, a bit surprisingly, is his longtime wife, Jillie Mack. The Devizes-born ex-theater star is said to have a net worth of around $10million.

Worth mentioning here might be the fact that Mack’s husband during his Magnum PI days was reportedly the highest-paid actor in TV with a reported salary of $500,000 per episode. Adjusted for inflation that’s close to $1.2million.

Even in the present, the six-foot-four inches tall husband is busy taking $200,000 per episode for CBS Blue Bloods. Selleck also shares his multimillion-dollar ranch with his wife, Mack.

What Is Jillie Mack Doing These Days?

The up-to-date affairs of Mack is an inside story that is a bit hard to come by. It has been a while since she last sat up for a q and a with the media. On the other hand, Selleck also doesn’t prefer to say much about his life with his wife.

It, though, has been presumed that Jillie now is busy enjoying a ranch life with her semi-retired husband. And the couple has been doing so since the first year of their marriage.