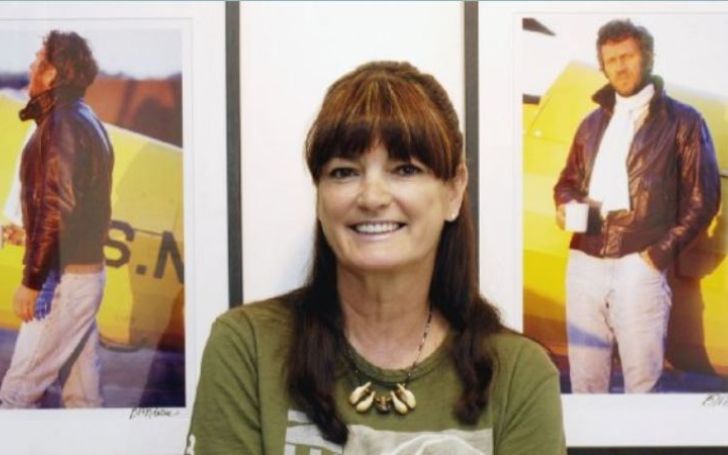 Barbara Minty is a former model, author, and photographer who has graced the front cover of several magazines like Cosmopolitan in her peak days. Likewise, Minty is popular as the third wife of late Hollywood icon Steve McQueen.

Sadly, Minty retired from the entertainment industry following the death of her then-husband Steve. As for now, Barbara is married to her second husband David Burnsvold and is living a happy life in Idaho.

Here, we will talk about Barbara Minty’s life after McQueen’s death. Why did Minty leave the modeling industry? Where is the ex-celebrity spouse now? Find out down below.

How old is Barbara Minty Now? Her College

Barbara Minty was born on 11th June 1953 in Seattle, Washington, the USA under the birth sign Gemini. She turned 69 years old as of June 2022.

Minty holds the American nationality and has Caucasian ethnic descent. She spent most of her childhood in Corvallis, Oregon where she attended Corvallis High School, graduating in 1971.

Minty Went After Her Career Right After High School

Barbara was discovered by modeling agents Eileen Ford and Nina Blanchard when she was 18. Shortly after that, she signed a contract with a modeling agency and began her career in show business.

As we said earlier, Minty was the household name during the 1970s and also did commercials for many brands/companies. She quickly became one of the in-demand models back then and appeared on numerous magazine covers too.

Some of the magazines Barbara posed for are Glamour, Cosmopolitan, Sports Illustrated, and Harper’s Bazaar to name a few. Sadly, the model started taking lesser jobs after meeting her first husband Steve.

How Did Barbara Meet Her Late Husband Steve?

As per sources, Minty grew up watching McQueen’s CBS show Wanted Dead or Alive and was a fan of his man since then. Fast-forwarding to when she became a model, she received a call from Steve’s manager regarding work.

The former model agreed to meet up with the actor and talk to him. As per Steve himself, he had first seen Minty in a Club Med commercial. McQueen was with his second wife Ali MacGraw back then.

After some time, Minty and her then-boyfriend Steve started dating and were in a relationship for two years before their nuptial.

How Long Was Barbara Minty Married to Steve? Their Short-Lived Marriage

After dating for two years, Barbara and her then-spouse Steve tied the knot on 16th January 1980 in the presence of family and friends. At the time of their marriage, Minty was just 27, while her spouse Steve was 50.

Following her marriage, Barbara stopped working completely as they were traveling a lot due to McQueen’s work. And while all was going well, The Great Escape actor was diagnosed with pleural mesothelioma.

And sadly after 10 months of their marriage, Steve passed away due to a heart attack on 7th November 1980. He was just 50 years old at the time of his death.

What Illness Did Barbara Minty’s Husband Steve McQueen Have?

The late action movie icon was suffering from pleural mesothelioma, cancer caused by asbestos exposure. As per reports, there is no known cure for the illness.

Steve first developed a continuing cough in 1978 which made him give up cigarettes and underwent antibiotic treatments though without improvement. After the cough grew more persistent, McQueen underwent a biopsy only to find out he had pleural mesothelioma.

Although Steve tried to keep his condition a secret, the National Enquirer disclosed that he had terminal cancer on 11th March 1980.

Barbara’s First Husband Steve Went To Mexico For Treatment- How Did He Die?

When McQueen’s illness was publicly announced, he traveled to Rosarito Beach to get treatment after doctors from the USA told him that they can’t help him. He went to get help from William Donald Kelly, an American orthodontist who was promoting the Gerson therapy at that time.

For his treatment, he stayed in Mexico for three months. Steve reportedly paid $40,000 per month ($132,000 now) during his stay and returned to the US in early October.

Upon returning back home, Steve’s condition started worsening and huge tumors developed in his abdomen area. After a few days, he flew back to Ciudad Juarez, Chihuahua to have an abdominal tumor on his liver removed.

Despite the warnings from the doctors in the US, McQueen insisted on getting the tumor removed using the name ‘Samuel Sheppard’. Though the surgery went well, 12 hours later Steve suffered a heart attack and died on 7th November 1980 at a Juarez hospital.

The final rituals were done by Leonard DeWitt of the Ventura Missionary Church. Steve was cremated and his ashes were scattered in the Pacific Ocean.

Barbara became a widow at just 27 after McQueen’s death. The couple parted ways for eternity less than a year of their marriage. Moreover, after his final rituals, Barbara bid her farewell to the industry and started focusing on raising Chad and Terry McQueen.

After 27 years of McQueen’s death, Minty published a book entitled Steve McQueen – The Last Mile where she talks about the couple’s relationship.

The book features some unseen pictures of Steve and Barbara from their relationship of three years. It is available on Amazon for $49 per piece.

Similarly, in McQueen’s honor, Minty joined forces with the Asbestos Disease Awareness Organization to raise awareness about asbestos. It is also fighting very hard to ban the import and export of Asbestos in the USA.

Barbara Minty’s Life After Steve’s Death- Who Is Her Second Husband?

Years later, the former model found solace in her second husband David Burnsvold. The couple has been married for quite some time now though they have not revealed any information regarding their marriage or how they met.

As per various online tabloids, Minty is worth around $2 million as of mid-2022. She earns her million-dollar fortune as a photographer and former model.

Minty learned photography to move on from the tragedy. As of 2022, she has held art exhibitions of her work in places like London, Liverpool, Tokyo, San Francisco, Nashville, Boise, Paris, Hamburg, and Phoenix.

Moreover, while she was married to Steve, they lived in a Santa Paula ranch worth $1.95 million. It is the same house where they got married in Jan 1980.

Not to forget, Minty also owns a shopping center in Twin Falls, Idaho which she purchased after selling a piece of land left for her by her late husband Steve McQueen.