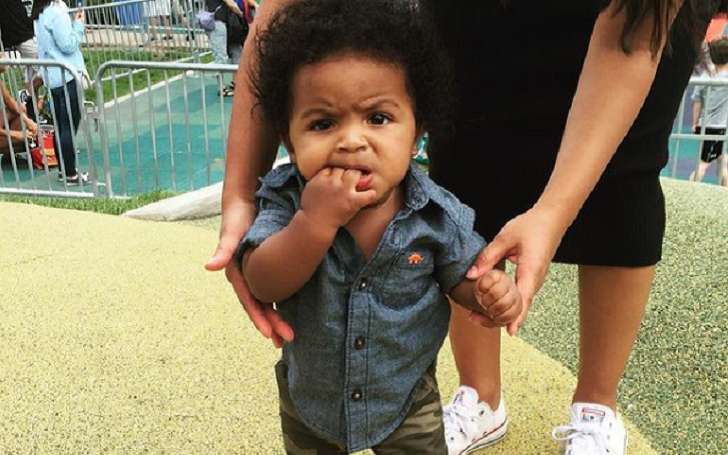 Canyon Grey Felton is a celebrity kid who is better known as the son of R&B singer and rapper Jeremih Felton and businesswoman Rachel Leigh. His parents were in a short-lived relationship back in the early 2010s and broke up even before Rachel gave birth to their baby boy.

The ex-couple had a lengthy custody battle over their son. Let’s find out who got the custody of their son. Besides, let’s also know about Canyon’s life after his parent’s separation.

The star kid was born in early July 2012, in the United States. His age is eight as of 2021. He is an American by nationality. As for his ethnicity, Felton belongs to a mixed ethnical background as his maternal grandfather, Mathew James is an Afro-American while his grandma is a Caucasian.

Besides, Felton currently studies in the 3rd grade.

Canyon has an older step-brother, Mason from his mother’s previous relationship with the tattoo artist and social media star Ryan Henry. They both are super close to each other. Furthermore, their proud mom frequently shares adorable pictures of themselves on social media handles.

Back in May 2020, the ‘Black Ink Crew Chicago’ star shared a photo of her kids with a lengthy message on the occasion of Mother’s Day.

Canyon Grey Felton’s Parents Love Life: Did they ever get Married?

Felton and Leigh never got married. The now-ex-pair began dating back in 2011. Soon after they began their lovey-dovey, the ‘Birthday Sex’ singer impregnated Leigh.

They led a happy relationship for a few months but it couldn’t last long and they separated when Rachel was pregnant with their child. Later on, the baby’s mama opened up that the artist wasn’t too supportive which led them to end their relationship short. She said,

“The guy was not supportive at all. We ended up breaking it off before I even gave birth.”

In the meantime, the businesswoman also claimed her ex-beau Jeremih to be a deadbeat but the claim was later turned out to be a hoax.

On the other hand, Jeremih said there are a lot of people who don’t know that he has a son because his ex-partner didn’t allow him to visit the child,

“A lot of people don’t know I have a 2-year-old son. His mom wasn’t allowing me to see him, and it was messing with me.”

Jeremih and Rachel went through a lengthy custody battle for their son. Back in 204, the artist told in an interview with Billboard that their lengthy fight for custody also impacted his musical career.

Although there is nothing more about how their court fight was actually resolved, it later came to know that Jeremih won the battle.

But, as of now, Canyon appears spending the majority of his time with his mother and step-brother.

Who is His Father Dating Now?

Soon after their breakup, the rapper started appearing together with Karlie Redd on many occasions. Their dating rumors first came out when the rumored couple appeared together in an episode of Love & Hip Hop Atlanta Season 3. But, Jeremih later disclosed that they were just friends,

“I’m just there. I was just helping out. I was helping her out with the record. Karlie Redd, she the homie. I’m glad she and Yung Joc are working things out.”

Furthermore, Jeremih was once speculated to be dating the VH1’s Love & Hip Hop Hollywood star Masika Kalysha. But, neither Masika nor the artist confirmed the rumor.

Born on December 11, 1987, Rachel is a businesswoman and the founder of Pear Nova, the established nail lacquer company. She attended the International Academy of Design & Technology, Chicago, and completed her graduation in 2012.

Besides, talking about her love life, Leigh was in an on-and-off relationship with the tattoo artist Ryan Henry for a long time. But, as of now, the budding entrepreneur is in a loving relationship with her new boyfriend, Troye Antonio.

There is nothing about Canyon’s net worth but there is no doubt that the star kid does have an affluent upbringing. Besides, talking about his mother’s fortune, it is $1 million. Furthermore, his dad’s estimated net worth stands at $2 million. The artist has earned a significant portion of his riches from his prolific music career.