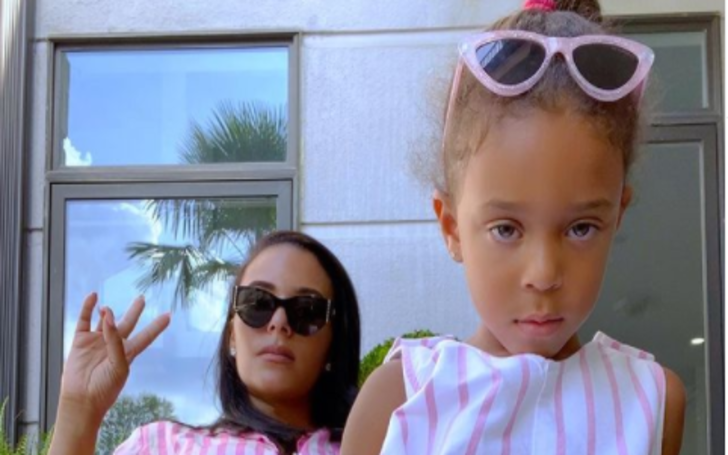 Cadence Gaelle Bridges is the daughter of rapper and actor, Ludacris and his wife, Eudoxie Mbouguiengue. Bridges’ father, Ludacris is known for his role as Tej Parker in the Fast and Furious film series and for his musical hits like Back for the First Time, Word of Mouf, Chicken-n-Beer, and The Red Light District in 2004.

All of them received multi-platinum certification from the Recording Industry Association of America.

Besides being a decorated rapper and an actor, Ludacris is also a dear father to his four children; all girls. While the actor might never tell which one is his favorite, we, still like to go and analyze if that mantle belongs to his third child, Candence.

Know about her relationship with her father, mother, and siblings.

Bridges was born in June 2015 weighing 7 lbs, 4oz. Her parents shared the news of her arrival via Instagram with Eudoxie posting a balloon that had “Baby Girl” written on it, On the other hand, Luda shared his excitement with a throwback photo of his baby’s mother alongside her mom in their homeland of Gabon. Gaelle (meaning, a father’s joy) was Luda’s third child while she was Eudoxie’s first.

From her father’s side, she is of African American descent, and also has more distant English and Native American ancestry. Her father, Ludacris is a distant cousin of late comedian Richard Pryor. Her mother is a model from Gabon. In fact, Cadence’s rapper father holds citizenship in both the United States and Gabon.

Bridges’ grandmother and Ludacris’ mother, Roberta Shields helped launch The Ludacris Foundation. The organization focuses on inspiring the youth through education, memorable experiences, and helping the youth help themselves.

Cadence grandma also created partnerships with industry giants and has led teams of volunteers to deliver more than 150,000 hours of service to more than 10,000 people in need. In addition, she is a former Fortune 100 executive with a background in financial services and strategic planning. Shields holds an MBA from Johns Hopkins University as well as a Bachelor of Arts in Economics from the University of Illinois.

Likewise, her late grandfather and Christopher’s father, Wayne Bridges was a businessman and marketing manager for DTP, Inc., a printing and marketing company.

Cadence’s mom, Eudoxie Bridges is a native of the villages of Gabon, a country in West Central Africa. She currently is an advocate and activist for women who have experienced verbal, mental, and sexual abuse.

Eudoxie through her website, Unspoken Angels, speaks for supporting, educating, inspiring, and empowering young ladies of the United States and West Africa, as it provides safe and comforting environments with positive initiatives for females.

Written in Unspoken Angels is also the story about Ms. Bridges’ humble beginnings. On the website, she has talked about the times of her life where she wouldn’t have enough to eat. She has also discussed her past experiences filled with forms of verbal, mental, and sexual abuse. Luda’s wife has talked about her rough childhood in her book, Unspoken Angel: My Story Through Her Eyes.

She came to America, speaking only three English words.

Thus, with Unspoken Angels, Gaelle’s mom aspires to be able to help such girls deal with the hurt, betrayal, and feelings of inadequacy. Eudoxie also has a degree in medicine.

In May 2018, Gaelle’s activist mother, Eudoxie, through her Ig, talked about her yet another painful experience she endured after suffering a miscarriage.

As she poured her gratitude towards God for allowing her to see another birthday, Eudoxie revealed she faced a major upset in 2018 when she had a miscarriage and needed to have surgery.

While wishing Cadence on her third birthday party, Eudoxie explained how she said the cutest of things a mother could have heard. The activist wrote,

When she witnessed me crying for the first time during my miscarriage, she gave me a hug and said, “it’s going to be ok Maman. Do you want daddy?”

Her younger sister, Chance Oyali Bridges, was born on July 28, 2021. Bridges’ mother named Chance after her late grandmother. In addition to Chance, Cadence has two older half-siblings, Cai Bridges and Karma Bridges each of them from her father’s previous relationships.

In February 2015, the Southern Hospitality singer won primary custody of his 1-year-old daughter, Cai, whom he had with his ex Tamika Fuller. Exactly a year ago, Cadence’s dad had filed for full custody of his daughter. He then claimed he was a fit and capable parent. Unfortunately for the American/Gobonese artist, a judge handed full custody to Tamika citing that it was in the best interest of the child to remain with her mother.

Moreover, the court ordered the father of four girls to pay $7,500 per month in child support and Tamika’s $35,000 legal fees.

Cadence’s eldest half-sister, Karma Bridges, was born in August 2001 from Luda’s relationship with his ex, Christine White. Christine was an Atlanta-based attorney. Karma, the eldest daughter is the primary inspiration for Ludacris’s animated series — Karma’s World. She graduated high school in 2020 and then had announced to attend Spelman College, a private, historically Black women’s liberal art college in Atlanta, Georgia.

The three-time Grammy Award-winning rapper is just as in wonder as any parents would be regarding why kids do things they do. Two of his kids, presumably including Cadence, left Luda struggling to understand why they loved uttering “farts” so often.

In a video posted on TikTok in May 2021, the Illinois-born singer shared his annoyance at trying to get his two youngest daughters to stop saying the word “fart.”

says one of Ludacris’ daughters, who is sitting in the backseat off-camera.

“Yes, but why are ya’ll spelling fart?”

We can see the father responding as his daughters laughed realizing they spelled the word correctly. They, nevertheless, continue to say the word again (and again).

Eventually, Ludacris gets irked and says,

“Why are we spelling fart? Let’s not spell fart anymore — and don’t do it.” Of course, the fart giggles and questions continued. “Alright, that’s enough,” Ludacris said. “No more farts! I don’t even want to hear the word fart.”

One could clearly see the Hollywood star is no far than your average parents who are trying to understand their children’s absurd shenanigans.

This wasn’t the first time Battle Of The Sexes creator had to concede to his daughter’s irrationality. In March 2021, the star uploaded an adorable clip of himself and his two youngest children, Cai and Candence.

In the video, the two little ones, while on a vacation on some beach, could be seen covering their dad in beach sand. Tired Luda looks into the camera and says,

“You know they say sand is a natural exfoliant for the skin.” He jokingly added, “But what do I know? I’m just a dad that’s on spring break with his kids.”

Bridges Parents Got Engaged And Married On The Same Day

Gaelle’s parents, Ludacris and Eudoxie got engaged one day after Christmas 2014. The Illinoisans asked the question to Gabonese model on a plane en route to Costa Rica

Prior to that, they had been dating for nearly five years. It shocked their fans to know that they had already tied the knot. E! reported the proposal and the wedding occurred on the same day.

Eudoxie later spoke with E! and said she and her husband chose a simple and intimate wedding that was perfect for them. She revealed they wanted the day to be about their loving commitment to each other.

The couple initially met on Ludaday. It was a weekend tradition intended to bring families and celebrities together. Interestingly, while Ludacris admitted to cheating on her, Mbouguiengue has been able to give the rapper another chance to amend his mistake.

Luda’s Ex Claimed The Marriage Was A Sham

Chris’ ex, Tamika Fuller, claimed Luda and Eudoxie’s marriage was rather a stunt to show the judge in their custody fight that he had a stable, loving household. Fuller insinuated, he married his new girlfriend so that he could win the custody of Cai. Considering how quickly they jumped from being engaged to — being married.