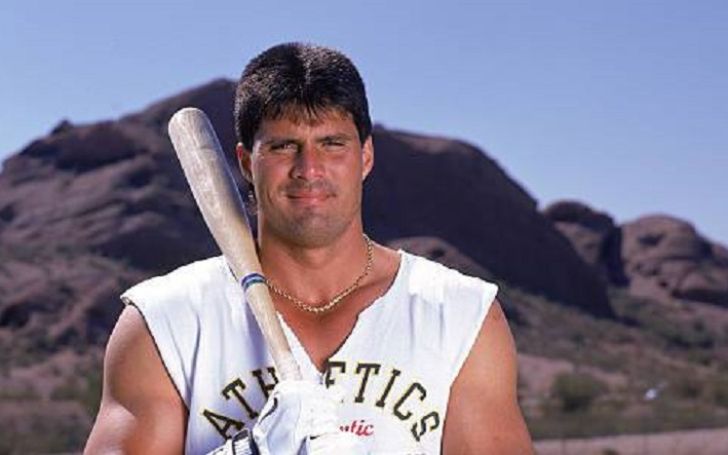 Esther Haddad (aka Esther Haddad Canseco) is an ex-wife of Jose Canseco, a former prominent Major League Baseball outfielder. The couple married in 1988. Meanwhile, Esther’s ex-husband Jose became the American League’s Most Valuable Player the year they tied the knot.

However, their marital relationship didn’t sustain long as it hit the rocks in the early 1990s. Jose was the first to file for divorce. But his wife Esther didn’t know about his plan to split.

So, what exactly was the reason for their divorce? Let’s take a closer look at this, along with many unknown facts about Jose Canseco’s ex-wife!

Haddad was born on December 30, 1966, in the United States of America. She holds an American nationality, and as far as her ethnicity is concerned, Esther is Lebanese from her father’s side and Cuban from her mother’s side.

Her Father was a Coach of Her Ex-Husband Jose Canseco

Esther’s father was one of Jose’s baseball coaches in Junior High School. The old man initially didn’t allow Esther to move on with Jose unless they get married. And the duo eventually tied the knot after they were in a relationship for a few years.

Esther Haddad and Jose Canseco Wed in a Civil Ceremony

The former flames tied the knot on Oct. 25, 1988. Their civil ceremony took place in Coral Gables, a city in Florida. Around two weeks after their ceremony, they repeated their vows at a Roman Catholic ceremony in front of around 350 guests.

The interesting fact is the former outfielder won a $10,000 bet with his teammate Dave Stewart after getting married before their deadline on November 5.

Besides talking about their first meeting, Esther, a 1986 Miss Miami, met her future husband during his rookie year in 1986. He was at the Scandinavian Health Club in Miami when he spotted her for the first time. He asked her out, but she didn’t show interest initially. After some time, they started dating and subsequently got engaged.

Take a look at a rare photo of the couple after they were engaged,

In the next section, we will talk about their divorce.

The couple seemed happy with each other for a couple of years, however, their marriage fell apart after a few years of their nuptials. Their divorce became a legal drama as they filed for divorce in two different states. Jose first filed for divorce in Florida, and a day after his filing, his wife Haddad counter filed in Contra Costa County, in California. Jose said his marriage with Jose was “irrevocably broken.’

In an interview with News & Record, Esther’s attorney Frank Quintero of Miami said that Esther Canseco still loves her husband. The lawyer further revealed that the ex-outfielder didn’t even tell his spouse about his plan to end their two-year marriage. In his words,

“She was not prepared for this. It came out of the blue three or four weeks ago. She asked him to go to a marriage counselor, but he refused. Now she believes there are irreconcilable differences.”

Sources say, even after dueling divorce suits, the exes lived together for some time in their house located in Coral Gables, Florida.

After Esther and Jose filed for divorce, the case became complicated for the ex-couple regarding their property distribution. As per California’s community property law, the belongings the duo owned should be divided equally. But, on the other hand, under Florida’s system, a court can give a party all of the assets or nothing at all.

In 1988, the former duo purchased a $1.55 million home in Coral Gables. They also owned a $1.3 million house in Contra Costa County. Furthermore, Esther said they had a townhouse in San Ramon.

Besides, Haddad claimed on her legal papers that the duo owned some luxury cars, including Porsche 928, a Porsche 930, a Ferrari Testarossa and, a Toyota Four Runner.

A year after their separation, Jose rammed his red 1985 Porsche into his ex-wife Esther’s BMW, which was worth $78,000 at the time. As a result, the former baseball outfielder was fined $10,000 in damage for aggravated battery.

He was liable to spend 15-year jail time, but luckily, the court only booked and released him on a $5,000 cash bond.

What is Esther Haddad up to these days?

Esther Haddad Canseco has kept her life out of the media after her divorce from Jose. She is not active on any official social media platforms. So, we are unable to find anything about how her life is going at present.