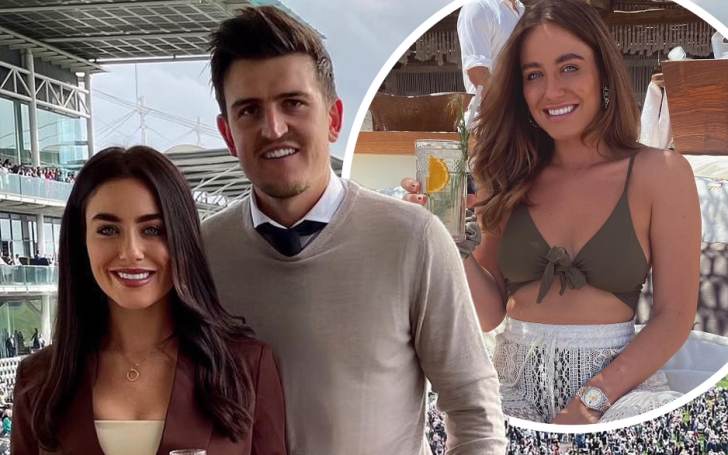 Fern Hawkins is a physiotherapist best known for being the wife of an English professional footballer for Premier League club Manchester United and the England national team Harry Maguire (aka Jacob Harry Maguire). Her husband Harry received worldwide attention after he was chosen for England’s squads for the 2018 FIFA World Cup.

Talking about their personal life, Fern and her husband Harry is now a married couple as they shared their vows in June 2022. Long before their marriage, the couple was living in a live-in relationship and they became the parents of two beautiful baby girls. Well, if that’s the case, how long have they been together? What about their children?

Today, in this article, we are going to talk about everything about the FIFA World Cup Player’s wife, Fern Hawkins including her wedding with the Manchester player, age, social media, children, net worth, and many more. Here we go.

The FIFA World Cup player Harry Maguire’s wife, Fern was born to her parents on July 23, 1994, in Sheffield, England. As of 2022, she is 28 years of age. Though not much detail regarding her childhood is known to the media, it can be said that Hawkins had a decent childhood in her hometown with her family.

As for education, she has a Bachelor’s degree in science and physiotherapy. Hawkins received her degree with First Class Honours in 2017.

Besides, she belongs to the Caucasian ethnicity and holds British nationality.

What Does Fern Hawkins Do For A Living?

Besides, she is also a lifestyle photo blogger and a fashion blogger due to which she gained popularity as a model of Chic. But, at present, she seems to be inactive in the media. So, we don’t have sufficient information regarding her income sources. But we can assume that she may be practicing on a degree she received and giving continuity to her passion as a photo and fashion blogger.

The physiotherapist tied the knot with Manchester player Harry Maguire on the 25th of June 2022. The now-married duo walked down the aisle at the extravagant marriage ceremony at Chateau de Varennes in the south of France, one of the top 10 venues in the world.

About 30 guests including the Three Lions player Jordan Pickford and his wife Meghan Davison attended their wedding. As per reports, all guests were flown by private jet from England to France. Following the wedding, her spouse Harry posted a photo from the wedding and captioned it,

Prior to marrying in a grand ceremony, the couple had exchanged the vows in a low-key ceremony at Crewe Registry Office in Chesire just for the London marriage certificate.

How Long Have Harry And Fern Been Together?

Coming up to 2022, the Soccer player, Harry, and the physiotherapist, Fern has been together for almost 11 years. The now-married duo first came across each other in 2011 in Sheffield at the time when Harry was a player for Sheffield United.

Since then, they were dating and on February 17, 2018, the couple shared a ring in Paris. After the engagement, Fern shared her joy on her Instagram (which is no more available), and wrote,

“On Saturday night, Harry made me the happiest girl in the world & asked me to marry him in the most perfect way.”

And finally, after 4 years, the engaged couple married in their dream city, France. Then, the newly wedded duo flew to Italy for their honeymoon.

Fern And Harry’s Clicked Photo In 2018 FIFA World Cup Turned Into Meme: What Was Their Reaction

In 2018, a Manchester United Player was playing in a World Cup, his now-wife Fern was watching the game in the stadium. At the end of a penalty shoot-out victory for England over Colombia, Harry went on to the conversation with his now-wife. And that moment was clicked and their image went viral and later used as a meme.

Their casual conversation turning into memes didn’t impress the couple. Regarding this, Fern’s then-fiancee reacted and told,

“It became a big meme. I’m not even sure what we talked about. My girlfriend, now my wife, didn’t love the picture – or the angle of it. But we weren’t used to it, Fern and I. We kept our lives private; we weren’t used to being in the papers. It was strange for us. There was good banter between the players and the fans, though – even the media.”

Fern’s Husband Got A Bomb Threat In 2022

In case, if you don’t know, Fern and her now-husband were in a live-in relationship for many years. While they were just engaged, Fern’s now-husband received a bomb threat. During such a critical time, Maguire was worried for his now-wife more than anything. He said,

“People ask if it affects me. My mentality is that it doesn’t affect me too much but when it comes to bomb threats, it is more about family. My fiancee Fern.

From this statement, it is clear that even before their marriage, Fern and her better half were families to each other. And no surprise that Hawkins stood strong by his side in such a critical time for which people praised her for her support to her then-fiancee Harry.

Fern and her husband have two daughters together named Lillie Saint Maguire and Piper Rose Maguire. She became a mother for the first time in April 2019 after giving birth to her first-born child Lillie.

After Lillie’s birth, her father shared the news of her arrival on April 3, 2019, on his Instagram with a caption,

Further, Fern and her spouse again became parents in May 2020 with the birth of their second daughter Piper. This time too, the baby girl’s father shared his joy on his Insta on May 9. He wrote, ” Welcome to this crazy world baby girl 🌈🌟 Piper Rose Maguire 💖🌹”

Now, in 2022, a newlywed Hawkins has an abundance of moments to enjoy family life, at one side, she just became a wife and on another, she is the mother of two beautiful and adorable girls of age 3 and 2.

On the other side, her famous husband Harry Maguire is on Instagram under the username @harrymaguire93 in which he sometimes shares his personal life moments with his wife Fern.

As per several sources, the well-known celebrity partner has a fortune of $6 million. Her major source of income is probably her profession as a physiotherapist and photo blogger. On the other hand, her spouse Harry Maguire has an estimated net worth of $20 million.