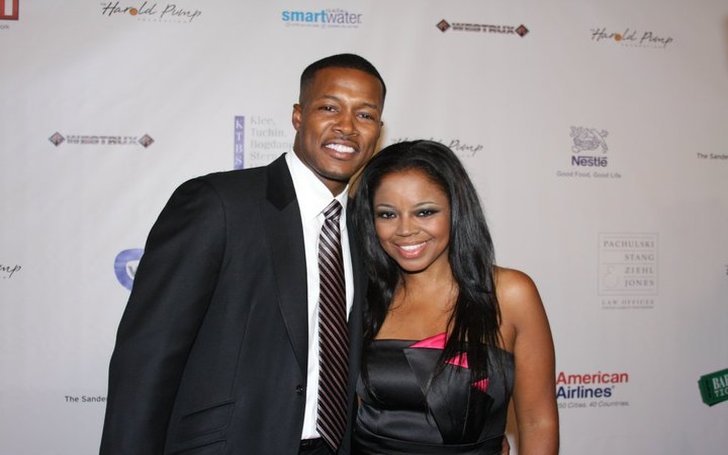 Flex Alexander or Flex (originally, Mark Alexander Knox) is an actor, comedian, and dancer. He is best known as Flex Washington on One on One. Knox is a two-times winner of BET Comedy Awards and four times winner of NAACP Image Awards. What’s more, he is also the creator of a graphic novel, The Joshua Run.

Flex is also famous for appearing on his own reality show, Flex, and Shanice (2014-2016), with his wife, Shanice. Alexander and his wife have gone through a lot from going broke and facing numerous career roadblocks.

The 51-year-old actor/comedian who is a member of the Phi Beta Sigma fraternity fought back hard to rescue his family from the financial ruins. Know all his struggles and how he overcame them in the content below. Also know about his early, career, personal and much more.

Alexander was born in Harlem, New York on born April 15, 1970. He is the son of Alethia Knox and Robert Whitehead. His mother worked 3-4 jobs to make sure he and his siblings had what they needed. While it is unclear how many of Knox’s children are there, Flex at least has one older brother and one younger sister.

Knox’s father, Robert Whitehead was a bass guitarist who passed away in 1989. Flex and Whitehead met each other only three times.

His brother Dwayne got himself mixed up with bad apples, turning to the streets and illegal substances. Dwayne would later lose his life from AIDS.

Mark also would leave the house at 15 and become a street hustler, sleeping on subways and doing almost anything to make a living.

In 1988, things changed when his friend lost his life in a confrontation with a rival drug dealer.

Flex found himself in a similar situation. But he survived when the dealer who had put his gun to Flex’s head jammed. Knox promptly left the street life after that.

How Dancing Changed His Name

Mark attended High School of Art and Design in Manhattan, majoring in Architecture.

When he was a teen, he began dancing in New York night clubs earning the nickname “Flex” due to his acrobatic dance skills.

Later, DJ Spinderella discovered him. He then began touring with rap trio Salt-n-Pepa’s and remained with the dance troupe for three years.

In 1989, Alexander made his stand-up comedy debut. He eventually shifted to acting making his film debut in the 1992 film Juice. He was also a regular cast member of the sketch comedy show, Uptown Comedy Club, from 1992-1994.

Flex’s first television role was on the brief 1993 ABC sitcom Where I Live, starring Doug E. Doug. Despite receiving critical acclaim, the studio canceled it within a year.

The New Yorker comedian then guest-starred on episodes of Sister, Sister, and The Cosby Mysteries before moving to Los Angeles in 1995 to concentrate on acting. In 1996, the NAACP winner landed a starring role on another sitcom Homeboys in Outer Space, though, this, too lasted for a brief amount of time.

Additionally, he had roles in several films including the 1998 direct-to-video release Backroom Bodega Boyz and She’s All That (1999).

Other Shows And Films

From 2000 to 2001, Shanice’s husband appeared as Maya Wilkes’ husband Darnell during the first season of the UPN sitcom Girlfriends. He left Girlfriends to star as single father Mark “Flex” Washington on the UPN sitcom One on One. He, himself created and produced the series. For his role on One On One, Alexander received a nomination for three NAACP Image Awards and two BET Comedy Awards.

In 2004, the father of two portrayed Michael Jackson in the VH1 television biopic Man In The Mirror: The Michael Jackson Story. This garnered him another NAACP Image Award nomination.

Alexander returned to One on One for two more seasons. During the last season, however, the show wrote out his character and reduced him to a recurring role for the show’s reboot.

Following the end of One On One, Alexander went on to have roles in the 2006 film Snakes on a Plane, opposite Samuel L. Jackson, and the 2007 horror film The Hills Have Eyes 2.

He also starred in Clement Virgo’s Poor Boy’s Game, with Danny Glover. and in a 2007 episode of CSI: Miami.

As of the recent time, the six-foot-three-tall actor and his wife, Shanice, had their own reality show Flex & Shanice which aired on channel, OWN.

These days he’s also been DJ’ing on Zoom.

Flex Alexander Wife Says His Faith In God Attracted Her

They used to live in the same San Fernando Valley apartment complex. The Grammy nominee singer told HuffPost they ran into each other in an elevator.

In several interviews, the songstress has said that Flex’s love for God was the first thing that made her love him. The pair initially started out as friends. They had their first date at Mel’s Diner in Studio City, California.

Shanice is famous for her coloratura soprano voice and her ability to sing in the whistle register.

Why Did Flex & Shanice Marry Fast?

Mark and Shanice only dated for about three months prior to their wedding.

So he came up with the name “ghetto engagement” to describe those who were taking too long to tie the knot. Once they left church, they hopped into the car after which Flex looked at Shanice and asked her to marry him then and there to which she agreed.

They Lost Their House; Worst Moment Of Their Marriage

During an interview with Page Six, the One on One star recalled the hard time he and his family lost their LA home in 2010.

The actor said it was a real estate crash. He and his wife had bought a lot of property so the hard times came along and he continued to try to hold onto that property and pull from savings.

At the time, Alexander thought real estate was a great way to attain wealth and it was something he wanted to pass down to his family and kids. So he tried to hold on.

The crash hit the family big time and he and his wife went on to have financial struggles. The couple aired their difficulties on their OWN reality show “Flex & Shanice.” Shanice and Flex even pawned their wedding rings, though which they rescued back later.

Alexander, however, says he doesn’t regret going public with their story of bankruptcy. He explained he never had regrets. Alexander declared he is from the projects in the South Bronx and that type of stuff hardly fazes him.

The family survived and these days their careers are back on track with both of them enjoying their millionaire life.

Flex Alexander Burrowed $350 To Celebrate His Anniversary With Shanice

It was during one of their tough times when Flex had to seek help from his friend to take his wife out on an anniversary date.

In May 2020, while talking with one of his pals, Chris on Instagram live, the Bronx native said it was their anniversary and he couldn’t do anything for Shanice.

Flex added it was Chris who gave him $350 so that he and Shanice could enjoy their day. The actor went all sobby and expressed his gratitude for his friends on camera.

So Are They Still Together; What Flex And His Wife Doing Now?

Fans and the Alexander couple got their happy ending when the latter triumphed over their hardship during their show. The couple is all now enjoying their stable life and focusing on each of their ventures whilst still being married to each other.

In April 2020, while talking with Fox 5, Alexander revealed he was working with some guys out of DC on a streaming platform business that the actor named CEEK. Shanice’s spouse described the service focuses on goggles and virtual reality. His company CEEK from Miami, Florida focuses on connecting music artists and digital content creators directly to their fans.

On the other hand, Flex’s wife of 20 years said she was also working on her own line of lipstick, Smell by Shanice. She mentioned the product comes vegan and is non-toxic.

The couple said they came with their ideas during pandemic 2020.