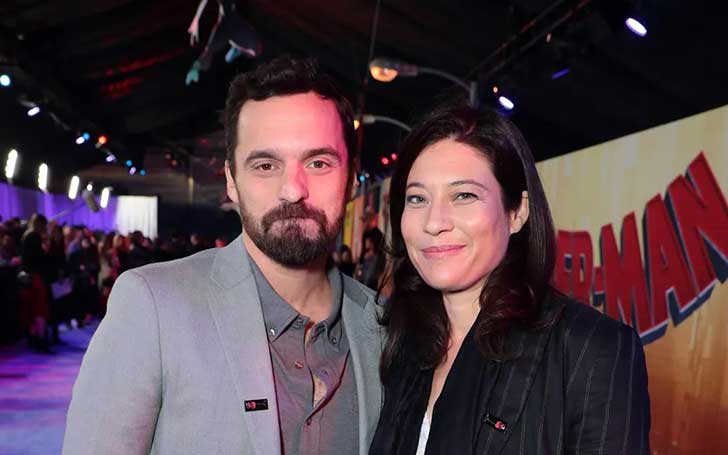 Erin Payne is the wife of American actor, writer, and comedian Jake Johnson. Besides, Erin in herself is a professional painter. In fact, Erin is the winner of the New American Paintings Reader’s Choice Prize  2012. Erin and her now-husband Jake have been together for more than one and a half decades, however, their romance is not well mentioned in the media.

The pair’s relationship was strengthened after the arrival of their two daughters. However, the New Girls actor, Jake is always secretive about his relationship with his wife, Erin. He rarely talks about his marriage and even so, he reveals pretty little about it.

So, in today’s episode, we’ve come up with a detailed article about Jake Johnson’s wife Erin Payne. Read the article through to know about her.

Erin Payne’s Birthday-How Old Is She?

Contrary to many celebrity spouses, Erin Payne prefers living a low-key life. In addition, her husband Jake Johnson also helps his wife to achieve it. Due to this fact, many details regarding Erin’s early life that also includes her birthday and parents are unavailable.

Meanwhile, some online sources have mentioned Erin Payne was born on September 8, 1971. The sites have also reported her birthplace to be San Diego, California, however, these facts are yet to be verified. Interestingly, Erin’s better half, Johnson hasn’t ever wished her birthday publicly. Considering the fact true, Erin Payne’s age is 50 in 2021.

Erin Payne is a graduate of Claremont Graduate University located in Claremont, California. She completed her Masters of Fine Arts (MFA) degree from the university in 2011. Before that, she attended Bachelor of Fine Arts (BFA) at the School of the Arts Institute of Chicago in 2002. There she learned painting and drawing.

A Glance at Her Professional Painting Career

She was interested in arts from her early days. Later, she also went on to pursue arts in academics and earned a Bachelor followed by a Master’s degree in arts. She started her professional career as an artist soon after she graduated from the School of the Arts Institute of Chicago in 2002.

According to her LinkedIn, she started her journey in June 2002 in Los Angeles. As of 2021, she has given nearly two decades of her life in the arts. Back in 2012, Erin won the New American Paintings Reader’s Choice Prize. The winner was selected after the voting by its blog readers.

After she received the award, her art got picked for the NEXT ART CHICAGO fair in April 2012. Once, Erin talked about her passion for art in a conversation where she said,

“I had pursued a lot of different interests including art in undergrad. It was during the time after school that I realized art was the only thing that I was willing to sacrifice comfort and money for. It also allowed me to pursue all of my interests within it. I was hooked.”

Erin further talked about her inspiration saying: “I’m inspired by hard work and dedication to one’s dreams, as well as the humility to grow and evolve. My husband embodies all of these qualities.”

What Is Erin Payne Net Worth?

Erin hasn’t been so vocal about her career and income as she is with her personal life. So, at present, it’s a little difficult to estimate her earnings and her net worth. On the other hand, her husband Jake Johnson is a very famous Hollywood actor who has worked on several successful projects.

As of 2021, Jake Johnson’s net worth is estimated to be around $8 million.

Well, the first and the foremost is their initial meeting. Erin and Jake first met back in the mid-2000s. Some close sources have revealed the pair have been together since 2005. Meanwhile, some online sources have reported they have been married since 2006, however, the truth seems to be a little different.

We’ve found out that Erin Payne and Jake Johnson got married on July 16th, 2011. According to their marriage details published on theamm.org, their secret California wedding was officiated by Jake’s brother, Dan Johnson-Weinberger.

The New Girl alum Jake never spills beans when it comes to his relationship with his wife Erin. As a matter of fact, he didn’t even reveal how long they have been together in his interview with Glamour magazine back in  2013. When the interviewer asked him “You and your wife, Erin…how long have you been married?” he only said “A while.” And when the interviewer followed up asking “How long is a while?” Jake said, “My business is personal.”

Johnson, however, did give a sweet answer when he was asked what’s more important, “right timing or right girl?” Answering this, he said,

During the same interview, Jake went on to reveal his wife, Erin doesn’t drink alcohol. He revealed the fact while responding to the question if a girl not drinking hampers her relationship.

He said, “I don’t think a girl’s desire to drink or not has any effect on guys.”

They Are Parents to Two Daughters

Erin Payne and her husband Jake are proud parents of twin daughters. Their daughters are aged seven as of 2021. However, Neither Payne nor her actor hubby has revealed their daughters’ names or birthday.

Being an actor, he might not get much time to spend with his girls, however, he had more than enough time during the coronavirus pandemic in early 2020. Jake said, during the break, he found himself “cooking meals.” Talking to Kelly Clarkson, Jake said, “cooking meals for kids is such a thankless gift.”

He further added that when he presents them the food, they act like they’re the judges on a cooking show. Jake went on saying, “They’ll say, ‘I like the texture, but I don’t like the cheese on the quesadilla,’ and I’ll be like, ‘Thank you, judge. How about you?'”

Like we mentioned earlier, Payne has been mum about her relationships before she met her life partner, Jake. But, her spouse once gushed about his past affair during an interview with Marie Claire in 2012. Back then, he said he had been together with Erin for around seven years and was happily married.

However, he also said Erin was not the first person he fell in love with. Johnson said he dated a girlfriend for around four years during his early 20s. He said he dated the girl from 20 to 24 and they also lived together in Queens. The Illinois native said he had thought he would get married to the girl, but they ultimately split. Jake noted their breakup was fast and weird.