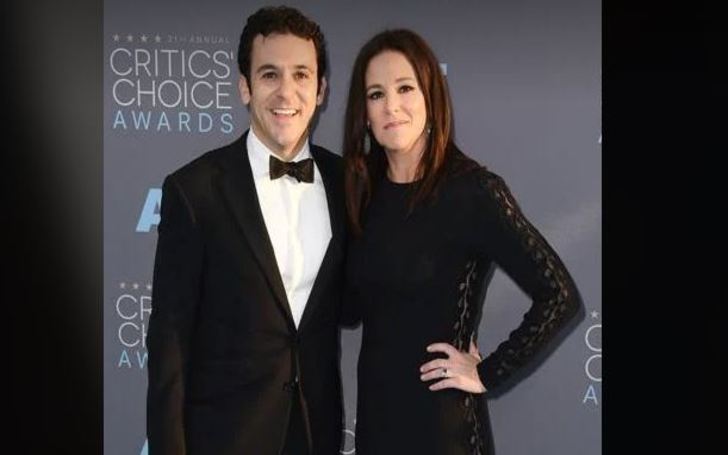 Jennifer Lynn Stone is the wife of Fred Savage, the actor who played Kevin Arnold in the ABC series, The Wonder Years. Lynn and Savage have been together for more than two decades with three children in between.

Professionally, Jennifer Stone is very much in a different career to her husband who along with his equally famous brother during the 80s and 90s, was a notable face in the television thanks to high-rated shows. Fred, his brother, and even their sister, Kala Savage, all were the quintessential characters on their respective shows.

One could say Fred and Ben have grown up in the public eye. What’s also intriguing in Fred’s story though is his love life. Know to the fullest about his significant other, Jennifer Stone, where and how the couple came to be, how they kept it strong for all these years, and much more.

Who Is Jennifer Lynn Stone?

Stone was born in 1973. The now 44-year-old hails from Chicago and grew up in Glencoe.

When she was in her 20s, Lynn used to be a commercial real estate agent.

As for the present, however, it is unclear if she’s still in the profession. What makes the matter more puzzling is that the mother of Fred’s children isn’t that in the known even on social networking sites like Facebook, Twitter, or Instagram.

Also in the middle of nowhere are the details relating to her parents, her lineage, and basically her life prior to meeting her actor partner.

Jennifer Lynn Stone Grew Up With Her Husband

Jennifer and her husband were childhood friends. They got to know one another while growing up in Chicago.

The future couple allegedly spent their childhood together in the suburbs of Chicago.

The pair, however, would lose their connection in 1988 when Fred then 11, and his family relocated to Los Angeles. The eldest child of the Savage had just landed the role of a lifetime on the small screen as Kevin Arnold in The Wonder Years.

The former real estate agent and the ex-child star, though, would reconnect eleven years later.

After the end of The Wonders Years, Savage started to get less busy on the small screen, and he was working in other facets of the business. Once he entered his 20s, he met his old friend at his 22nd birthday party and she was none other than Jennifer Lynn Stone.

They then started off a relationship and got married.

While talking with People, Savage said,

“We started talking and smooching, and we’ve been together ever since.”

When they met for the second time, Savage was still in some television projects, while Jennifer was working as a commercial real estate agent.

They Got Engaged In Italy

Fred proposed to Jennifer in September 2003. He asked her to marry him during a trip to Italy with a five-carat cushion-cut sapphire surrounded by diamonds. The ring was from the designer Neil Lane in Los Angeles. Stone’s then-boyfriend, Savage engraved the ring with “I must have done something good.”

Apparently, it is a line from The Sound of Music, Stone’s favorite movie.

Jennifer and her husband had a Jewish wedding. She married her fiance, Fred Savage on August 7, 2007. The couple exchanged vows at L.A.’s L’Orangerie restaurant.

The nuptials had a tent with topiaries and orchid-bedecked lanterns. L’Orangerie restaurant in L.A served as the venue.

The groom wore a black tux while Stone wore a white Monique Lhuillier dress, complete with borrowed Neil Lane jewels. She had an Edwardian-style necklace and a diamond-and-platinum bracelet.

They had rather unique wedding vows. The Princess Bride star promised to always bring up a glass of water to Stone before they would go to bed, and the bride promised to never let her dress – herself.

Lynn’s husband, Fred Savage as mentioned rose to prominence through his role of Kevin Arnold in the series, The Wonder Years. He is also the recipient of People’s Choice and Young Artist Awards nominations.

His other popular roles include the Grandson in The Princess Bride and the voice behind the titular Nickelodean protagonist, Oswald.

After The Wonder Years ended its run in 1993, Stone’s husband, Savage continued to work in television and movies. He had appearances in films like Austin Powers in Goldmember, The Rules of Attraction, and Welcome to Mooseport.

He, in addition, produced and directed Phil of the Future on the Disney Channel and directed episodes of the sitcom Kitchen Confidential and Nickelodeon’s Drake & Josh.

The Jewish star also starred on the ABC sitcom Crumbs.

She Is The Mother Of Three

Together, Stone and Savage are parents to three children. They had their first child, a son, Oliver Phil Savage on August 5, 2006, and their daughter, Lily Aerin Savage on May 3, 2008.

When it came to her third pregnancy, Stone and her partner, however, kept it a secret and only announced the news after the arrival of her third child. This time it was a boy who Jennifer and her actor husband named Auggie Savage. He was born on November 26, 2012.

Despite the couple spending most of their adult life in L.A., they once said they wanted to raise their children to have the spirit of Chicago in them.

In an interview with the Chicago-Sun Times, Fred said,

“While we’ve lived in L.A. for a long time, it’s very important to us to instill in our children a sense of that Chicago spirit — and we keep it alive in our house all the time.”

The question presumably arises in light of the fact that  Fred hasn’t shared any imaging of him by the side of his longtime partner Lynn.

Accordingly, there are suppositions though with no credence insinuating that the parents of three might have already separated. However, Fred last mentioned his wife, Stone on his Instagram in April 2020 posting a rather funny picture alongside an equally hilarious caption.

In any case, the childhood friends turned husband and wife are likely very much together and could be certainly so for years to come.

What Does Deanna Burditt Do For a Living? Her Life Before & After Rick Harrison