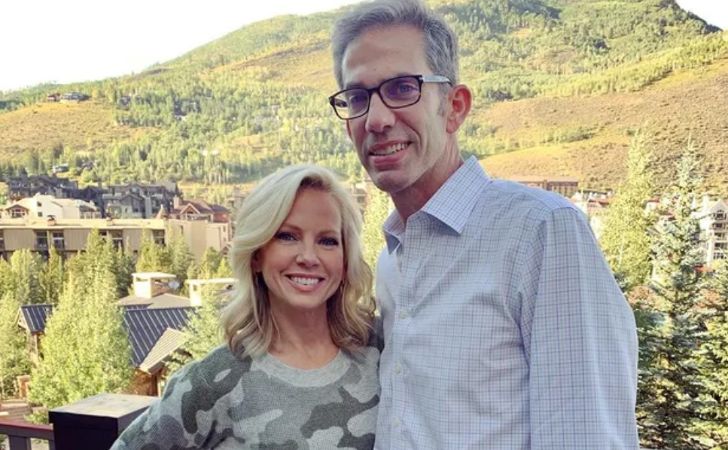 Having been married for around three decades, Sheldon has gained immense fame as Shannon Bream’s husband. But despite his popularity, a major part of his life has been kept away from the media’s reach. Further, following his recovery from a life-threatening illness, Sheldon has attracted more & more attention from the public.

Well, in this article, we are going to explore Sheldon Bream’s family background, occupation, married life, & much more.

Shannon’s husband Sheldon Bream was born on October 30, 1970, in Pennsylvania, the United States. In October of 2022, he will turn 52 years of age.

Well, on the occasion of his 51st birthday, his wife shared a beautiful photo on her Instagram and wrote a beautiful message expressing her love. In the caption, she wrote,

Happiest birthday to my love and BFF. You are a steady rock, man of principle and loyal friend to all. You’re also a heck of a lot of fun. I could spend every minute of every day with you and still wish for more! 😍🎂,”

His Parents Are No More

Talking about her parents, Sheldon was born the youngest child among six children of his parents. But unfortunately, neither his father nor his mother Jouetta Bream is anymore in this world.

Following his mother’s death, Shannon expressed her grief on her Instagram. In the caption, she wrote,

My beloved mother-in-law has gone on to heaven. Jouetta Bream was a devoted wife and mother, a hard worker, funny, giving, accepting and gave the best hugs. She was deeply faithful and ready to be with Jesus. We will celebrate her with laughter and tears this weekend and look forward to reuniting one day.

Needless to say, Sheldon shared a great relationship with not only his father but also his mother.

A handsome hunk, Sheldon Bream has a good academic background. He is a graduate of Liberty University and has a Bachelor’s Degree in Sports Management & Business.

Just for a fact, his older brother Sid is also a graduate of Liberty University. Well, the University has reported that over 30 members of Bream family have been a part of it.

One of Sheldon Bream Five Siblings Is Very Popular

As we said earlier, Bream has five siblings. While not much is known about the rest of his siblings, one of his brothers Sid Bream is a widely popular baseball player.

As per the reports, he even played Major League Baseball (MLB) for over a decade before taking his retirement. He reportedly began his career in 1983, playing for the Los Angeles Dodgers of the MLB. After quitting the team in 1985, he joined Pittsburgh Pirates where he was until 1990.

Shannon Bream’s Husband Sheldon Bream Is A Businessman: He Aspired To Become Baseballer

As we said, Sheldon leads a successful career as a businessman at present. He started his career professionally working as a director of Bureau Relations at the Washington Speakers Bureau. He worked with the company from January 2005 until March 2018.

Since 2018, he is into entrepreneurship and has started a company named Bream Speaker Management LLC based in Arlington, Virginia in April 2018. The company aims to provide speakers to event planners.

While he is a well-established businessperson at present, things were not the same earlier. He instead aspired to become a professional baseball player. However, he did not achieve the desired success in the game.

Sheldon Bream Is Married To His Wife Shannon Bream For Years

Well, Sheldon leads a beautiful marital relationship with his wife Shannon. The couple married on December 30th, 1995, in a beautiful wedding ceremony. As of 2022, the husband and wife are together for almost three decades and they are still going pretty strong.

Back in 2020, the duo celebrated their 25th anniversary and Shannon even shared a photo from their wedding day on Insta to revive the moment. In the caption to the photo, she came with incredible lines, she wrote.

25 years ago tonight! I knew I was crazy about this guy, but I couldn’t know what an incredible husband he would actually be.

Despite the fact that they are together for so long, there has been no news of conflicts or extramarital affairs from both sides. They have immense love for each other which is very much visible.

There has been a lot of curiosity about Sheldon and Shannon’s meeting. Well, the couple met for the first time back in their college days at Liberty University, Virginia, at a stadium during a Homecoming game.

At the time the two were already dating different people. But as fate had it, they broke up with their respective partners and began dating each other soon after the college ended. They went on their first date on occasion of the valentines day back in February 1993.

In 2021, the lovebirds also celebrated their 28 anniversary when they revisited the same stadium they came across for the first time. They also shared a photo from the day on Instagram.

He Does Not Have Any Children

This may sound unusual but Sheldon does not have any children despite being married for decades. Moreover, the couple has also not talked about not having any kids so far. Nevertheless, they seem pretty content and happy with their life.

The Bream couple are rather parents to a couple of dogs. Previously they had a dog named Miss Mocha after which they adopted Jasper. In 2022, they also have another dog who they have named Biscuit Bream.

Well, this is interesting; Shannon is not just an American journalist and lawyer working for Fox News Channel. She has rather been the title winner of Miss Virginia 1990. At the time, she was just 20 years of age.

Soon after winning the crown, she again competed in Miss America 1991. But unfortunately, she came in 10th place, and the title was won by Marjorie Vincent.

Bream went through a rough phase when he was diagnosed with a brain tumor when he was in his early 20s. It was back when he was in college and was a college athlete. Shannon revealed the news back in January 2020 during Fox Nation’s Ride to Work. She said,

It was a complete shocker. He was a college athlete, very healthy and strong and he’d had an ear problem – like a ringing in his ear – for a long time.

“They treated him for everything, ear infections, all kinds of stuff, and they said ‘Well, we need to rule one thing out. It’s a longshot.’ But the test came back and they said ‘You’ve got a brain tumor. It’s about the size of a golf ball and it’s got to come out.”

As per the sources, at the time of his diagnosis, Sheldon was 24 and was already engaged to Shannon to get married. Moreover, around the same time, he also lost his father.

Well, Sheldon had to undergo 9 hours long surgery for the removal of rumor. But unfortunately, the procedure led to his facial paralysis. But just around a month before their scheduled marriage, Sheldon moved the corner of his mouth, which as per doctors was the first sign of his recovery.

The incident happened at the Pizza Hut where they were for a lunch buffet. Talking about the incident, Shannon said that she jumped with joy, and people around them thought they were crazy.

A month before we’re supposed to get married and I thought I saw the corner of his mouth move. People think we’re nuts and we do not care at all. From there, he slowly began to recover. And it still took a while. But thank God he’s good. No more return of that.

Well, as of now, Sheldon has recovered completely & is living a beautiful life.

What Is Sheldon Bream Net Worth?

He is well established professionally as he leads a successful business. While he has not revealed the exact sum of his wealth, there are estimates that he has a net worth of $500k as of 2022.

On the other hand, his wife Shannon has a net worth of around $10 million as of 2022, as per Celebrity Net Worth. She reportedly earns an annual salary of $3 million.