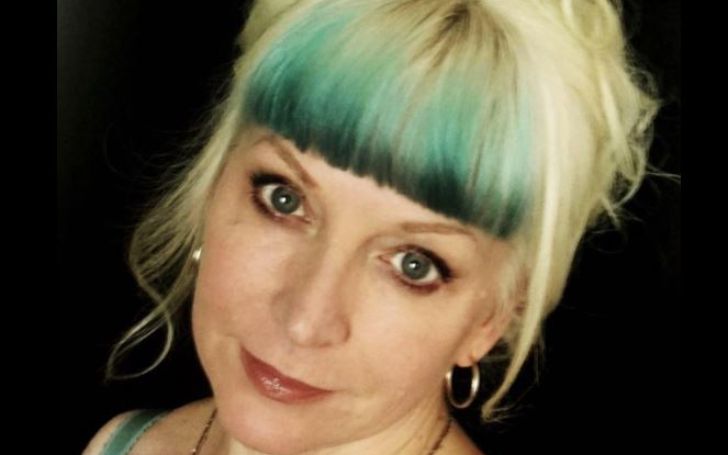 Know in excess about Winslow in the article below; her life before meeting Lana Wachowski, her life as an alternative sex worker, and more.

Karin Winslow’s real name is Karin Ingrid Winslow was born on December 15, 1967, in Connecticut. In 1996, Karin told sexuality.org that her German mother was a “Nazi love child, a product of World War II.”

Her mother died when she was a young girl. The 54 years old grew up in the communities of San Francisco and New York. Winslow was also a runaway kid. She had also become a teenage punk rocker and later moved to Los Angeles around 1997.

How Karin Winslow Stepped Into The World Of Sex That Involved Dominance, Submission, and Control?

In an interview, Karin said it took her until her early twenties to understand that sadomasochism was an integral part of who she was and define herself as part of the leather community.

In addition to running the Dungeon, where Winslow established a wide following among Hollywood’s power elite, she also used to give advanced piercing classes to aspiring dominants, or masters.

For this Winslow had founded a website, Pro-domination.com, that allocated a portion of subscriber dues to a legal defense fund that benefited professional dominants who ran afoul of law enforcement.

Winslow was among the ones who would take complete charge of her clients’ minds and bodies, using ropes, whips, chains, knives, and needles. The Mirror states Strix was at one point making £156 per hour “whipping and beating her clients”.

In 2000, Lana’s wife both starred in and directed Trans Sex Slave, a video “with four transsexual beauties,” and her video Fetish FAQ 1 received a nomination for an adult Oscar in the Best Bondage category.

She even received a nomination for an AVN Award (the adult Oscars) in the Best Bondage category for her work in Fetish FAQ 1. Winslow’s first public appearance on screen, however, was her role in Demon Familiars.

The project is a short thriller movie that features a lot of homosexuality themes. Winslow also used to teach, act, and direct. She made educational videos and taught classes in subjects ranging from “piercing and sterile technique” to “the fundamentals of flogging.” Winslow retired from the alternative sex community in 2002.

Karin And Lana Wachowski Relationship; How Did They Meet?

Karin’s place regularly played out power dynamics between two different types of people: eager submissives, or slaves, and the dominatrixes who, for an hour or for a night. After that, they began developing feelings for each other.

Larry also sent Winslow elaborate bouquets of flowers and bought her books, clothes, and shoes. Sometimes after their first meeting, Lana and Karin flew to Australia, in first class, to be on location for the two Matrix sequels, for weeks at a time.

They also attended the 2003 Cannes film festival as a couple. For the general public, however, Larry and Ilsa first appeared at the L.A. premiere of Matrix Reloaded in 2003.

Karin Winslow Was Married To Another Transgender Man

Prior to Lana, Karin was the wife of Buck Angel or Jake Miller from 1998 to 2001. Jake was a woman before changing gender.

He was additionally Karin’s partner in running the Dungeon. Jake had undergone a sex-change operation in 1995, three years before he married Karin.

Buck had turned to surgeons to have her breasts removed and had her chest expanded, via testosterone injections, to the size of a muscular man’s. Angel, from below the waist, however, remained female.

Karin and Buck Angel used to live together in a compact house in the then-gritty L.A. neighborhood of Los Feliz. They started to experience rifts in their relationship following the increasing relationship between Winslow and Lana.

Jake ended his courtship with Winslow in the early 2000s and the former dungeon worker subsequently left the home they shared on Kenmore Avenue. In the divorce settlement, Winslow reportedly got the PlayStation and silverware, while Buck received the gas grille, a Cape Cod etching, and “all remaining kitchen supplies.”

Later, Winslow’s ex-husband Miller, told the London Sunday Mail and the New York Post that Wachowski had stolen his wife away. He added Wachowski was a cross-dresser and that he’d seen him and Winslow in action together.

Lana too was formerly married to Thea Bloom. He had married Bloom in 1993. Bloom and Lana had been together since college. The former filed for divorce in 2002 after knowing about Winslow and Lana.

The settlement was at about $30,000-a-month. After ending both of their former marriage, Lana and Winslow left Los Angeles and the duo moved into a $2.7 million home in San Francisco, on a steep hill in the Castro, with sweeping views of San Francisco Bay.

They also shared a mansion in Venice, yards from the home the Matrix director had with Thea. After marrying Wachowski, Winslow had become a board member of the Chicago House and Social Service Agency.

Lana and Lilly have a combined net worth of $225 million. They earned the majority of their wealth through The Matrix film and video games.