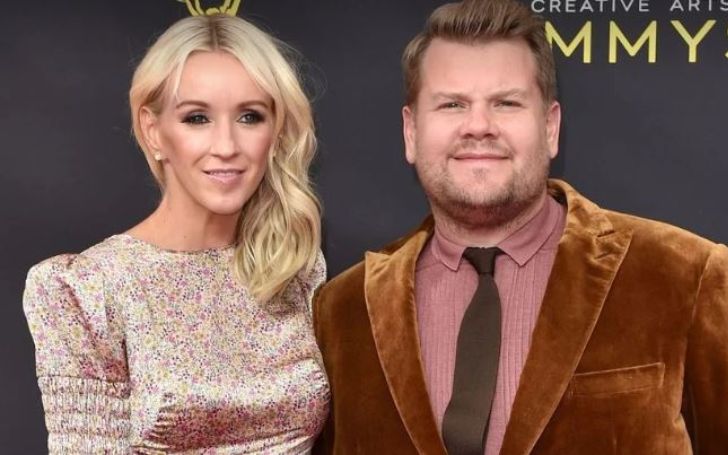 Julia Carey is a former television producer who started her career as an actress, featuring in TV shows like Wings, A Bunch of Fives, and Enemy at the Door. She is better recognized as the longtime partner of James Corden, an English comic actor, writer, and television personality. Her husband is best known as the host of The Late Late Show with James Corden, a late-night talk show that has been on CBS since 2015.

Corden’s wife, Carey is also known for The Fashion Fund (2014), and Extra with Billy Bush (1994). Julia, the mother of three with Corden also worked for Save the Children in London, which is how she met her now-husband at an event hosted by the charity in 2009.

Further, Carey has worked in television both behind the camera and on-screen. While her’s husband, James is a familiar face in the show biz, not much is known about her. So get to know who Julia Carey exactly is, her story prior to being the wife of Corden, her nationality, and more.

The now 43 or something-year-old, Julia Carey was born in 1979/1980. Something that is still a mystery is the origin story of Mrs. Corden; where she was born or who her parents are.

As such the Gavin and Stacey actor is still to share even the tiniest bit of his wife’s personal details. Carey nonetheless is presumed to be of British origin though her actual nationality is something purely out of suppositions. And in distinction to unpopular opinions, she isn’t related to the Mask actor Jim Carrey.

Aforesaid, Julia and Corden first met back in 2009 at a charity function. Carey who is just as tall as her husband at about five-foot-eight-inches was then working for Save The Children.

It was Corden’s friend and the Preacher actor,  Dominic Cooper, who had invited James to a charity event and a subsequent night out. Cooper and Corden then were also flatmates.

Once after reaching the event, Dominic introduced James to Julia. Corden then wasted no time telling his future wife how he felt.

“I said, ‘Hi, Jules. You might be the most beautiful woman in the world,’”

the London-born presenter remembered. To that, Julia replied,

‘Well, thank you very much. That sounds like something you say a lot.’

‘I’ve never said it before in my life.’

An hour and a half later, James and Julia were off in a corner “jokingly” planning the rest of their lives together. They especially found each other interesting over their love of quiet, uneventful nights.

As per James, the night he and Julia met, they talked about how they were both bored of going out all the time and that they were going out too much. Recalling the time with US magazine in Sep 2021, Corden said,

“The night we met, we talked about how we were both bored of going out all the time.”

They were also finding it boring how too much they were drinking and having too good of a time. Corden said they bonded by staying in instead of going out.

“Jules and I never went on dates,”

the One Man, Two Guvnors actor said. Corden and Carey sometime afterward in the midst of their first conversation, as a joke, went on to plan the rest of their lives together.

At the end of the night, they had a little sort of “smooch in the back of a cab.” After that, Corden asked Carey what she was doing on Saturday night. At the same time, he suggested that they stay in and do nothing all the week.

They eventually started dating shortly after that first meeting. The Tony Award winner asked Carey to marry him On Christmas day in December 2010 while enjoying a romantic holiday in the Maldives. Two years later they tied the knot in Sep 2012.

Also on the guests’ list were singer Natalie Imbruglia and comedians Jimmy Carr, David Walliams, and Michael McIntyre. Julia and James had apparently planned to marry a little earlier but couldn’t do so because of the former’s pregnancy with their first child Max.

At the time of their marriage, the couple’s son, Max was 18-month-old. They had welcomed their first child, Max in March of 2011.

Additionally, Carey and her host husband, Corden are also parents to two girls, Carey and Charlotte. They welcomed Carey in October 2014, and their second daughter, Charlotte, in December 2017.

For the time being, the family of five lives in Los Angeles, where James continues to host The Late, Late Show.

The blonde wife of Corden previously worked as an actress before she built a career working behind the scenes in the entertainment industry, reports The Sun.

She reportedly has made background appearances in some major shows, including Entertainment Tonight, Extra with Billy Bush, and Amazon’s The Fashion Fund.

Julia also appeared in the ’90s sitcom Wings, and others like A Bunch of Fives, and Enemy at the Door. But some sources suggest she has never been on the show, Wings.

Carey, in any case, never got associated with any movie projects. In the meantime, and as mentioned, she was also involved with the non-profit organization Save the Children.

What Does Carey Do Now?

Evidently, Julia is fairly private about her life; she doesn’t have a public Instagram or that much of a presence on any other social media. Corden’s partner is clearly a low-key person and seemingly also doesn’t bother to sit on for q and a’s or some one-on-one chats.  It resultantly is quite unclear what Carey does these days.

Julia Carey Helped Her Husband With His Weight Issue

“I’m doing a bit of exercise,”

Corden admitted this in a March interview with Oprah for WW while crediting his wife, Julia Carey. She helped him make exercise a regular part of his routine, despite Corden admitting to “hating” it in the past.

Also, apparently, Julia in Feb 2018 urged her husband James Corden to get a vasectomy.

How Rich Is Julia Carey’s Spouse, James Corden; What Is His Net Worth?

Julia’s husband, James Corden is comfortably rich. In fact, he is one of the richest show hosts not only in the UK but the stateside as well. And in the last 6 years or so, he has had lucrative salary boosts from the A list studios.

Corden’s salary up until the year 2020 was reportedly in the range of $4 million -$5 million a year. Speaking of which, in 2019, the CBS channel boss announced the then 40-year-old presenter reaching a new £5million-a-year agreement. Likewise, in Jan 2021, he had an offer of double the amount of his then existing £7 million salary.

This was allegedly a bid to stop him from quitting the US. His current contract runs until 2023 and that means more millions are coming into his pockets.

Corden has a lower salary of $9 million for hosting The Late Late Show with James Corden, compared to the other late-night hosts. He though has one of the highest overall fortunes with his net worth allegedly sitting ahead of $70 million.