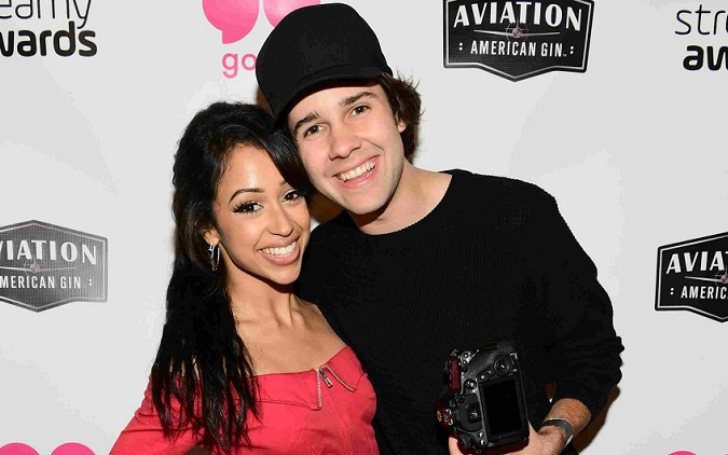 Liza Koshy is truly a multifaceted lady who has built a successful path on several major platforms from acting to comedy to Youtube. She is not just an American actress but a TV host and a YouTuber with millions of followers.

But besides her professional accomplishments, Liza also attracted huge media attention after her highly publicized relationship with her ex-boyfriend David Dobrik. But who is Liza Koshy’s boyfriend at present?

To know more about her love life, keep reading.

Koshy is not reportedly dating anyone as of 2022. As per the sources, the social media star has not moved on since her break up with her YouTuber boyfriend, David.

The Instagrammer has completely kept her romance out of the mainstream for some time now. Koshy is possibly focused on her career rather than anything.

That said, back in 2020, there were rumors that Liza was in a relationship with Broadway star Anthony Ramos. However, it turned out that they were just together for a music video for the A Star Is Born actor’s song named “Relationship.”

Also, it was later revealed that Anthony was rather in a long-term relationship with Jasmine Cephas Jones and are reportedly engaged since December 2018.

Koshy is famous for her relationship with Slovak YouTuber David Dobrik. Even though the couple has parted ways for a long now, their fans are still curious to know everything that went between them. So, let’s talk about their relationship in detail.

One of the beloved social media couples Liza and David started dating back in November 2015. Koshy celebrated their one-year anniversary by posting a beautiful photo with her then-boyfriend Dobrik on 29th November 2016.

Liza wrote in her lengthy caption, “now imagine how happy i am after dating him for 365 days.”

They were truly happy with each other and it’s sad to know they are no longer together.

How Did Liza Koshy Meet Her Ex-Boyfriend David Dobrik

As per sources, the two first met at a party in Hollywood back in 2015. Lisa shared her first photo with David on 28th July 2015 from the VidCon event organized at the Anaheim Convention Center.

They remained friends for a few months before their friendship turned into a romance. The two gradually started featuring in each other’s YouTube videos.

The former flames later shared a number of photos on their respected social media accounts, flaunting their love quite openly to the public. Nonetheless, it didn’t last long & they separated after two years.

Liza and David Announced Their Breakup In a Tearful YouTube Video

While Liza and David looked like they were meant for each other, they couldn’t remain together as a couple for more than two years. Balancing their professional and love life simultaneously might have created some anomaly in their relationship. The two announced their break-up in a tearful now-deleted YouTube video titled we broke up on 4th June 2018.

In the video, they said,

We felt like we were living separate lives but neither of us was coming to terms with it. So I decided we should break up. We didn’t want to tell anybody because we were just so angry at the fact we distanced in the first place. We did nothing to each other to cause a break up. We have a lot of growth and development and learning and loving to do.

In the video, the social media stars made it clear that they had separated six months prior, however, were waiting for the right time to share the news with their fans.

Why did The Couple Take Six-Month To Announce Their Break-up?

Liza talked about her breakup with David during her appearance on The Late Show with Stephen Colbert. There the actress responded to the curiosity about why they took six long months to announce the break-up. She said that both of them wanted to heal themselves before they go public. She added,

We wanted to give ourselves some time to come to an understanding and be able to be best friends and be in each other’s lives still without being in a romantic relationship and still be able to create online.

She went on to say,

For those six months, we took that time for ourselves to grow. And to create, still, together and show the world that you can be friends, that you can still be in love.

After the video went viral which has amassed over 65 million views, Liza revealed she’d never post such clips again on YouTube. She maintained that we should be open to the community as social media icons but also keep some truths untold.

Upon split from her boyfriend David, Lisa took a short hiatus from her career.

David Dobrik Seems to Have Moved on-Who is His Girlfriend?

As of 2020, Dobrik is rumored to be dating Natalie Noel. However, the rumored couple is yet to confirm their relationship.

While Dobrik has been linked to his high school friend Natalie for a long time, the Slovak YouTuber shocked his fans with a marriage. David married his friend, Jason Nash‘s mother Lorraine Nash, 76. He also shared the video showing his wedding to Nash on his YouTube channel. Have a look.

Initially, it appeared to be a prank that Dobrik played on his friend. However, later it came out that they were married legally after the YouTuber filed for divorce a month later.

In conclusion, we can say that Dobrik married his friend’s mother as a prank while David also took a marriage certificate side by side.