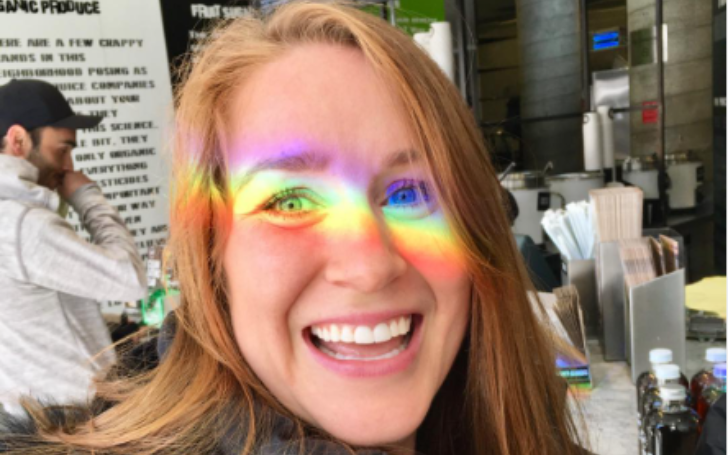 Paige Howard is an American actress best known for her roles in Cheesecake Casserole, The Astronauts, and more. She is also recognized as the younger sister of actress Bryce Dallas as well as the daughter of actor/director Ron Howard. Not only that but, her paternal grandparents were also well-known actors.

Besides, Paige is in marital bliss with her husband, actor-plus-singer Tim Abou-Nasr. So, let’s know when and where their wedding was held. Prior to their wedding, did you know their first meet was a kind of what often happens only in movies?

In addition to Paige’s professional and personal life, here in this article, also explore every interesting and unknown fact about her. Let’s get started!

How old is Paige Howard? Details On Her Childhood & Date of Birth

Paige Howard is 37 years old as of 2022. She was born on February 5, 1985, in Los Angeles, CA to Ron Howard (father) and Cheryl Alley (mother). Furthermore, Paige has a twin sister named Jocelyn Howard. She also grew up with her elder sister Bryce Dallas and a younger brother Reed Cross Howard.

For her ethnicity, Paige belongs to the mixed ethnical background and holds American citizenship. Besides, the star kid went to enroll at New York University’s Tisch School of the Arts.

Talking about how was Paige’s early life, we could find out that the star kid spent most of her childhood in East Outside of New York City. Her father once said the director never liked the media exposure when it comes to his kids,

“We even moved our kids out of Los Angeles and raised them East outside of New York City, because we just didn’t want them exposed to it.”

Paige Is From A Family With Roots In The Show Busines

As said earlier, Paige comes from a family of actors. Well, from her paternal side, both Rance Howard (her grandfather) and Jean Speegle Howard (her grandmother) were actors. Some of the TV shows Paige’s granddad has appeared in include Luke, Chinatown, Cool Hand, and others. Likewise, her grandmother starred in TV films like Cocoon, Gung Ho, Frontier Woman, and many more.

Unfortunately, none of her paternal grandparents are in this world. The actor Rance Howard died on 25th November 2017, in Los Angeles, CA, and his wife Jean Speegle Howard passed away on Sept 2, 2000, of heart and respiratory illness.

On the other hand, her maternal grandparents were Vivian Schmid and Charles Alley.

What is her Height?

The 37-year-old actress is believed to be 5 feet 10 inches tall.

What Is The Meaning Behind Her Name?

Paige Howard’s first name is of Latin origin which means a young helper. As for her middle name ‘Carlyle,’ her dad Ron took it in honor of her birthplace Carlyle Hotel in New York City.

Surprisingly, it didn’t only apply to the twin sisters, but, also to Ron’s other two kids. The eldest one Bryce Dallas Howard’s middle name ‘Dallas’ was inspired by the place Dallas city of Texas. Furthermore, his youngest child Reed’s middle name comes from one of the famous streets in London.

In 2008, Paige Howard made her first stage performance at the Vineyard Theatre in New York City. She played the title character in J. M. Barrie’s play Mary Rose, directed by Tina Landau. After that, the actress guest-starred in an American supernatural drama TV series Medium.

The following year, Paige appeared in an American teen drama television series 90210. She then made her feature film debut in an American comedy-drama film Adventureland.

In 2011, the actress went on to appear in a couple of TV projects like StalkTALK and Virgin Alexander. And her other acting credits include Cheesecake Casserole, The Employer, Arrested Development, Happy!, The Smiler, and many more.

Besides, Paige Howard once also made a joint appearance with all of her family members in one of the episodes of the TV series Arrested Development‘s 5th season.

How Did Paige Howard Begin Dating Her Now Husband? Their Frist Meeting and Dating

Paige and her boyfriend-turned-husband Tim Abou-Nasr came across for the first time, in 2017. It was Tim who walked into Paige’s apartment. They haven’t revealed whether they were old friends or not. But, we could find out that their first date was on November 28, 2017.

Well, it was her then-beau Tim who revealed their first date through an Instagram post on November 28, 2019, on the occasion of their Anniversary. He wrote,

When Did Paige Howard Marry? Know About Her Wedding/Husband

Paige and her husband Tim Abou-Nasr, after dating each other for quite some time, eventually ended up marrying each other. Their wedding ceremony was held on May 1, 2022, in Central Park, New York.

For their big day, Howard and her spouse Tim also hired Tim Yun and his team as their wedding photographer, a beautician Katey Denno & Lemondnyc (wedding makeup and hair team).

Furthermore, they designed their wedding dress at Hera Couture. Paige gave them a special thanks through her Instagram post. She wrote,

“HUGE thank you to all our loved ones and everyone who brought their magic touch to the occasion.”

Howard’s father Ron officiated their wedding and her sister Bryce was Bridesmaid at the event. Similarly, Paige’s dad said it was an unparalleled highlight to officiate his daughter’s wedding.

Two years before their wedding, Tim also disclosed they were engaged. He wrote on his Instagram with the caption,

Missing my gorgeous fiancée on this #womancrushwednesday – but so glad she’s having such a beautiful time in France!

Lately, the two are also quite updated on their social media handles. Talking of which, Tim posted a bundle of images of the duo and wrote the caption, “So grateful, so relieved, so in love. It was worth the wait!.”

Her estimated net worth is $1 million in 2022. She has mostly made her fortune from her roles in both movies and TV shows. At present, the actress is living quite a healthy and wealthy life with her husband Tim.