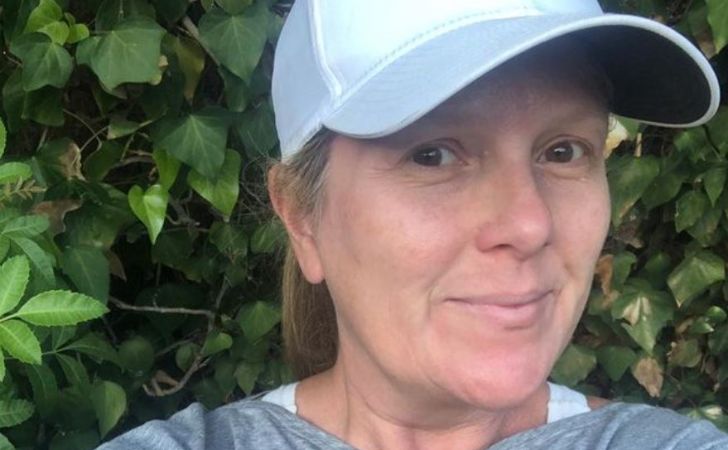 Melanie Truhett is a successful American producer and manager known for her works in Mystery Men (1999), Drew Carey’s Improv-A-Ganza, and many others. She is also famous as the wife of the stand-up comedian, & actor Brian Posehn.

49 years old Melanie is together with her husband for around two decades and they share a great relationship. The couple also has a son from their marriage. Well, in this article, we will discuss everything from Melanie’s career, family details, her earnings.

Melanie is an American producer and manager. She was born on Mar 31, 1972, in Los Angeles. She is the daughter of father Carlton Truhett and mother Arvilla G Truhett.

She shares a great relationship with her mother and they often spend time together. Truhett also has a sister named Cheryl Lynn Allen.

Talking about her education, she did her schooling at Reedley High in 1990, Later, she attended California State University, Fresno, finishing her graduation in 1996.

Her Father Died Of Lung Cancer

As of 2021, Melanie Truhett is married to comedian and Brian Posehn for over 16 years. They tied the knot on September 4, 2004, in a hotel in Santa Monica. Only a few of their close friends and family members attended their wedding ceremony.

Despite years of togetherness, they share the same love they had when they met. In fact, the comedian never misses wishing his wife on their marriage anniversary. He is rather very open about his love for Melanie. In his anniversary day post in 2020, Posehn wrote that his wife is the best thing that ever happened to him. He wrote,

Sixteen years ago today, my best friend and I held an event on the patio of a hotel in Santa Monica where we told a bunch of our favorite people we would be together forever. So far, so great! Happy Anniversary, @melanietruhett! You’re the best thing to ever happen to this 3xl dork. Here’s a pic from when we could go places and celebrate things.

Similarly, back in 2017, he wished Melanie on the anniversary posting a photo from their wedding day. Check this out.

13 years ago today my family and a bunch of my favorite people came to Santa Monica to witness me marrying the smartest, sweetest, most beautiful woman I had ever met. She still is. I am so lucky and happy. Happy Anniversary, baby!

Hope the love they have for each other remains intact forever.

The beautiful couple met for the first time back at the end of 1998. Their meeting instantly translated into a love affair as they began dating. Well, Brian indirectly hinted about their meeting in a 2019 post where he wrote how 1998 was his last Valentine’s day alone.

She Is a Mother of a Son

Melanie also has a son from her marital relationship. The duo has named their son Rhoads and they share a great relationship with her. In fact, she often posts photos of her child on her social media.

The beautiful Melaine has her hands in several fields. From acting in a documentary series to producing TV series, she has had a successful career. She began her career professionally back in 2005 where she appeared in the TV documentary series The Comedians of Comedy.

Like we said earlier, Melanie has produced several movies and TV series. She made her debut as a producer back in 2005, where she produced an episode of a TV series named One Night Stand.

Similarly, she was also the executive producer of a popular TV movie Ron Funches: Giggle Fit. Not only this but in 2020, she produced 8 episodes of the successful TV series Nice One!. Besides, she was also a talent executive for the 40 episodes of Drew Carey’s Improv-A-Ganza.

She Is Also A Talent Manager

Since 2012, she is the owner of her talent management company Truhett Management. Needless to say, she has been doing pretty well in her career.

Truhett is fond of social media. She is active on both Instagram and Facebook. As of 2020, she has decent followers on her socials and she pretty much gives the audience insight into her professional and personal life.

How Much Is Melanie Truhett’s Net Worth?

If sources are to be believed, she has around $1.5 million to 2 million in net worth as of 2021. As a producer, she earns a decent amount as her salary for her works.

Similarly, her husband Brian has over $3 million in net worth as per Celebrity Net Worth.