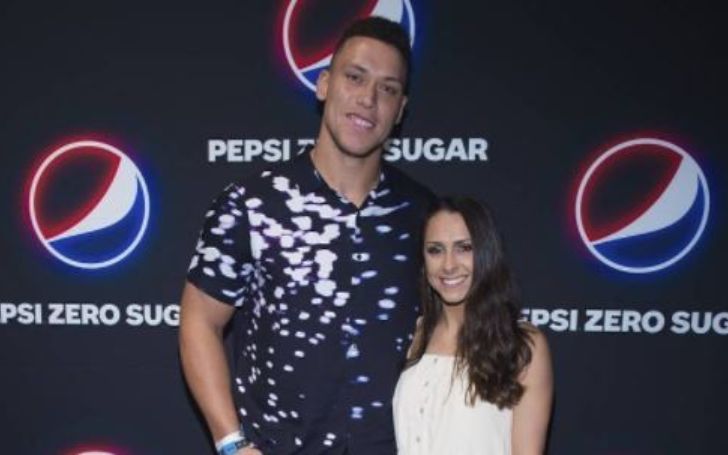 Samantha Bracksieck is a graduate of the California State University who is better known as the wife of Aaron Judge, a professional baseball right fielder for the New York Yankees of Major League Baseball. The couple has been together albeit on and off since they were teenagers.

In fact, Bracksieck and Judge are both from the same high school and the same college. Samantha’s husband, Aaron is one of the largest baseball players in history, coming in at 6’7″ and weighing nearly 300 pounds. He has won a multitude of awards throughout his career thus far, including the MLB All-Star in 2017, 2018, and 2021.

The piece down below, however, focuses more on Judge’s longtime partner, Samantha Bracksieck; know how she became the love of the Home Run Derby winner and American League Rookie of the Year. Also get a latch onto her upbringing, her career, what does she do for a living, her social life, and more.

Born on August 12, 1993, Samantha Bracksieck hails from San Joaquin, California. She allegedly though mostly grew up in Linden California also her husband’s hometown. It is a tight-knit farming community about 90 miles east of San Francisco.

Someone close to Samantha once described her and her spouse’s hometown as a Norman Rockwell kind of place, with a small downtown strip and an annual cherry festival.

It is also the same institute where her partner, Judge, a biracial played college baseball. According to her former professor and adviser, Bracksieck was an aspiring student with an independent streak.

One of her ex-professors once described Judge’s wife as very bright and very down-to-earth. She apparently has also been a humble person since her school days.

In 2017 CSU awarded Bracksieck with an “outstanding master’s-degree project” entitled “Posterior Elbow Angle During the Movement Phase of Throwing in Relation to the Susceptibility of UCL Injury in Major League Baseball Players.”

As per some insiders, after graduating from California State University, Sam moved to Gainesville, Fla., to earn her doctorate in exercise physiology at the University of Florida, but never finished.

Then in mid-2019 Bracksieck left Florida and landed a job at Exos, a massive training facility in Phoenix where many top athletes train.

What Does She Do Now?

Samantha does not have a public social media profile, and her spouse, Judge, too, does not share that many pictures of the two together on his Instagram account.

It resultantly is unclear as to what she does for a living on her own.

When Did Samantha Bracksieck And Aaron Judge Start Their Relationship?

Bracksieck and the Yankees’ no 99 got to know each other in high school in Linden, Calif. Sam was an academic year junior to her current husband.

The now-husband and wife’s high-school time relationship was out in the open only after about two years into Bracksieck’s schooling.

At Linden High School, where Sam and the future baseball star started dating, the former at the time was a star of the baseball, football, and basketball teams, while Bracksieck played varsity soccer and basketball. Rather than parting ways after high school, Bracksieck followed Judge to nearby California State University in 2011.

Bracksieck’s college professor once revealed she never flaunted her relationship with Judge, who was a big man on campus and a star baseball player at Fresno State before the Yankees selected him in the first round of the 2013 draft.

Later the distance seemed to wear on the couple and they eventually split in 2016. The reason was mostly that Judge’s career had just begun to take off, with farm-league stints in Charleston, Tampa, Trenton, and Scranton.

How Did Bracksieck And Judge Get Back Together?

After the breakup, the couple was no longer together but baseball continued to occupy much of Brack­sieck’s life one way or the other.

When they had broken up, Judge, in 2017, started dating Jen Flaum, a media strategist originally from Franklin Lakes, NJ. Flaum and Judge had even made their relationship “Instagram-official.”

But the Californian athlete and the strategist ultimately broke up and shortly after that, Bracksieck re-entered the Judge’s chambers in early 2019.

Following that, people would notice them for the first time at the Fanatics Super Bowl party together. After getting back together for good and all, they made their relationship Instagram official in October 2019.

The couple has been together ever since. After reconciling their relationship, the high school couple tried to keep their dating things away from the media.

When Did They Get Engaged?

Despite the couple not revealing much about their relationship, some people in June 2021, noticed Bracksieck wearing a diamond ring. It subsequently fueled the speculation that Judge had asked her to marry him.

Though the couple never spoke about it publicly. The pair were also too cautious not to let themselves be caught in public places. Only a few people would notice them as a couple and that too at selected charities.

Bracksieck married the Yankee’s right fielder, Aaron Judge in December 2021. The wedding took place in an outdoor ceremony in Hawaii.

The ceremony that happened at the Montage Kapalua Bay Resort had the guests including some of Judge’s teammates among others.

The small private ceremony was held in Maui on Saturday with only a handful of the couple’s closest friends and family as invited guests. The couple was publicly quiet about their wedding plans.

Samantha Bracksieck And Her DUI Incident

In February 2020, the police arrested the then Judge’s girlfriend, Bracksieck for a DUI.

Apparently the wife of the MLB star, Bracksieck was just returning from the dinner at the pricey chophouse, reportedly with Sadye Zillo, wife of the Yanks’ head of communications Jason Zillo.

At 11:50 p.m., the Scottsdale officials pulled the sports wag over because the headlights of her 2017 Honda HR-V were off, and she was traveling 10 mph over the speed limit.

When officers approached the car, they later reported, Samantha smelled like booze, and couldn’t name the cross streets near her apartment. This was despite the fact that the CSU graduate had been living in Arizona since July 2019.

Bracksieck admitted to police that she had split four glasses of wine with a friend. One cop who wrote in the incident report about that night Bracksieck was slurring her words and had bloodshot eyes. He likewise added,

“I could smell a strong odor of an intoxicating beverage coming from inside the vehicle and from her breath as she spoke,”

The authorities eventually charged Bracksieck with “extreme DUI” for an alleged blood alcohol- concentration level between .15 and .19.

The court cited her and let her go a couple of hours later. The detainment remained under wraps until May that same year.

Bracksieck initially pleaded not guilty but her case remained still pending, a Scottsdale City Court official confirmed at the time. It was also the time of the coronavirus quarantine.

A few days later, police body-cam footage from the arrest somehow found its way to the internet and revealed that the brunette had dropped her famous boyfriend’s name, asking,

Do you know who my boyfriend is?

After a while, Samantha finally told the officer that her boyfriend “plays baseball for the Yankees” ­before dropping Judge’s name.

Many say after the DUI incident Bracksieck managed to get a following of her own where people would know her other than the girlfriend of the American League winner.

Then about eight months later, Sam pleaded guilty to a misdemeanor DUI after a video showed her telling officers that her boyfriend ‘plays baseball for the Yankees…so this is not good.’

How Much Money Does Samantha Bracksieck’s Husband Make? What Is His Net Worth?

While credibility is yet to come, some analysts project by the end of the year 2022, the 2013 MLB draft will have pocketed at least $17million in salary.

Having discussed all the numbers above it’s no surprise Bracksieck’s husband has an estimated net worth of over $10million. What’s more, Spotrac claims if the Yankees are to sign him beyond the time of his free-agent status, they can expect to pay him some $203 million for an eight-year deal.

Adding always to his wealth is his reputation as one of the most sought-after endorsers.