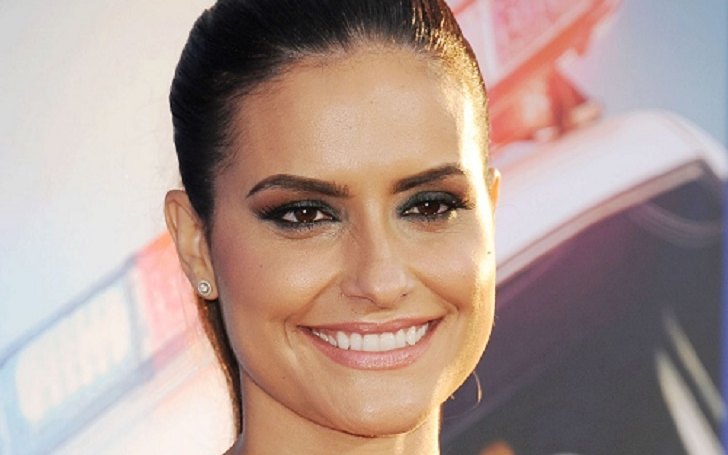 Samara Saraiva is the wife of Damon Wayans Jr., an actor and comedian. Her husband came into the light after his breakout role in the ABC sitcom Happy Endings. Damon’s role in the show also brought him the Critics’ Choice Television Award nomination.

Apart from his pro-life, Damon is also doing fantastic when it comes to his love life. The actor has been leading a happy married life with his wife Samara since 2016. Besides, let’s know does the duo has any kids? How long have they been together?

Find out all the answers to these questions about Damon Wayans Jr.’s wife Samara Saraiva here!

What is Samara Saraiva Age?

Her Parents and College

While most of her family details remain secret, sources say that her parents live in Brazil. Besides, Saraiva has two sisters named Villy Meneve and Maria Peres Horta. Her sister Maria attended Espaço Educacional Vieira Cabral in Governador Valadares, Brazil.

As for her education, Samara graduated from the James Caldwell High School in West Caldwell, New Jersey.

Besides, as far as her ethnicity is concerned, the celebrity spouse belongs to a mixed-race and is an American as per her nationality.

Samara Saraiva and Her Husband Damon Wayans Jr. are married since 2016

The couple exchanged their vows on 12th April 2016, in a private wedding ceremony. Samara and her hubby Damon are leading a blissful married life ever since.

Although Damon has kept everything about his love life to himself, his wife has shared a lot of pictures of the duo on her Facebook account. Judging by the posts, we can the two have been together for over a decade now.

Samara has uploaded photos with her then-future hubby Damon since the early 2010s and onward. Back in Jan 2010, Samara shared a picture of themselves celebrating the new year 2010. Her Facebook account is flooded with several other pictures with her spouse Wayans Jr.

The two also made a few public appearances together. On August 7, 2014, they attended the premiere of Twentieth Century Fox’s Let’s Be Cops at ArcLight Hollywood in California.

In November of 2014, the couple appeared at El Capitan Theatre in Hollywood. It looks like they dated for several years before walking down the aisle.

Samara is the mother of three children

Saraiva shares three kids with her hubby Damon. They have two daughters Berlyn and Lua Wayans. Damon Wayans Jr.’s wife Samara gave birth to their third child, a son Maverick Kai on 22nd June 2013. He was 6lbs.4ounces 19 inches at the time of his birth.

Samara announced the birth of her child, posting a sweet photo of her newly born boy on Facebook on 26 June 2013. She also has shared many other beautiful images of her son on the account.

The family of five currently resides in Los Angeles, California.

Wayans Jr. was previously in a relationship with the reality TV star Aja Metoyer. From their love affair, they also have two daughters named Aniya and Amara Wayans.

The former flames never revealed when the two first met and how their relationship ended. Following their separation, the two have shared joint custody of their girls.

Damon Wayans Jr. said in a court declaration back in 2018 that he wants primary custody of his daughters because of Aja’s “inability to prioritize their education.” But, later on, the court granted them equal custody.

Metoyer, after her split with Wayans, began dating Dwyane Wade, a professional basketball player. They also have a son Xavier Zechariah Wade, born in 2013.

Saraiva has just been in the spotlight for her high-profile relationship with Damon. Unfortunately, the information about her professional life is totally unavailable. Talking about her husband Damon Wayans Jr., he is one of the prominent faces in the entertainment industry. He landed his first role in the movie Blankman in 1994.

Damon subsequently made his move to TV, making his debut with the role of John in the series My Wife and Kids (2001-04). He played the main character in the TV sitcom New Girl for four seasons (2011-13) and again appeared in the project from 2016 and 18.

Damon also played the central role of Jake Davis in Happy Together. Furthermore, the actor snagged the main character in a mystery drama miniseries The Truth About The Harry Quebert Affair in 2018.

In addition to his TV roles, Damon is also credited for his work on big projects. His films include Someone Marry Barry (2014), The Land Before Time XIV: Journey of the Brave (2016), and Trouble (2019).

He also popped up in the upcoming drama Barb and Star Go to Vista Del Mar.

The exact amount of her net worth isn’t revealed yet. Talking about her spouse, Damon, he has a net worth of $9 million in 2022. His successful acting career is the primary source of his income. The couple resides in their house located in Los Angeles.

On the other side, his father, Damon Wayans Sr.’s wealth is $35 million.

Where is Samara Saraiva Now? Her Social Media

As of 2022, the celebrity spouse resides in Los Angeles, California with her husband and children. Besides, talking about her social media activeness, Damon Wayans Jr.’s wife Samara is active on Facebook, where she mostly shares her husband and kids’ photos.