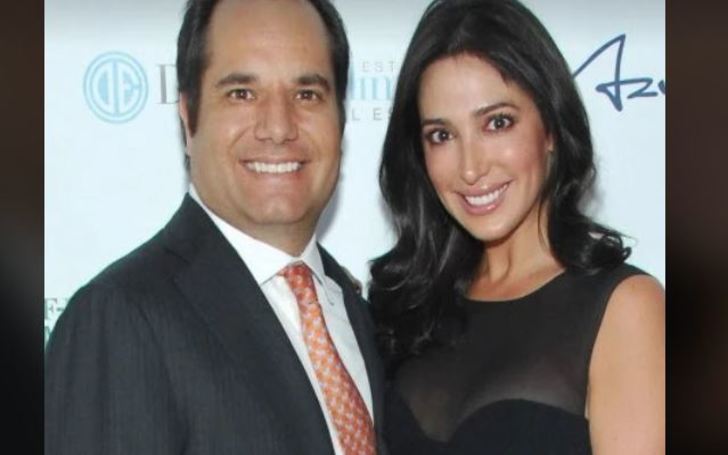 Andrew Silverman is a real estate mogul. Hailing from New York, he is a finance manager, land engineer, and business person. He got the media attention after his ex-wife, Lauren Silverman, a socialite famously cheated on him with the British television personality, Simon Cowell in 2013.

Andrew may not be among the kinds of tycoons who command the city’s hard-to-catch spotlight. However, after the infamous affair, he became the trending guy. For months he was one of the integral factors to discuss for many tabloids.

He also got entangled in the glare of ensuing press coverage. Andrew was not popular for talking about his personal life with the media. He nonetheless provided several quotes and photo-ops to the press regarding his wife’s infidelity.

Down below, know all about Andrew Silverman; his origin as a businessman, how he met his former spouse, Lauren, what really went wrong between the two, how British music veteran Simon Cowell became the villain in his life, and many more.

Andrew presumably was born in Manhattan around 1977. He grew up in an Upper East Side co-op. He is the son of wealthy real-estate owners, Allen Silverman and his wife Eleonore. Lauren’s ex-husband has a younger brother, Alex.

Silverman’s parents founded property company The Andalex Group by combining their sons’ names, Andrew and Alexander, in the 1980s. The Silvermans also own a string of Manhattan apartments as well as a $4.5million country home in Stamford, Connecticut.

Mr. Silverman used to sit in on his father’s business meetings as a child & work summers at the office as a teenager. After some time he also started doing legal work for the company.

His brother Alex once said Andrew was always kind of a leader in his own mind and ahead of the ball game.

Andrew graduated from the University of Pennsylvania and began his career on the trading floor of Credit Lyonnais. After that, he became the chief investment officer at the family’s firm, Andalex.

He along with his brother owns Andalex, a firm that specializes in the acquisition, development, and management of commercial, retail, and residential properties in the United States.

Andrew And His Ex-Wife, Lauren Silverman Met Each Other In Their 20s

Andrew Silverman and Lauren, in total were married for 10 years. Their marriage started in the early 2000s and ended in November 2013.

They wed when both of them were in their mid-20s and later became parents to one son, Adam.

The real estate developer met Lauren in his early 20s when she was a frequent presence in the city’s social scene.

Starting in 2000, the couple had been living in a stunning apartment on the Upper East Side of Manhattan in a ‘white glove condominium’ aptly named The Savoy.

His Ex-Wife, Lauren Cheated On Him With British Celebrity Simon Cowell

In mid-2013, the news broke that she was pregnant with America’s Got Talent judge, Simon Cowell. Simon had impregnated Andrew’s then-wife, Lauren, in around July 2013. As per several reports, Andrew Silverman had just upgraded her ring with a 10-karat diamond.

Lauren met Cowell through Andrew when the former was vacationing with him in Barbados. Simon then was still married to Mezhgan Hussainy. Simon and the businessman, Andrew had known each other for a while.

Later news started to emerge all stating Lauren was not only sleeping with Mr. Cowell but in love with him. She also had conceived his baby.

What Went Wrong In Andrew And Lauren’s Relationship?

There were rumors that Andrew and Lauren were having problems in their marriage for some time. In addition, Andrew’s parents Eleonora and Allen were also not very fond of their former brunette daughter-in-law. They were not even present at their wedding ceremony.

Apparently, the former couple, Lauren and Andrew would plan trips for a month but Andrew would ditch the holidays for business. Lauren would then go on those trips alone reportedly even leaving their son Adam for long periods. Allegedly she started having an affair with Simon during one of the trips.

Lauren later explained Andrew, too traveled all over the world, partying with different girls, and stated this was why she got close to Simon.

After Knowing About The Affair, Andrew Filed For The Divorce

Despite the scandal involving high-profile celeb, Andrew and Lauren decided to settle the divorce quickly and quietly.

Reports at the time suggested Lauren got around $2 million after her separation from her New Yorker ex-husband. The former couple though agreed on a condition that forbade Cowell from going near their son, Adam. Though that clause expired in January 2015. The condition initially came from the New York-based businessman.

It was Andrew who filed for a divorce, stating adultery as the prime reason. The Andalex’s co-owner also wanted full custody of their son Adam. He additionally accused her of being cruel and inhuman.

Page Six reported, there was a secret meeting before the Silvermans’ divorce proceedings between Cowell and Andrew to clear the air and ensure Andrew didn’t criticize Cowell in the press.

What Lauren Silverman Said About The Affair

Lauren, on the other hand, claimed Andrew knew about her relationship with Simon and that they had an agreement in place.

She explained Andrew was aware of her calling Simon multiple times a day. Lauren added her ex-husband also knew that she and the X-Factor panelist were in love and had planned to marry him.

Lauren also did not agree with giving him full custody of her first son. She explained Andrew was hardly around and would not have time to take care of Adam as she would.

In the 2014 interview, Andrew talked about how he felt after knowing his then-wife’s affair with Simon. The father of one said,

“a very difficult time in my life . . . I am a regular person, not a tabloid thing. It was a fascinating experience, unexpected and shocking.”

He additionally added he doesn’t care about being in the public spotlight and that it was never been his way. Silverman stated he tried to be as quiet as possible even though everyone wanted to hear about the “hoopla.”

Simon Cowell Admitted He Was Not Proud For What He Did

In another interview, Cowell explaining himself said the affair

“is not something I am proud of or wanted to happen in terms of hurting anyone,”

In 2015, news circulated all reporting Andrew is about to get married again moving on from the whole Lauren-Simon thing.

In August 2015, he got engaged to ­Samantha Lerner Zimmerman, a brunette who some claim looks similar to his former wife, Lauren. Andrew asked her to marry him in the Hamptons. Lerner, herself was the wife of Matthew Brett Zimmerman, a former Bear Stearns exec, who died in December 2012.

Samantha, as per the reports, is a mother of two. Her late husband, Matthew Zimmerman was an executive at Bear Sterns.

A friend of Andrew told the Manhattan resident was happy and he requested privacy and his son with Lauren was also doing well with both parents; with Simon and his dad’s new partner.

Andrew and Samantha are both apparently distant from sharing their everyday deeds to social networking sites like Facebook, Insta, or Twitter. Accordingly, it is unclear if/when the couple married or has started a family of their own.

Lauren Silverman After The Divorce

Andrew’s former spouse, Lauren, and Simon are still together and have been since she broke things with her ex-husband, Andrew for good and all. They welcomed their son Eric on February 14, 2014. This is Cowell’s first-ever child.

What’s worth the attention is despite being the hot topic among many media outlets for enough span, many people still were/are unaware as to what Lauren does professionally for a living.

In Dec 2017 several outlets started reporting that the warring pair, Andrew and Simon buried the hatchet and decided to be on friendly terms. Interestingly, it was Andrew who made the first move towards reconciliation.

At the time, they were even considering a holiday together with their new families.

Andrew has been around richness or financial security since his childhood. His father was an entrepreneur for as long as he could remember.

His family owned a waterfront home in Stamford, where a teenage Andrew and neighborhood teens would cruise around the coastline in their Boston Whalers.

As an adult, he, himself is also notorious for making millions either through their father’s empire or independently. He has properties in places like Englewood Cliffs, N.J, a condo in Long Island City.

Andrew and his brother also own a casino in Panama. Additionally, under his company, Silver mark comes Florida Gaming Centers. The group is the stalking horse bidder on the property.

Not to mention, his current wife, Samantha Zimmerman also inherited handsomely when her former husband died.

In light of all the aforesaid stories, for some, it may be an understatement in knowing Andrew Silverman holds a net worth of only around $30million.

Worth mentioning is he still lives in the $6 million Upper East Side apartment where he was raised.

In March 2014, it was reported that Andrew was a member at a gun club downtown.