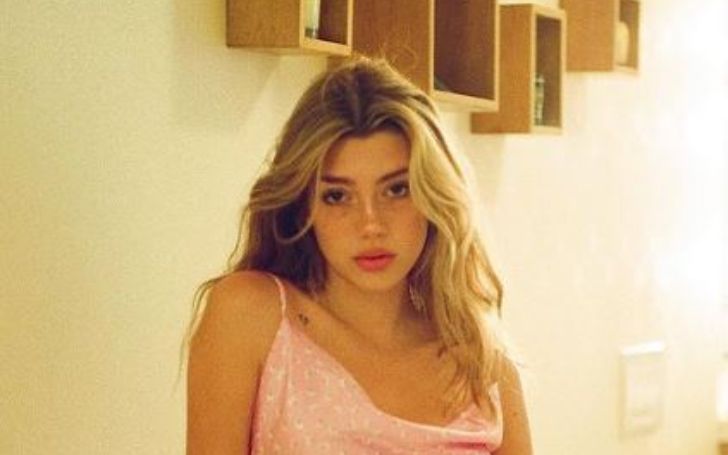 Sissy Sheridan is one of the rising actresses and social media influencers who gained a lot of fame and a huge fan base via the internet. The 18 years old TV actress has already appeared in several films and web series to date.

She is currently dating fellow influencer Sunny Suljic. Moreover, in 2021, Sheridan made it to the headlines after she accused her ex-boyfriend Miles Despair of grooming minors.

How rich is she now? Does she have another name? To know more about Sissy Sheridan tag along with us.

How Old Is Sissy Sheridan? Details Of Her Age & Height

The rising actress Sissy Sheridan was born in Washington, DC, on 15th June 2004. She was born under the birth sign Gemini. She recently turned 18 years of age in 2022.

Sheridan is of white Caucasian ethnicity and holds the American nationality. She stands 5 feet 5 inches or 165 cm tall in height.

She has an older brother named Julian who is two years older than her. Likewise, she attended Laurel Springs School online course for freshmen high school.

Back on 4th September 2018, Sissy Sheridan uploaded a video titled ‘the real reason I’m being homeschooled’ where she talks about her school life.

In the video, she revealed that she was homeschooled during freshmen year as she was taking part in Billy Elliot happening at the signature theatre.

Sheridan also revealed that she will be playing in several other shows. She also added that she didn’t want to miss out on her education while working in LA.

How Did Sissy Sheridan Land Roles In TV Shows & Plays?

Apart from being a social media personality, Sheridan landed her first role ‘Sam’ at the age of 12 in the short film Paper Airplanes. She then appeared as Katie Edwards in the TV series Copy Killers.

Similarly, the 18-year-old used to post cover songs on her self-titled YouTube channel before releasing her single ‘Most Girls’ in 2019.

The actress is best known for playing Angie in the television series Chicken Girls alongside Jules LeBlanc, Hayden Summerall, Dylan Conrique, and others.

Some of her other notable work credits include DIY with Me, Maniac, For Hope, The Catcher, and Old Man Rush.

On 8th February 2020, she released her second single Who Me? on her YouTube channel. The video has over 256k total views and over 9.4k total likes.

Her songs can also be streamed on Apple Music and Spotify. Moreover, she has around 1,038 monthly listeners on Spotify.

Sissy Sheridan Is Dating A Boyfriend in 2022

The singer-actress is currently dating fellow rising actor, social media influencer, and skateboarder Sunny Suljic. The couple sparked dating rumors around Oct 2021 after Sissy posted a photo of her hugging a guy who was speculated to be Sunny.

And on Feb 16th, 2022, she openly announced her relationship with Sunny by posting a series of photos that include her kissing him on the lips as well.

As of now, the couple has both gone Instagram official with their relationship and are living their days happily.

Previously, Sissy was dating social media influencer Miles Despair. As per the source, they began dating around mid-2020 and part ways a year later in 2021.

When the former couple parted ways, many fans speculated that the reason was nonother than grooming allegations against Despair.

Back in July 2021, Miles was accused of grooming minors, sharing undressed pictures of him, and asking for similar pictures with underage girls.

Similarly on 4th Aug 2021, Sissy released a statement on Twitter where she confirmed the grooming accusations saying,

“These allegations that have come out online about the minors are 100% real.”

Likewise, she urged her fans and followers to unfollow Miles and asked them to never support him again. In his defense, Miles posted a series of IG stories saying sorry for his actions. He revealed that he didn’t know the girls were minors and that he blocked the girls as soon as he found out about their real ages.

As of this writing, there are no new updates regarding the allegations.

What Is Sissy Sheridan Net Worth In 2022?

The 18-year-old actress is reportedly worth around $500 thousand in 2022. She earns her growing fortune from her versatile career.

Similarly, Sissy also pockets a decent amount with her endorsement deals and commercials with big brands like ZAFUL, GOAT, Rowan, Praying, and more.

Sissy Dislikes TikTok Despite Her Fame In The Platform

Chicken Girls star’s fame got a boost when she started gathering millions of followers on the video-sharing app TikTok. Thanks to her 6.3M million followers, Sissy earns thousands of dollars from the app.

However, during an interview, she revealed that she dislike the app. She said,

“TikTok Sucks. Like, TikTok is the most toxic thing. But if you’re not on it, you’re not popular and you’re not relevant, and kids know this.”

Well, no matter how much she dislikes the app, she regularly uploads her videos.