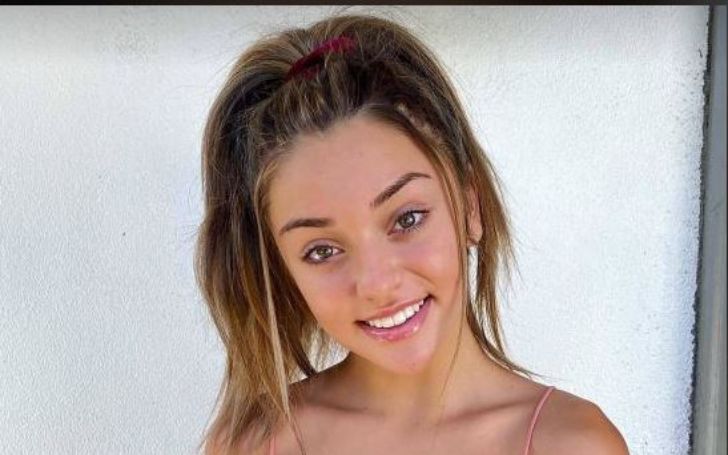 Presley Elise is a growing teenage internet influencer, model, learning actress, and professional cheerleader. Elise’s popularity is synonymous with her 100k plus followers Instagram handle and Tiktok posts with close to half a million likes.

At only 10, Presley Elise was gaining attention no less than that of today’s A-list Instagram and Tiktok stars. And clearly, it is just the beginning for the young model.

Get to know this fun-loving, positive, and extremely talented cheerleader; find out the best moment she has had being an internet celebrity, what are her likes, her personal life; does she have a boyfriend, her future endeavors, and more.

Presley Elise Was Born In Louisiana: Her Parents and Other Details

The five-foot-five-inches tall Presley Elise was born on December 8, 2007, in Baton Rouge, Louisiana. She though mostly grew up in Gonzales, Louisiana. Her family members or people closed to her also call her Pres.

As for her parents, Presly fully Presley Elise Lavergne is the daughter of Jennifer (mother) and Kade Lavergne (father). Her father previously worked as a crane operator at Kinder Morgan. She also has a brother named Preston Lavergne.

The model once revealed that she looks up to her mother who she says has gone a lot for her and her brother and somehow managed to keep it all together.

Similarly, she is the granddaughter of Kim Lavergne and Brenda Rossi Lavergne.

Presley Elise As A Cheer Leader And A Model

Elise started to cheer when she was 4. It, however, wasn’t until school that she started doing it competitively.

To say more, Presley, a Sagittarius is a Cheerbrats Collection representative as well as a Rebel Athletic Junior Model. She is also a member of the Louisiana Cheer Force.

There are so many reasons I love to cheer, but the main one is performance. I love to perform, love the life experience I’ve gained from cheer just time management, how to work with different kinds of people.. taking care of my health and body.. building relationships, and learning to set goals and crush them!

The young model additionally has also appeared in numerous ads for local businesses as well as for global designers such as Elisa B. Elise has also posted a paid advertisement of herself wearing leggings from the J80 Fit athletic line.

In one of her Instagram lives, she said her dream is to become a veterinarian and she definitely thinks about going to college.

How Did Presley Elise Become Famous?

Elise rose to internet fame when TikTok had just started to gain ground, something that the brand promoter revealed herself in Sep 2021.

When doing an interview with Famous Birthdays, talking about the point where she catapulted into famousness, Elise said,

“It was on or I think tik tok had just become a thing and it was something musically, I think. But it was a tik tok video or a musical video of me doing a cheer, basket and … yeah I think that was the first time.”

During the interview, Elise also revealed she at the time had just started acting classes and had gotten new management. She then revealed that she was hoping to be in the movies someday or even commercials.

Elise added that she was loving the acting and found it fun. She said to her acting really fun despite people believing it to be hard.

She Is Addicted To Phone

Presley admits she loves her phone a bit too much. When asked what would be the three things that she would take in the event that she was all alone on an island, the teenager responded,

Definitely food (zesty ranch, veggie straws). My phone because I definitely need that 24 7 all day everyday on me to watch TikTok and make content for you guys (followers).

Does Presley Elise Have A Boyfriend?

Presley does have a boyfriend. This she has confirmed or better yet paraded herself during many of her interviews, Youtube videos, and Instagram lives. They’ve been dating as early as June 2019.

When doing Q and A on the Famous Birthdays in Sep 2021 as she answered one of the questions from her fans that asked what she prefers to do when she is alone, Presley replied,

I definitely like to hang out with my boyfriend. That’s number one. I like to be outside, hang out with friends and family and all of the above.

With her boyfriend, she has also done a handcuff challenge for 10 hours (in real for five minutes) in 2019 which she says is one of her best YouTube videos.

Elise had also gone to homecoming with her boyfriend. The couple has been mentioning their affections for each other for a couple of years now be it on Elise’s vlogs or through their respective socials.

I like his personality, his smile because he’s really cute and a lot of other things.

said the brunette celebrity when talking about what she likes about her boyfriend.