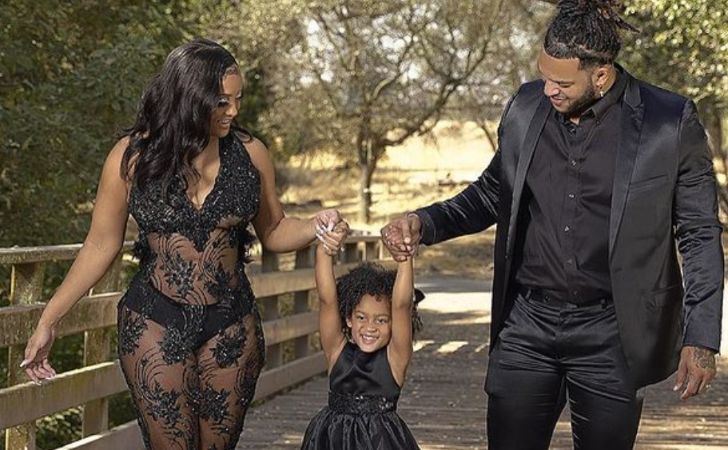 Jacob Payne is a professional football player who shot to fame as the husband of the Bad Girl star, Natalie Nunn. She is a reality TV star famous for the shows like Bad Girls Club, Love Games: Bad Girls Need, Bridezillas, Celebrity Big Brother, Baddies, and more.

Even though Payne was already famous after his marriage to Nunn, he got the spotlight when he appeared in the reality shows;  Bridezillas and Marriage Boot Camp with his wife. The couple had lots of ups and downs in their relationship but were able to pull off through their wedding. Furthermore, he is also a father to a daughter.

Amidst all the happiness between the husband and wife, the news of Jacob’s spouse cheating on him spread like fire. There were many speculations regarding their breakup and divorce. So, were the talks true? Are they still together? How did she cheat her beau?

Stay with us till the end to find out the truth about the rumors. Furthermore, find out about Jacob Payne’s child, career, net worth, and if was an NFL player as well.

Jacob Payne Was Born In Detroit

The football player was born in 1990 in Detroit, Michigan, US, and is 32 years old as of 2022. Born under the birth sign Cancer, he celebrates his birthday on 18 July. Likewise, he has American citizenship and belongs to a Caucasian ethnic background.

Though Payne opened his eyes in Detroit, he later moved to Lansing with his family and spent his childhood there. Since he was already an adult when came to the limelight, the details about his early life are scarce in the media. In addition, he hasn’t talked about his parents and siblings as well.

Meanwhile, he has uploaded a picture wishing his younger brother Jalon Payne, a “Happy Birthday.” Since there are two boys in the photo, maybe he has two brothers. Yet, we don’t know if he has more brothers and sisters.

Talking about his academic qualifications, he completed his study at Central Michigan. However, further details about his educational background are behind closed doors.

Who Is Natalie Nunn’s Husband, Jacob Payne? His Career Details

Jacob Payne is a professional football player who played for Arizona Rattlers as a wide receiver and also calls himself a “fitness guru.” There were also rumors that he was an NFL player but that is untrue.

Despite his career in sports, Payne came to notice after his relationship with his spouse Natalie Nunn. Moreover, he became popular when he appeared in the reality shows;  Bridezillas and Marriage Boot Camp alongside his wife.

Furthermore, Payne is also into music these days. He has a Youtube channel of his own and uploads his songs and music videos there. Regardless, he is yet to be popular as a music artist.

The football player walked down the aisle with the Baddies’ star on 5 May 2012 after dating for some time. Before tying knots with his beautiful wife, he proposed to her in April, a month before their nuptials.

The couple was on the island of Jamaica in Negril for a vacation trip when Payne dropped down on his knees and asked her for marriage. The bride-to-be said “yes,” ready to be Mrs. Payne. The vacation trip turned into a surprise trip for his then-girlfriend.

After a month, the pair celebrated their wedding ceremony in Topanga Canyon, California. It was a private party that took place at one of their friend’s mansions with about 50 to 60 guests including their close friends and family members.

Though Jacob and Natalie’s wedding party was private, the video was broadcasted on three episodes of We TV’s show, Bridezillas. Since many people were calling their nuptials fake, the clips of their ceremony helped in shutting them up.

When Did Jacob First Meet His Wife, Natalie Nunn?

Most people don’t believe in love at first sight but it happened in Payne and his spouse’s case. The pair came across each other at a club in Detroit in 2011 and instantly felt the spark between them.

The reality TV star was there because of her work while her then-boyfriend was already there along with his friends and the promoter of the club. She fell in love with him at the first sight and the pair soon were in a relationship. Jacob’s sweetheart in an interview in 2012, stated about it.

“He was so charming and handsome, I fell in love at first sight. He then came to LA to visit me and never went back.”

The husband and wife at that time lived in separate cities, and thus, they had a long-distance relationship. However, it wasn’t always like that as the celebrity husband came to Los Angeles to visit his girlfriend after two months of affair and settled with her.

Payne is a Father To a Daughter

Following the lovebird’s marriage, Jacob Payne and Nunn became parents to a child. The couple was delighted to welcome their first bundle of joy which the wife announced on 22 November, 2o16 through her Instagram.

Natalie said she was praying for a child and her prayers were heard. In fact, she was already 20 weeks pregnant during the announcement of having a baby girl. In due course, they welcomed a beautiful daughter on 16 April 2017 and named her Journey Ruth Payne.

His Wife Previously Had a Miscarriage

Prior to the birth of Journey, the Bad Girl Club star had announced being pregnant in November 2014. However, she had a miscarriage with her first baby which she kept private. But when she was questioned about faking her incubation, she revealed about going through the painful experience.

As the matter of fact, she even suffered from depression and weight gain which is why she went to the gym. Regardless, the public speculated it in the wrong way without knowing the truth.

Did Jacob Payne’s Wife Cheat Him?

Chloe Ayling shockingly came to the media and confessed to having a sex act with Dan Osbourne and the Bad Girl Natalie which happened in 2018, after a heavy drinking night in London.

“He had full sex with Natalie in front of me in the bathroom, and then kissed and performed a sex act on me.”

According to tabloids, Dan was trying to meet Natalie for some months and even messaged her. But she didn’t go to meet him. A close source said;

“Dan really wanted to meet up with Natalie, they were going to go  to dinner or a club, just the two of them.”

When the 32 years old then found out about the DMs, he didn’t let his spouse meet with Osborne. He even thought that Dan wanted to hook up with the reality TV star and found it very strange for a married man to meet a woman alone.

Are Jacob and Natalie Still Together?

Well, after the news broke, the Payne was completely shattered. He broke up with Natalie and left the house with his stuff on December 6, 2019. The father of one said that he is staying with his friend as he needs some time alone and will find out what the truth is. Later, he was roaming in London alone without his wedding rings which made the people think they are going to divorce.

Regardless, the duo was witnessed being romantic together in the streets of London at the end of the same week. Maybe the couple wasn’t ready to give up on one another and sorted things out between them. Subsequently, they went to the Marriage Boot Camp to make their relationship better.

Like most husbands, Jacob Payne is also protective of his wife. He doesn’t like his spouse posting half-naked pictures on her Instagram or doing bad girl kind of kinds of stuff such as twerking and all. In fact, this is the main reason the couple has an argument every time.

Therefore, Natalie is doing her best to save her marriage, especially after the controversy, and trying to be a good wife. She also said going to Marriage Boot Camp has somh0w helped them in their relationship. She is trying to control the Bad Girl side inside of her but yet stated she can not be a 100% good girl.

How Much Is Jacob Payne’s Net Worth?

The Michigan native is a football player by profession. Except for this, he hasn’t mentioned if he has any side business. As of 2022, he has a net worth of $100,000.

On the other hand, his wife has total assets of $0.5 million. She has amassed her income through her career as a TV show star, producer, author, and entrepreneur.

Yes, he has an Instagram account by the name Jacob Payne with 43.9K followers and 76 posts. He is active on this platform and keeps updating about himself and his family through it.