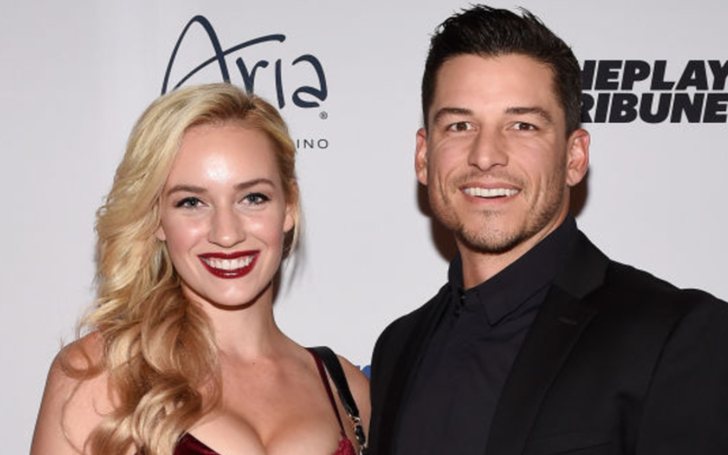 Steven Tinoco is a former minor league baseball player who is better known as the husband of an ex-professional golfer, Paige Spiranac. He used to play as an outfielder, First and Third Baseman.

Although, Tinoco, himself a former sportsman, it was the linkage with his social media famous wife, that he started to grab attention. There, nonetheless, is a significant story of Steve even before his relation to Paige.

The fitness mentor’s pivot from pro athletic career to instructor is a story to look at. So here lies all the details of Tinoco’s journey from his high school to marrying a golfer and even beyond.

Tinoco Is An Ex-Student Of The California State University

Steven Tinoco was born on April 11, 1988, in Coto de Caza, California. The son of Robert and Paula Lynch went to Tesoro High School where he played baseball, football, and was in the Peer Assistance Leadership Program. Steve is yet to discuss his ethnicity.

As a teenager Tinoco was a four-time all-league pick earner, was a first-team all-county and all-CIF honors. He hit .402 as a senior with 17 runs and 38 RBIs and .391 with 27 runs and 29 RBIs as a junior. Steven scored five homers and had a .693 slugging percentage. The California native set 10 school records, batting .400 and driving in 103 RBIs in his career.

He was also a member of a football team that won back-to-back CIF championships. Steve was also an honor roll student.

As a freshman, Tinoco appeared in 34 games with 22 starts. He batted .326 over 86 at-bats with 17 runs, 17 RBIsHad including two home runs and three doubles.

The following year also his final, Tinoco started as the first baseman for The Dirtbags. He played in a total of 37 games, starting in 36. He led his college team with a .343 batting average and slugged .543. That year, the six-foot-one outfielder was the second-best on the team, as was his five home runs. He finished his final college season with 30 RBI, third on the team.

As a senior, he had one of the best single games in Long Beach State history.

Steven Tinoco Is A Former Baseball Player; His Stats

After college, the former student of CSU started playing minor league baseball for the Hudson Valley Renegades. Earlier, in June 2010, Tampa Bays Rays had selected him in the 34th round before deploying him to several minor league teams. He made a total of 68 appearances for the Hudsons before becoming the player of Bowling Green Hot Rods.

Tinoco would next play for the Charlotte Stone Crabs of the double-A league (Florida State League).

In 2013, Spiranac’s future husband started playing for the Tampa Bay Rays minor league team, Montgomery Biscuits (Southern League). Steven then moved back to Charlotte Stone Crabs. A year later he went to Sioux Falls (American Association) for whom he would make 91 appearances before joining Joplin Blasters (American Association) where he played a total of 76 games.

In May 2016, Tinoco ended his baseball playing career while being the player of both the Blasters and the Lincoln Saltdogs (American Association).

Throughout his stint as a minor league player, Steven played for a total of 6 seasons (mostly as a left fielder) with combined game appearances of 485 during which he scored 1976 turn batting, 1754 at-bats, 218 runs, 477 hits, and 10 home runs.

While playing for the Hudson Valley Renegades, Tinoco was also working as an assistant for Gold’s Gym. In fact, he remained with the company until the retirement of his playing career.

After quitting baseball, the Coto de Caza- born former collegiate athlete got a job at RIVALUS in Scottsdale, Arizona. In May 2017, Tinoco began his career as a certified personal trainer at Six Zero Six Fitness. He got his certification as a trainer from NESTA.

Steven married the Sports Illustrated model/golfer, Paige Spiranac in 2018. They spent their honeymoon in Hawaii. Tinoco had asked Spiranac to marry him two years earlier, in December 2016. At the time, the couple was on a trip to Dubai.

The former golfer and the trainer reportedly met while playing junior golf. Spiranac in 2017 through her Twitter revealed Tinoco, however, showed no interest in her.

“He’s in a relationship and I’m engaged. I flirted with him in junior golf but he rejected me haha been mending a broken heart since then,”

Spiranac says her trainer husband is very encouraging of her aspirations. She revealed she met him at the start of her career and that how understanding he is of her doings. Paige explained her spouse is well aware of the fact that this is all business for her. “He will say, ‘Hey show a little more cleavage,’ ” the Colorado-born golfer quoted her husband.

Tinoco’s spouse Paige also was into sports. She played college golf at the University of Arizona and San Diego State University. She is the winner of All-Mountain West Conference honors during the 2012–13 and 2013–14 seasons.

She was also a member of the Aztecs team to win their first Mountain West Conference Championship in 2015.

In August 2016, the Colorado-born golfer competed in her first LPGA Qualifying Tournament, vying to earn a card to play on the professional circuit. She, however, was unsuccessful. She has competed in events like Cactus Tour, LET, and Ladies European Tour.

Steve’s wife, Spiranac is often dubbed as the hottest golfer. She is among the few female golfers who have posed for the Sports Illustrated Swimsuit. Equally important is the fact that she is the most followed golfer on Instagram as of 2021.

While talking on the “Playing A Round” podcast in Dec 2016, Tinoco’s wife explained why she chooses to stay mum about her relationship status, especially on popular sites like Facebook or Insta.

Otherwise an open book to her nearly three million Instagram followers, Spiranac explained she’d prefer to keep elements of her personal life private. She stressed how having a public relationship is difficult; and as soon as one makes it public, they’re giving everyone the right to ask questions and they have to then answer them.

“If I do post about it, and I end up breaking up with that person, I then have to talk about the break-up cause I owe that to everyone because I made my relationship public,”

She added she likes to leave her relationship and her family and things those who are really really important to her out of her social media handles. Spiranac pointed to the fact that it was her choice to become a public figure, not those within her inner circle.

Along with being a trainer and a husband to a celebrity athlete, Tinoco also holds Guinness World Records.

In Feb 2018 PGA Tour golfer Tony Finau and former minor league baseball player husband of Spiranac set a new Guinness World Record for most golf balls caught in one minute from 100 meters away, completing 12 hit-and-catches just before time expired. The standing mark was 11 successful pitch-and-catches in a 60-second period.

On their final attempt, the pair got in perfect sync with the former Charlotte Stone Crabs player catching the record-setting 12th ball with just a fraction of a second to spare.

The duo agreed to achieve the feat on behalf of the 18Birdies brand who wanted to break this record to bring attention to their new brand ambassadors.

While there may never be a way to even approximate how much Tinoco made during all those years as a pro baseball player, it is possible that he must have at least raked some amount to kick off a venture of his own.

An entrepreneurial fitness skipper, Steve has quite a name in the industry. Additionally, he owns Rival Nutrition, a supplementary product for those who like to remain in shape. The former first baseman’s net worth nevertheless is just a matter of time away to be known. In any case, it’s very likely that he is doing quite great in terms of finances and monetary issues.