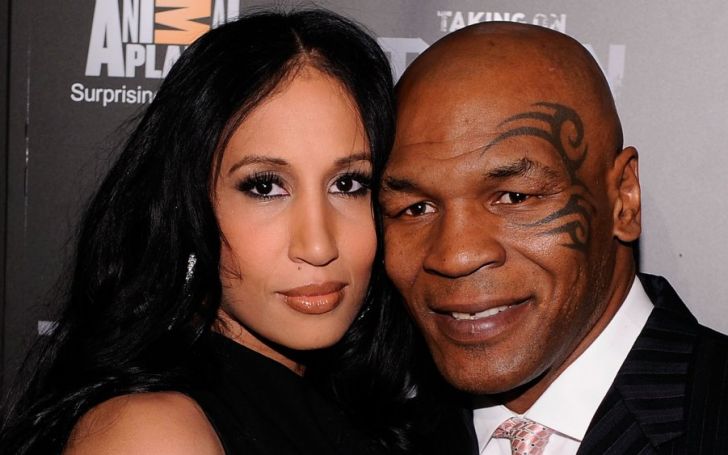 Lakiha Spicer is a celebrity spouse famous as the wife of Mike Tyson. Her husband, a legendary boxer, is revered as one of the greatest heavyweight boxers of all time. Moreover, Tyson is also the youngest person to win a heavyweight championship.

Besides, his wife Lakiha isn’t a normal person either. She is the daughter of Shamsud-din Ali, a Philadelphia boxing legend and a member of Philly Black Mafia. She grew up in Philadelphia.

We’re sure many of you are curious to know how did Lakia first met Tyson? Well, in this article, we shall find out along with other interesting facts!

Who is Lakiha Spicer? Where is she from?

Lakiha ‘Kiki’ Spicer was born on June 11, 1977, in Philadelphia, Pennsylvania. She is the youngest daughter of Shamsud-din Ali and Faridah Ali. Talking about her ethnicity, her mother is a White-African American, while her dad is an African-American.

She grew up in a Muslim household. Her father was born Clarence Fowler and he later converted to Islam. Her dad was a boxer and a member of Philly Black Mafia, an African-American organized crime group, based in Philadelphia.

Lakiha has one older brother

Shamsud and Faridah, aside from Lakiha, are also a parent of Azheem Spicer, born on January 31st, 1974, in Philadelphia. He currently resides in Germantown Avenue, Philadelphia. Both Lakiha and Azheem were raised in a Muslim household.

Azheem did boxing during his younger days, however, he later quit. He then decided to try out different businesses but it all failed. But ever since his sister married Mike, his life also turned around. Both Azheem and his brother-in-law started working together.

At the moment, Azheem works as an Executive Producer at Hotboxin with Mike Tyson. In addition, he also co-founded Tyson Ranch and Mike Tyson’s Legends Only League.

Lakiha Spicer’s family has been involved in criminal cases

Her father Shamsud being a member of the Mafia was riddled with criminal cases throughout his adult life. In the 1970s, authorities convicted him of murder but the charge was later overturned. Back then, he served jail time at the infamous Holmesburg Prison.

In 2005, Shamsud gained wide media attention after being charged with numerous racketeering charges. The probe started out as a drug investigation. At the time, Ali was sent to prison for 7-years.

Further, in 2004, Lakiha’s mother Faridah was accused of defrauding a city community college for about $224,000. According to reports, her mom set up an adult education program that didn’t have any students & non-existent classes.

In the same case, Lakiha and her brother Azheem also got indicted for accepting money to teach courses in the same non-existent program. She was sent to prison in 2008 and served a couple of months in federal prisons. A week after she went to the prison, Kiki found out she is pregnant with Tyson’s first child.

When Lakiha was 18-year-old, she first came across the veteran boxer. It was the controversial boxing promoter Don King who first introduced them to one another. At the time, Spicer had gone to watch Tyson’s boxing match alongside her dad.

Upon meeting for the first time, Lakiha was drawn towards Mike, it might be thanks to his truthful personality. Nevertheless, Don suggested Mike not involve himself with Lakiha or any other member of her family. In his own words, they were “not folks to mess around with.”

Despite all the warnings, the pair eventually fell in love with each other.

The pair exchanged vows on June 6th, 2009. The beautiful nuptials took place at La Bella Wedding Chapel in the Las Vegas Hilton Hotel. The ceremony in itself was a private one with only a few of their friends and family in attendance.

When they married, Mike was still wasn’t over his daughter Exodus’s death. When his 4-year-old infant died, it was Lakiha who supported him throughout his difficult time.

But the initial stage of the relationship was a challenge for both of them. Initially, they weren’t allowed to live together due to their respective convictions. For some time, both of them maintained two different homes in Las Vegas.

Besides, this was the first marriage for Lakiha, while it was the third for Mike. He was previously married to Robin Givens and Monica Turner.

Lakiha Spicer is a mother of two children

From their marriage, the pair became a parent of two kids, a son named Morocco Tyson, and a daughter, Milan Tyson. They welcomed their first child Milan in 2008. Spicer gave birth to her second child in 2011.

Both Milan and Morocco are the youngest among the seven children of Tyson. Although their father is a very public man, he has made sure to hide them away from the media. That being said, they have made a handful of appearances in the media.

Take a look at the video where the brother and sister are playing a game!

Ever since Mike came into the world of boxing, he became renowned for not only his skill but for his personality as well. His nickname ‘the badass man on the planet’ or ‘Iron Mike Tyson’ tells a lot about him.

One thing that Mike is still famous for to this day is his terrifying demeanor. In the majority of his matches that he won, it has been said his piercing eyes really helped him a lot. He would strike such immense fear into this opponent’s heart that they literally became paralyzed from fear.

Regardless of his personality, Mike was always a very emotional person. You can only imagine how excruciating it was for Mike when his daughter passed away. In fact, in several interviews, he mentioned that he was really angry over the fact but didn’t have anywhere to vent it out.

Fortunately for him, his girlfriend was there to support him. In an interview with New York Post, Tyson said, “I’m just happy I got involved with her. It’s truly a life-saving experience.”

Lakiha Spicer Net Worth: She enjoys a luxurious life

Her husband Mike is one of the greatest boxers of all time. From his illustrious career, he earned over $300 million in prize money but he blew out all of his money due to his addictions.

At one point in time, Tyson even declared bankruptcy. However, everything changed when Kiki came into this life. Not only did he become sober, but he also started giving his life a second chance. As of now, Mike is a successful podcast host among a host of various other things. Moreover, his net worth is currently estimated to be $10 million.

Aside from that, the couple alongside their two kids live in Mike’s luxurious mansion in the Seven Hills gated golf-course community in the Henderson suburbs of Las Vegas, Nevada. Mike bought the house for $2.5 million.