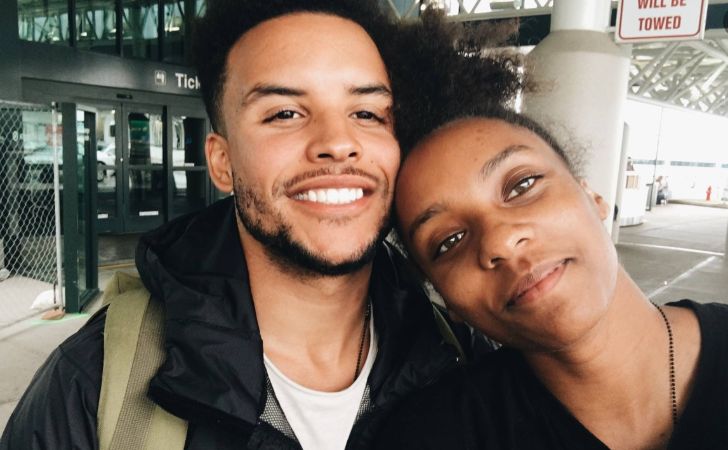 Tavior Mowry is an American actor and music producer, who is most famous as the younger brother of TV twins Tia and Tamera Mowry. Though he has currently shifted his career into movies & music, Tavior was into football in the past and also played for the University of California.

Apart from all his professional accomplishments, Tia & Tamera’s brother also leads a beautiful married life with his girlfriend-turned-wife. Well, who is his wife? Does he have any kids?

In this article, we are going to explore Tavior Mowry’s love life, career, net worth, social media presence, and much more.

Tavior Mowry Is The Younger Brother Of Tia And Tamera Mowry

As we said, Tavior is mostly recognized as the younger sibling of twin sisters Tia and Tamera. He was born Tavior Dontae Mowry on July 5, 1993, in Fort Irwin, California, USA, to father Timothy Mowry and mother Darlene Mowry. As of 2022, he is 29 years of age.

Born and brought up in the United States, he is an American in terms of nationality, but has mixed ethnicity, with Irish & English ancestry. Further, he has a decent childhood and lived a majority part of his life along with his parents and siblings.

Talking about his education, he did his schooling at a local school and later joined the University of California, Davis. He finished his graduation in 2015 with a bachelor’s degree in Sociology.

His Parents Are Former U.S. Army

In case you didn’t know, both Tavior parents were in the U.S. Army, where his mother served as the drill sergeant. However, they had to quit the job to move to California, where his father served as a custody officer with the City of Glendale Police Department.

Previously, his mother worked as a security guard for a brief period. However, things changed after the success of his sister Tia and Tamera in the TV industry. As of now, Darlene, Tavior’s mother, works as the manager for her daughter. Further, she has also produced a few movies like Double Wedding, The Poof Point, & Seventeen Again.

Tavior Mowry Career: He Has Worked In Varied Fields

When it comes to professional life, Tavior has worked in a variety of fields. At present, he identifies himself as a musical artist and works as a Freelance Audio Engineer at Rogue Wav Colectiv. Further, he has also worked as an actor in the 2021 crime-thriller Karen. He is also the part of TV series The Real.

Similarly, from Jun 2016 to Aug 2016, he worked as a Merchandiser at Wine Warehouse. Later, from Aug 2016 to Feb 2017, he worked as a Sales Representative at Regal Wine Company, before finally starting his journey as a musical artist and audio engineer.

Tavior Is Married To His Wife Zandy Mowry

Well, Tavior Mowry is married to his girlfriend-turned-wife Zandy Fitzgerald. The couple tied the knot on September 21, 2020, Monday at the Graystone Quarry, which is located slightly outside of Nashville.

Post their wedding, Tavior made a beautiful post from the day with a beautiful caption, where he wrote,

Likewise, the then-new wife Zanday also shared a photo of her kissing Tavior. In the caption, she wrote,

As of 2022, the couple are in a marital relationship for over 2 years and their relationship seems to be getting stronger every day. Just back in September 2021, Tavior shared a beautiful photo together with his wife, which pretty much reflected the kind of love they share with each other. In the caption of the photo, he described his fiancee-turned-wife Zandy as the most beautiful person. He wrote,

I love you so much my WONDERFULLY SWEET, KIND, GORGEOUS, WISE, AND JUST A LITTLE LESS FUNNIER THAN ME WIFE.

How Did Tavior Mowry Meet His Wife?

As per the reports, the couple reportedly met back in 2017, when they also shared ramen together. It was after that the duo got to know each other and began dating. Zandy revealed the story of their meeting via a post on her Instagram, where she wrote,

I always said ‘I want whoever I marry to love God more than He loves me’ because I knew if that was the case I would be loved well. That prayer and many others were answered when @taviordontaemowry walked into my life. Two and a half years ago we ate ramen together as strangers and now we’re PREPARING TO GET MARRIED. What a ride.

It was after a few years of dating, that the duo got engaged in July of 2020.

Does He Have Kids?

Though Tavior and his wife are together for years, they don’t have any kids. In fact, the couple does not seem to have any plans to welcome any kids.

Hopefully, we will soon get to see the couple with their newborn.

Well, Zandy Mowry, born Alexandria Breanne Fitzgerald, is a professional guitarist & songwriter. She was born on February 9, 1995, Nashville, Tennessee, U.S.A. As of 2022, she is 28 years of age.

How Much Is Tavior’s Net Worth?

Mowry is definitely a successful individual and has undoubtedly earned a decent sum of money. But when it comes to his exact net worth, things are unclear. However, there are estimations that he is worth around $500k to $1 million.

In fact, his wealth is expected to increase since he is eventually getting stable as a professional.

He Is Also Active On Social Media

Moreover, on all the social media platforms, he more often gives insight into his personal and professional life.