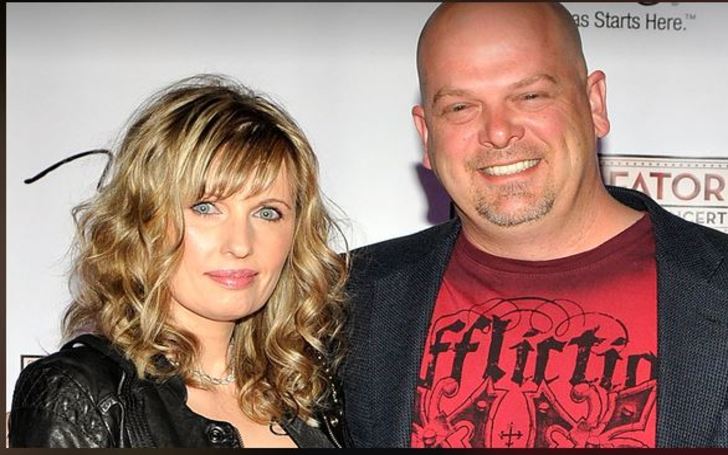 Tracy Harrison is the ex-wife of the Pawn Stars’ main man, Rick Harrison (Richard Kevin Harrison). She was Rick’s wife from the mid-’80s to the early 2010s.

Tracy’s former husband, Rick is a famed businessman, reality television personality, and owner of the Gold & Silver Pawn Shop which is featured on the History series Pawn Stars. His show, Pawn Stars was the highest-rated program on the History Channel, and the second-highest rated reality show behind Jersey Shore.

While Rick’s ex-wife, Tracy isn’t involved in his life as much in the present, she shared a significantly long time with him especially during his early rise to fame. And although there is not much to tell about her life prior to meeting Rick, she was an integral part of his life, nonetheless. Read the chapter where Tracy Harrison met one of the most famous History Channel stars.

The pair remained husband and wife from 1986 till 2011. Together, Harrison and her former husband had one child, a son named Jake, born, 2003. In addition to Jake, Rick has two more children: Corey, and Adam. The former is also one of the casts in his dad’s show, Pawn Stars. Jake made his debut on the series in March 2021.

Before Tracy, Rick was married to Kim Harrison from 1982 until 1985 with whom he had Corey and Adam. After Tracy, Rick tied the knot with Deanna Burditt. Though they didn’t have any children together. Of Rick’s three marital relationships, his union with Tracey lasted the longest.

Tracy Harrison Ex-Spouse Rick Was Broke When They First Met

In his book, License To Pawn, Tracy’s ex-husband Rick writes, it had been about eight or nine months since he broke up with his first wife, Kim.

Rick was in his early 20s living in Vegas with occasional dating but none of them turning into seriousness. The Lexington-born celebrity said he was just focused on raising his two little boys and was always busy but he was often struggling financially.

Rick admits jumping into another serious relationship was about the furthest thing from his mind.

“But fate has a way of messing with plans. Eight or nine months after Kim and I broke up, I met a nice girl from West Virginia named Tracy,”

writes, the father of three in his memoir. He reveals Kim and he met on a blind date. One of his friends was dating Tracy’s cousin, and the two of them decided Tracy and Rick should get together. For, Richard, he admits, this happened to take place during one of his least impressive stretches as a human being.

He reasoned he was struggling to raise two little boys, and was broke, too. He says he did not have a dime to my name. Rick was also driving a car that refused to go into reverse. However, as it happened, his car turned out to be the most reliable transportation for this first date.

Rick Says His Feelings Towards Tracy Harrison Was Something Else

Rick confesses he was clearly not much of a catch for Tracy, but he came into the date with his usual swagger. He nevertheless pursued her believing all in his ability to talk extensively. Something with Rick considers his gift.

Without money, the future History Channel star and his friend decided to take out Tracy and her cousin. When they reached at girls to pick them up, Rick writes he “instantly fell in love” with the blonde girl from WV as she stepped into the car.

What Tracy Did After Rick Told Her That He Had No Money?

They drove to the Stardust then to the parking lot and found a stall in the middle of nowhere. He didn’t ask the girls why he did so, and neither did they ask. After heading into the keno lounge, Rick told his date Tracy that he had zero money to spend on her that night.

To his future wife, the third child of the US veteran said the two of them were going to sit here in the lounge, order drinks, and act like they’re playing keno.

Rick reveals after hearing all these, Tracy was a good sport and played along. They then got a few hours of entertainment out of that—for nothing—and then headed back to the car.

While the first date was nowhere near as Richard would have wanted, his future wife still accepted his offer for a second meeting and a third. They dated for about six months before Tracy moved in with Rick. The North Carolina-born businessman adds Tracy jumped right in, helping with the boys and becoming Instant Mom. In his book, he writes she was wonderful from the start, and his sons accepted her into their lives as she’d always been there.

Tracy Harrison Was Really Close With Her Stepson, Especially, Corey

After eight more months, Tracy and Rick got married and it didn’t take long after that for Corey and Adam to start calling the former “Mom.”

Throughout their early life, Rick narrates Tracy also had a huge contribution in disciplining his sons. He says it was hard for her to be the one who had to get them to school, tell them to do their homework, and get on them when they pushed back.

In fact, his son, Corey, up until his marriage, was bringing his dirty laundry over to their house every Sunday for Tracy to wash. She, however, didn’t mind and would interrupt Rick from needling down his son.

Rick reports Tracy saying, “Don’t you dare. I want him to come over. I like doing it.” As per the Pawnography frontman, Tracy was close to her stepson, Corey. Tracy and he would have conversations — the kind of life issues guys just didn’t talk about with other guys.

Tracy even helped Corey find his wife, Charlene. Though he later divorced her married Korina Harrison.

Tracey Turned Out To Be Important For Rick’s Shop

Up until her son, Jake was born in 2003, Tracy worked in the store. As per Rick and her colleagues, she was a great employee. The mother of Rick’s son exudes calm. Reportedly she was also good at helping people pick out jewelry, and she was remarkably patient with the customers. Her ex-husband remembered the old ladies — loving her. Apparently, she was also popular among the Las Vegas transvestite community for how nice she was to them.

In fact, her popularity among the people helped Rick’s pawnshop grow its business. Because of his ex-wife, they used to buy jewelry. The transvestite bought the biggest, gaudiest jewelry Rick and Tracy had in the store. But when Tracy left, they took their business somewhere else, reveals Rick Harrison.

Where Is Tracey Harrison Now?

Rick never mentioned what led to the fallout of his marriage with Tracy nor did she reveal the real cause. What’s more, after her relationship ended with Rick, the West Virginian has hardly made an appearance on any podium.

How Rich Is Her Ex-Husband, Rick Harrison?

Tracy’s former partner, Rick’s business shown through popular reality series is all about showcasing incredible artifacts and often their purchase that involves surprising amounts of money. The now 56-year old and his team have walked through the shop’s doors with everything from pieces of Disney history to fully-functioning fighter jets — eager to sell their stuff and go home with more than healthy loads of cash.

Tracy’s ex-spouse, Rick Harrison is the current owner of the pawnshop. He has been pretty successful for the most part of the time he has been running the business. As per multiple reports and analytics, Rick has done incredibly well for himself in terms of greens.

One could rightly say, the lead man of Pawn Stars doesn’t appear to be hurting for money in the least. As such, his net worth is reported to be around $10 million.