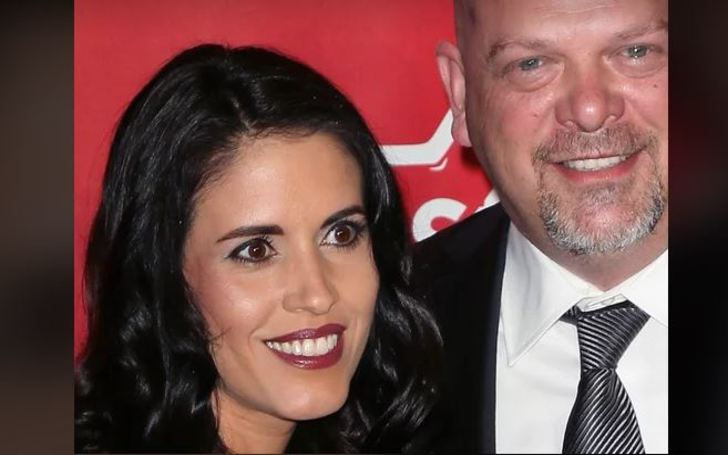 Deanna Burditt is the ex-wife of the Pawn Stars current lead man, Rick Harrison. The former couple was in a marital relationship from the early to late 2010s. Burditt, the brown-eyed former spouse of Rick received some attention from the time she was spotted by the side of the reality star.

For a while, Pawn Stars fans assumed Rick had finally found his happily ever after and so looked like the case for Deanna. However, their separation happened almost without anyone’s notice.

Pawn Stars has never discussed the life of Rick besides the artifacts business. So, know how come his another marriage couldn’t last either. Who really was Deanna Burditt? How did she meet Rick Harrison? What is she doing now?

Who Is Deanna Burditt?

Several reports have suggested that Deanna Burditt, professionally, is a lawyer or at least some sort of a legal secretary. As mentioned, she came to wider recognition after her relationship with Rick Harrison.

While it is unclear what year she was born, she is believed to be in her 40s. Speculatively though, she was born around the year 1976 as People reports that Burditt was 36 when she got engaged to Rick in 2012.

Deanna presumably is of Hispanic origin.

When Did She Marry Rick Harrison?

Deanna and Rick met in 2011 at the Aureole restaurant. The same year, they began dating and Rick proposed to her a year later, on February 14, 2012. The proposal took place at the same restaurant, where they had first met each other. The North Carolina citizen said he took Deanna to the very exact spot he had first laid eyes on her and told her, “girl, I’m marrying you.” He said it wasn’t even a question as he told,

After proposing to Burditt, he said to People, “I’m the happiest guy alive.” He said he was living the dream.

In contrast to people’s belief that Burditt’s engagement ring came from the famous Gold & Silver Pawnshop, Rick did not get the ring out of his stock room.

Rick and his former partner, Deanna married on July 21, 2013, in Ritz Carlton, Laguna Beach, California, in front of 180 people. All of Rick’s three children attended his wedding to Burditt. The bride walked down the aisle in a white Inbal Dror gown shipped in from London’s Morgan Davies Bridal.

Rick’s co-star Chumlee was the ring bearer and Counting Cars star Danny Koker was the minister. A band called Steel Panther played music at the event.

Deanna Burditt Didn’t Care About The Wedding Or The Honeymoon

In an interview where Rick revealed it was he who was in control of his wedding to Deanna. He quoted his wife saying to him, “OK, you organize it.” The frontman of the Pawn Stars said Deanna wanted a relatively small wedding. Rick, however, responded, “screw that—I want a big celebration to tell the world that I love you in front of all of our friends.”

However, when the Pawnography star really got his hand dirty he said he had no idea there was so much involved.

Also, when it came to post-nuptial travels, Rick said his third wife wasn’t that active in the decision-making. He said Deanna just wanted a simple camping trip in contrast to the Pawnshop owner wanting to take her to France or Fiji for their honeymoon. Burditt instead talked him into trading five-star luxury for back-country leisure.

In any case, Rick disclosed Deanna didn’t do any planning for them and he was in control, instead.

Did Deanna And Rick Have Any Children?

In an interview, The Golden Pawn Shop owner said he and his then-wife-to-be Deanna had decided that they were done having kids. He added that they had agreed on that whole thing.

Deanna, though, has three daughters from her two previous marriages. They were 16, 10, and 8 during Rick and Burditt’s engagement.

Her famous ex-husband, Rick, on the other hand, is a father to 3 sons, also from his previous two marriages both prior to Burditt.

Before Rick, Deanna was married twice. During one of her previous relationships, she used to go by the name Deanna Tomaino.

While not much about her first marriage is known, her second husband was to a man named Martines.

Some sources report that one of her ex-husbands had an unusual sex life and involvement that landed him in trouble with the law. He allegedly even had even gone to prison.

Harrison, as for himself, was previously married to Kim Harrison from 1982 to 1985. His second wife was Tracy Harrison whom he had married in 1986 but divorced in 2011.

Deanna Divorced Rick During The Pandemic 2020

Their marriage came to end almost 7 years after their wedding.

As per TMZ, Rick filed for divorce from his wife, Deanna, in Clark County, Nevada on July 1, 2020.

The separation didn’t receive much attention as it happened in the middle of the pandemic, and in the time when George Floyd protests were going down across the country.

The court documents reported Rick saying he and his ex-wife’s tastes, mental dispositions, views, likes, and dislikes had become so divergent that they had become incompatible in marriage. He also added that there was no hope for reconciliation as husband and wife.

Deanna at first responded to the divorce filing by asking for alimony, but as per the papers, the exes reached a settlement agreement in September 2020. They finalized all issues like alimony, support, and property division.
Although they didn’t have any children from their union, Rick said he got 3 great daughters out of it; referring to Deanna’s children from a previous relationship.

The Lexington-born reality star concluded the marriage “didn’t work out and [the divorce] was a mutual decision.”

Deanna Burditt And Rick After The Divorce

After the separation, Deanna, the former wife of Rick Harrison completely lost touch with the media. The business from Las Vegas while still the husband of Burditt, once revealed that she was not going to be appearing on the show and that she had no desire to be famous.

So her detachment from the foreground seems plausible. Moreover, the brunette is also quite imperceptible over social media.

On the other hand, things are going usual for Burditt’s ex, Rick Harrison; professionally. The History Channel’s celebrity continues to hunt/deal with vintage mementos with his show Pawn Stars currently in its 8th season.

However, it’s been a while since the Pawn Stars fans saw his personal affairs. In March 2021, he included his youngest son, Jake in the family business by introducing him in his reality series.