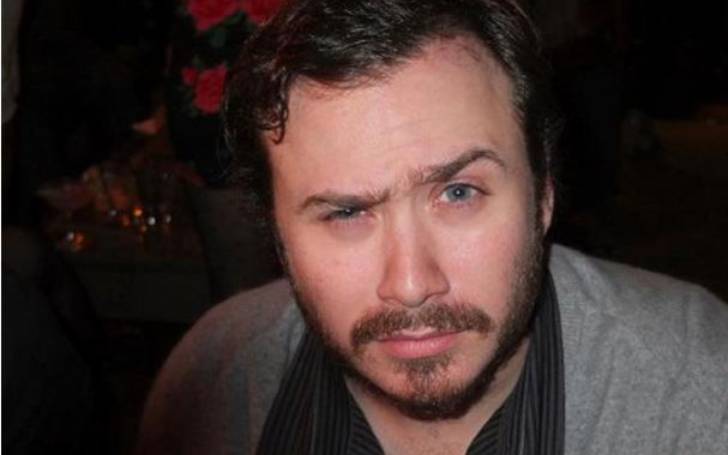 Trent Olsen, 38, is an American actor and media personality widely popular as the older brother of celebrated child actors Mary-Kate Olsen and Ashley Olsen. Also, his other sister is Elizabeth Olsen, none other than our one and only Wanda Maximoff.

Coming from a family of artistic backgrounds, Trent also made his way into the showbiz industry as a child actor, just like his sisters. However, the oldest Olsen star made a change of plans and started working behind the camera most of the time.

As childish as it may sound, Trent once tried to earn money by selling his sister’s autographed photos. So what is he up to these days? Is he married? Did he reach the heights of success like his sisters? Know all about Trent Olsen.

The oldest Olsen born, James Trent Olsen was born on 22nd May 1984 in Sherman Oaks, California, the USA. He turned 38 years old just recently and stands at a height of 5 ft 8 inches or 173cm.

Likewise, he is the oldest son of David ‘Dave’ Olsen and Jarnette ‘Jarnie’ Jones. Trent is an American as per his nationality and has Norwegian, English, German, Italian, and distant French ancestry.

Like any kid, Olsen has a great relationship with her parents, but unfortunately, they are no more together as they part ways in 1995.

The 38-year-old graduated from Campbell Hall School in North Hollywood in June 2002. He joined the University of Southern California in October 2004 and completed his bachelor’s degree in music.

While attending USC, he won the Mr. Tommy pageant which is similar to being a homecoming king in high school. Similarly, he reportedly went to the New York Film Academy.

His Three Sisters Are A-Listers Of Hollywood

While most of us may know Mary-Kate and Ashley from their role as Michelle Tanner in the long-running TV series Full House, Elizabeth became a household name after her role as Wanda Maximoff/ Scarlet Witch in MCU’s films.

Elizabeth’s most recent work in the 2021 miniseries the WandaVision earned her a Primetime Emmy Award and a Golden Globe Award nomination. Some of her notable works other than Marvel movies are Martha Marcy May Marlene, Silent House, Wind River, Sorry for Your Loss, and more.

Talking about Mary-Kate and Ashley, they are currently working on their fashion line called Elizabeth & James in Oslo, Norway.

Moreover, he has two half-siblings named Taylor and Jake from his father’s second marriage.

Trent Olsen Was Also A Child Actor- His Career In Brief

Back in 1989, Trent won a major role in HBO’s television series Tales from the Crypt at just 6-7. Sadly, his parents didn’t allow him to star in the film and the role went to someone else.

Later on, he went to appear in a few documentaries about his sisters, Mary-Kate and Ashley, The Olsen Twins Mother’s Day Special, Our First Video, Driven, and Biography to name a few. Moreover, he also guests starred as a boy with flowers in the TV series Full House.

Fast forwarding to 2009, Trent wrote a television film Model Behavior which stars Nate Brown, Josh Crotty, and Paul Greer. Similarly, he also has a script credit for Cookie Time to his name.

Furthermore, some of his acting credits are Old School, Comedy Corner, and Stalker. Apart from this, he has also worked as a writer and his upcoming projects are Rambler and Leaving Yellowstone.

Although Trent never grabbed the heights of success like his siblings, he sure has earned himself the name ‘social butterfly’ or the ‘prankster’ amidst his friends and family.

One of his friends from Campbell Hall revealed that James would sell his sisters’ autographed photos at school as a side hustle. The source added, “I definitely bought one. We all did!”

“He has like 3,000 Facebook friends, and Trent thought it was funny to change his birthday every three months or so, he’d receive 100 posts on Facebook wishing him a ‘Happy Birthday’ four times a year.”

Moreover, his friend also revealed that Olsen once raised $18,000 for research with a 10,000-mile cross-country road trip after one of his friend’s father passed away due to Lou Gehrig’s disease.

As of 2022, he is living a low-key lifestyle and many of his friends believe that James will rejoin the acting world soon.

He Is Also a Comic Writer

A part of his career behind the camera is his work as a comic writer. Trent Olsen grew up with a love for comics and as a child, he would collect and write comic books of his own.

Several years later, his passion turned into a profession and he was signed with Storm King Productions. The company is popular for its horror and sci-fi-themed comic books.

Trent reportedly traveled across the United States working as a writer and a photographer for the company. Moreover, his notable contributions in the comic world include Tales for a Halloween Night and Asylum, both by John Carpenter.

Is Trent Olsen Dating Or Married To Anyone?

Unlike his A-Lister sisters, James lives a very private life away from the limelight. He is not much spotted in the public and the media. As per various tabloids, Trent is reportedly single in 2022.

However, back in early 2021, he use to share pictures of a girl named Sue Ellen LaRocca calling her “my partner” and “my person”. Similarly, Sue has also shared pictures of Trent on her IG @sueboo87 a few times.

The pair even wished one another a happy anniversary on 16th March 2021 confirming that they started dating a year earlier in March 2020.

Surprisingly, in December 2021, Ellen posted a picture with another man named Daniel Cox with the caption ‘Merry Christmas! Santa dropped this one off for me’ along with a red heart hinting at their romance.

On the other hand, Trent has not updated his IG profile since October 2021. Similarly, no news of Trent and Sue’s breakup or marriage of anything has hit the internet since 2021.

What Is Trent Olsen’s Net Worth?

According to various sources, Olsen’s current net worth is estimated at around $500 thousand in mid-2022.

On the other hand, his younger sisters, Mary-Kate and Ashley have a combined net worth of $500 million and Elizabeth has an $11 million net worth as of 2022.