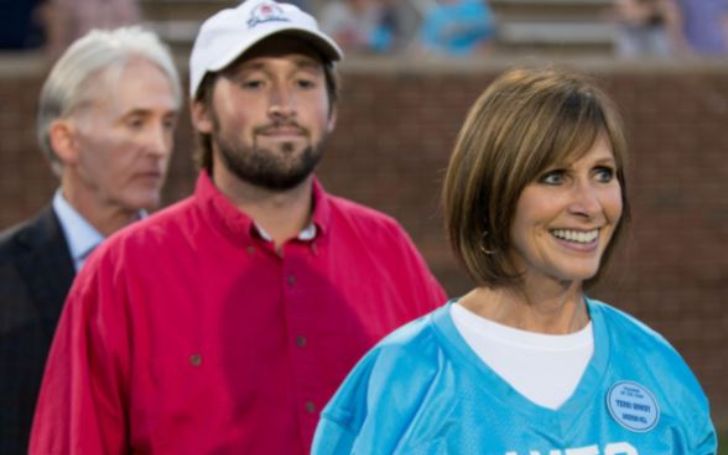 Terri Gowdy is a school teacher in South Carolina, Spartanburg who is better known as the wife of Trey Gowdy. Her husband is a television news personality, former politician, and former federal prosecutor who served as the U.S. representative for South Carolina’s 4th congressional district from 2011 to 2019.

Terri has been the wife of Trey Gowdy since the late ’80s with two children; both fully grown up with one of them having a partner of its own. Throughout his prosecuting career, Mr. Gowdy has directly or indirectly handled some of the nation’s most high-profile cases including the 2012 Benghazi Attack, pressing for the prosecution of Hillary Clinton during the 2016 presidential campaign, and a handful of death penalty cases.

Know how the wife of such a figure dealt with the aforesaid situations from the behind; how Terri become Mrs. Gowdy, her own life leading up to the first meeting with Trey, and significantly more.

Terri Gowdy Is The Daughter Of An Army Veteran; Was Also Into Pageantries

While the specific birth date of Terri is hard to define, she is presumed to have been born around the year, 1964. She is a native of Spartanburg, South Carolina.

As mentioned, she is the daughter of the late Frank Dillard, an army veteran, and his wife, Pat. Terri’s father, Frank was also a long-serving member of the First Baptist Church of Spartanburg and additionally had served as a Councilman for Spartanburg County.

The Republican’s wife, Terri used to be a beauty pageant contestant. In fact, she is the former winner of Miss Spartanburg and once was also the second runner-up in the Miss Carolina beauty pageant.

While her husband earned a Bachelor of Arts in history from Baylor University and received his Juris Doctor from the University of South Carolina School of Law, it is unclear where Terri, herself went for her college education.

Terri Gowdy Relationship With Her Husband Trey Gowdy; They Met At A Church

Terri met her future husband Trey at a church youth camp in their hometown of Spartanburg. They married on August 2, 1989, six years after having their first child, a boy named Watson.

Her politician attorney husband has often described her as the most Christ-like person he has ever known. Though ironically Terri says it’s her husband, the 57-year-old Trey who mostly surprises her with his knowledge of the Bible. Mrs. Gowdy states her spouse could quote the scriptures without referring to any verse.

They Have A Son And A Daughter

The 58-or-something-year-old Terri and her husband are parents to two children, Watson Gowdy, and Abigail Anderson Gowdy.

If not for Terri’s objection, her daughter’s first name would have been Judge, George, or Anderson. As such when the first-grade school teacher was about to give birth to Abigail, Trey was working on his first trial and the judge was the honorable George Ross Anderson Jr.

The daughter, Abigail studied at the University of South Carolina.

The Gowdy couple’s son Watson, on the other hand, is a Real Estate Agent/Salesperson at Brad Liles and Associates and also works at Keller Williams in Spartanburg. In 2015, Terri’s son, the now 38-year-old Watson stirred up quite the controversy after using a derogatory word referring to African American ethnicity in what would become a viral video.

Trey and his wife raised their two children in their hometown, Spartanburg. The former U.S. representative for South Carolina’s 4th congressional district didn’t want his children to go to a law school.

As for Mr. and Mrs. Gowdy, the now-empty nesters still live in Spartanburg.

Terri Gowdy And Her Family Had Received Death Threats

Given the man who has prosecuted the full set of criminal cases, including seven death penalty cases, Terri’s husband was bound to have few criticizers and in his case a handful of enemies. It was the year 2000 and Trey had just begun his political career as a young federal prosecutor.

He was a solicitor of the 7th Circuit, which spanned from Spartanburg to Cherokee counties. Terri and Trey’s children were 3 and 7 — and the former had never run for office before.

Not long after, Trey and his whole family started receiving death threats. It started one day when the ex-federal prosecutor’s wife was pushing their son on a swing in the backyard, and two police officers walked around their house. They’d apparently come to keep a protective eye on the Gowdy family after the patriarch started receiving threats.

The police often stayed in their home in addition to federal marshals camping out for a couple of weeks. There allegedly was a man who kept showing up at the local courthouse insisting he needed to talk to Mr. Gowdy. When the officials denied him, he would say he knew where Terri and Trey’s children went to school.

And he’d also visit there. The police later detained the man.

The Two Promises That Terri’s Husband Has Asked Her

In his 2020 book, Doesn’t Hurt To Ask, the former politician Trey has asked his wife, Terri Gowdy to do two things in the event if he dies before she does: wait until after his funeral to start dating and make sure their children remember their father loved being a prosecutor more than any other job.

Terri’s husband writes it’s the job he wants to be remembered for because to him it was the profession with the most meaning, the highest sense of purpose, and the most challenging objective.

In the book, Mr. Gowdy also describes the job as something where he got to persuade within the rules of fairness, due process, and to move the jury from not guilty to guilty using credibility, facts, reasoning, passion, logic, and an entire mosaic of words.

Other Facts About Terri Gowdy

Trey once told the Herald-Journal that his wife, Terri convinced him to decline an invitation from the White House to accept a nomination to the 4th U.S. Circuit Court of Appeals. She reportedly said he would end up feeling isolated and bored in the job. This was despite the rumors that Gowdy had been laying his eyes on a federal judgeship.