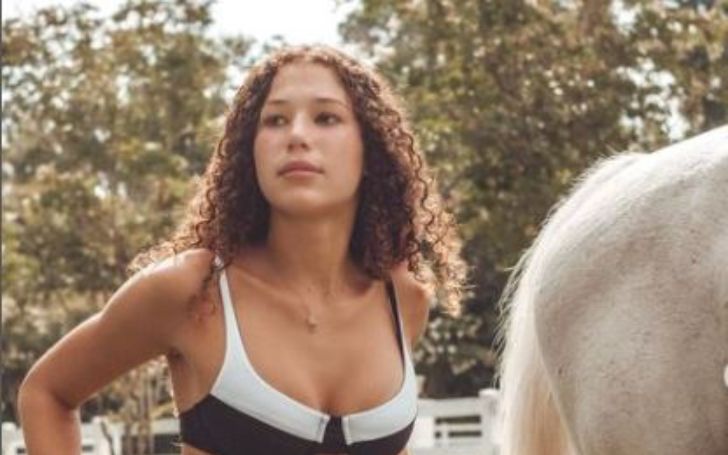 Sophia Strahan is the daughter of a former NFL defensive back for the New York Giants, Michael Strahan, and his ex-wife, Jean Muggli. Sophia is the youngest child of Strahan’s four children half of whom are from his other ex-partner.

Although the junior-most, Michael’s daughter, Sophia is all grown up with magnificent auburn hair. Her father says she is his crowning glory. Whether she visit their father’s onset or grace the red carpets with him, Sophia is always turning heads with her glorious hair. Add to that, she is also gradually establishing herself as a bikini beauty over the internet.

Read what her life looks like from the inside; being the daughter of a man whom America sees every morning, Sophia’s own career, her life besides the tag of a celebrity kid, and further.

Sophia Strahan Was Raised In A Farm Retreat

Sophia Trahan was born in December 2004. She grew up splitting her time between New York, North Dakota, and North Carolina.

Sophia would spend most of her early childhood with their mother in a farm retreat in Wilmington North Carolina. Jean had bought the property shortly after the birth of her twin daughters. Strahan grew up at her mother’s no less than a paradise Sycamore Bend Plantation.

It features a beach volleyball court, a clay tennis court, and a riding ring, all with LED lighting and a sound system as well as a half basketball court complete with pink out-of-bounds lines. The central attraction, however, is the renovated five-stall barn.

While Sophia’s maternal family is North Dakotan and are whites, from her father’s side, her ethnicity includes African-American, as well as a small amount of English ancestry.

Sophia’s parents, the six-foot-five-inches tall, Michael Strahan and Jean Muggli met in 1994 at a spa in Manhattan when the former was still a star NFL defensive end for the New York Giants.

Strahan’s mother, Muggli then was working at the same skincare shop. Her folks married in July 1999 in North Dakota but would split officially in mid-2006. Sophia was then just 20-month-old.

Sophia Strahan Has A Twin Sister

When together, Jean and Michael had two daughters including Sophia, fraternal twins. Soph’s womb mate, Isabella is two minutes older than her.

Her sister, Isabella Strahan is quite athletic like her father, a volleyball player, and an equestrian.

She Also Has Two Half-Siblings

In addition to her twin sister, Isabella, the five-foot-nine-inches tall, Sophia also has two half-siblings, Tanita and  Michael Anthony Jr. They were born from her father’s former marriage to Wanda Hutchins.

Tania is Strahan’s oldest child.  She graduated from the Fashion Institute of Design & Merchandising. Tanita Strahan, who was born in Germany, currently resides in Los Angeles and is a visual artist. Her line of work includes acrylic, watercolor, gouache, ink, graphic designing, and photography.

As for Sophia’s half-brother, Michael Anthony Jr, he is a graduate of the University of Texas at San Antonio with a degree in psychology.

Michael Strahan says both Michael Jr. and Tanita are close with Sophia and Isabella, even though they grew up mostly in different households.

“You worry how the kids will mix and blend, but brothers & sisters are brothers and sisters regardless of different mothers,” said the Superbowl XLII winner with People in Sep 2016.

Sophia Strahan Is A Rising Equestrian

A strong enthusiast of horse riding from her childhood, Sophia is also an equestrian similar to her look-alike sister, Isabella.

Her mother once stated she approximately spent about $450k for Sophia and Isabella’s horse riding lessons. In fact, the twins have been participating in various riding competitions from a young age. One such is the Adult Amateur Individual Championship at the Tryon International Equestrian Center held in June 2019.

Back then, Sophia won the silver medal and the reserve championship – riding the horse named Zeus with an overall score of 415.

“I tried this really tight turn, and that was kind of making me nervous, but it worked out, and then at the last jump. I pretended that there were 10 jumps left since I always mess up the last jump. But it actually turned out – it was good,”

said the now 17-tear-old describing her then performance.

Over the years, Sophia has transformed from a barrel racer and pole bender to a successful hunter and equitation rider. She has taken home blue ribbons from some of the most prestigious horse shows on the East Coast.

When she was nine, Sophia along with her sister, Isabella also won a sheep-riding contest in North Dakota. When they were in their mid-teens, the sisters were under the guidance of trainer Lynley Reilly.

Sophia, who has also been living in Los Angeles in recent years, often loves posting snapshots of her horse, Zeus, on her social media handles as well.

She Once Interviewed Michelle Obama At The White House

Besides being a celebrity kid and often hanging out on her father’s show, Sophia also has sat down to talk with one of the most laudable persons on the planet.

In July 2015 Michael and Jean’s youngest daughter along with her twin sister, Isabella interviewed the then First Lady Michelle Obama at White House Kids ‘State Dinner.’

At a glamorous gala, the womb mates, who were at the time in grade school and 10, thanked the first lady for the invitation to the dinner. They also subsequently asked her about the origins of the event.

Ms. Obama then explained the true purpose of the program after which Sophia and Isabella simultaneously asked a series of questions regarding a healthy diet for the kids among other things.

Does Sophia Strahan Have A Boyfriend?

Michael Strahan’s twin daughters are in one of their most radiant periods of life. And it’s quite reasonable to wonder if the emerging bikini models have a romantic partner.

Sophia and Isabella, who are also followed by actress Jessica Alba on Instagram, have been grabbing thousands of attention with all those sizzling snaps of their body in swimsuits.

Both the sisters, however, are yet to share what the very personal facet of their life looks like. Accordingly, it remains to be seen if the twins have boyfriends or are all single.

How Rich Is Her Father, Michael Strahan?

Sophia Strahan’s father, Michael Strahan has a very hefty amount of net worth amounting to $85 million. And this fortune surely sees to the fact she lives an opulent lifestyle.

Michael’s $17 million LA house, $16 million Brentwood mansion, and a $2.25 million NYC Loft tell a lot about the extent of financial securities Sophia and her siblings have.

Million-dollar family wealth and several extravagant properties surely facilitate Sophia to worry less about the money problems. Though what also adds to the luxury is she has already started getting modeling gigs and promotion deals thanks to a fair amount of popularity on Instagram and other social media platforms.