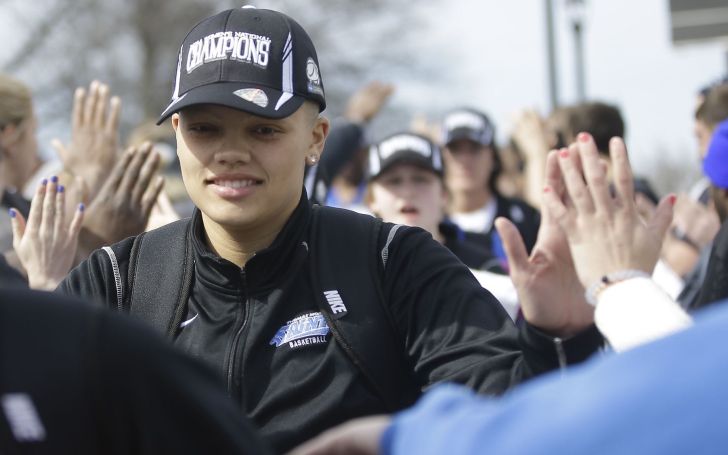 Sydney Moss is an American basketball player and a coach. She initially gained fame as the daughter of Randy Moss, a veteran NFL star. She is one of Randy’s daughters with a former girlfriend, Libby Offutt.

Even though she is still recognized as Randy’s daughter, Sydney has also carved a name for herself. Similar to her dad, she also chose to be an athlete and joined Basketball.

But you know all that. What you are really here for is to know more about Sydney’s life. What is she doing these days? Does she have a boyfriend? Her relationship with mom and dad. Let’s find out everything!

She was born on March 6th, 1994, in West Virginia. Her mother Libby gave birth to her while studying high school at the age of 18. Her parents Libby and Randy had begun dating during high school.

Though at first Sydney’s mom was kinda upset and worried about becoming a mother at such a young age. But as time went by the young mother realized how her life turned out positive since Sydney was born. She was her lucky charm.

Libby, in an emotional post shared on Facebook on the occasion of Sydney’s birthday, talked about being a dumb kid who happened to have a mixed baby. However, she also added,

“All I knew was that I wanted someone to love me forever and never leave me. I realize now, all these years later, God answered my pray(s)!!! Through all of the ups and downs and goods and bads, Sydney is literally the ONLY one that has NEVER left me and continues to LOVE me unconditionally, and definitely when I don’t feel I deserve it!”

After Sydney’s mom and dad broke up, she spent the majority of the time with her mother.

Sydney has four younger siblings: Half-Siblings from her Father’s marriage

Randy Moss and his ex-girlfriend Libby, in total, welcomed five kids including Sydney. Their second-born Thaddeus Moss was born on May 14th, 1998. He is a football player and plays in the NFL for the Washington Football team.

Her youngest brother Montigo ‘Tigo’ Moss born on June 28th, 2002, is a football player as well just like his dad and brother. He currently plays college football at the University of Maine. Sydney has two sisters Senali, born on March 24th, 2004, and Sylee Moss.

Aside from her biological siblings, Sydney reportedly has six half-siblings from her dad’s marriage with Lydia. The name of her half-brothers and sisters are Lexi Adkins, Lyric, little Lourdes, Randy, Teran, and Arianna.

When her parents separated, Sydney primarily started living with her mom in West Virginia. This led to complications in her relationship with her dad Randy. It’s a fact that no matter how much you try to co-parent your child, one cannot save each and every essence of a great relationship.

Sydney first talked about her relationship with her dad in an interview with the NY Times in 2015. She stated, “I feel like we’re the same person, so we don’t really get along. I think we’re both – hardheaded, I guess that’s the right word.”

Apart from this, Sydney never wanted or wants to live under her famous father’s shadow. Maybe this is why she works twice as hard as any normal sportsperson. In the same interview, she talked about getting out of her parent’s shadow and carve a name for herself.

And she did indeed win championships. Moss is a former WBCA Player of the Year and a three times three-time first-team All-American.

As of this moment, Sydney and Randy Moss have a great father-daughter bond. In April of 2019, both of them went fishing together.

@sydneym40 I got mossed!5-3 she got me on my own boat!Great time being out with love 1s!rd 2 Tom gotta get minez

Safe to say they are happy and their relationship is back on track.

After years of hard work and trying to be recognized by her own name as opposed to her father’s, Sydney finally made it. In August 2020, Sydney was announced the Assistant Women’s Basketball Coach at Thomas More University. For those of you who don’t know, it is the same university from where she graduated in 2016. She studied high school at Boone County High School.

Prior to becoming the coach at Thomas More, she also worked as an Assitant coach at St. Thomas University women’s basketball team during the 2019-20 season.

At present, Sydney is the director of a non-profit organization called Moss Elite Youth Basketball. She formed the organization along with her brother in March 2021. It aims to help the local youth in their basketball game.

Besides, she is now also a store manager at GNC.

Is Sydney in a relationship?

No, she is single as of 2022. Scrolling through her Facebook and Twitter handle, we found no evidence of a secret boyfriend or a girlfriend for that matter.

She relishes her singlehood and spends most of her time coaching basketball to young prodigies. When she’s home, she is greeted by her two pet dogs, Zeus and Zoro.

Mom sent me my daily pic of the boys 🥰 pic.twitter.com/zHLeFWjLxe

How much is Sydney Moss’ net worth?

It’s a no-brainer that being a daughter of a legendary sportsperson has a lot of perks. One of them being an affluent lifestyle. Speaking of which, her father Randy has a net worth of $20 million.

On the other hand, Sydney, being an assistant coach at a college-level basketball team means she earns some big bucks. Her annual earnings average about $40,000.