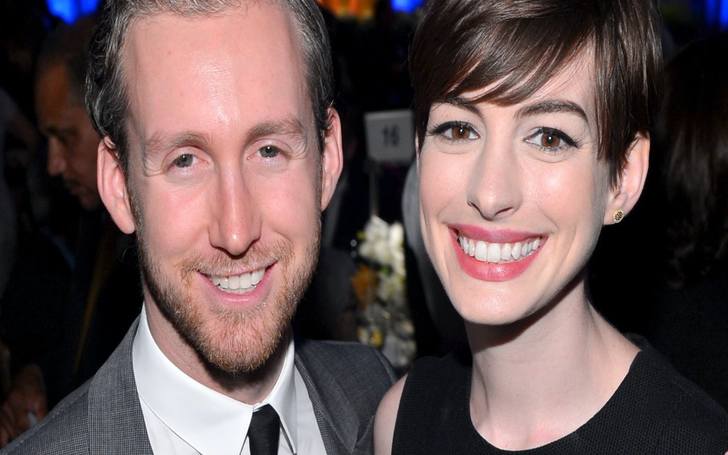 Adam Shulman is an actor and producer, known for playing Paul O’Bannon NBC’s drama series, American Dreams.  He has also had credits in shows and films like The West Wing, The Dukes Of Hazzard: The Beginning, The Gold Lunch, and Ricki And The Flash.

Schulman is also better known as the husband of the Academy-winning actress, Anne Hathaway. He has been married to Hathaway for more than eight years with two children in between. Hathaway has been a household name in Hollywood for decades. But she is also famous for keeping her personal life to herself —including her nine-year marriage to Adam Shulman.

The couple nevertheless remains strong, committed, and largely out of the spotlight. So who is Hathaway’s longtime partner, Adam Shulman? From Shulman’s career to his history with Hathaway, here is everything that is to know about the man who went on to become Mr. Hathaway.

He also studied at the New York University (Tisch School) for the summer program where he learned “Sight and Sound”.

Adam Shulman Is A Jewelry Designer; He Designed His Wife Engagement Ring

Adam is also a jewelry designer. He designed his wife’s emerald-shaped diamond engagement ring. The New Yorker in addition to being a jewelry designer owns a jewelry brand called James Banks Design. As per the brand’s website, the pieces are handmade from recycled material in Southern California.

Schulman is proficient in a range of designs including butterfly pendants, hanging light bulbs, constellation-inspired baubles, feather details, and more.

The theater major student named his shop after his grandfather, who also used to design jewelry for his own wife —with business partner Heidi Fink. Shulman and Fink met on the set of Hathaway’s 2010 film Alice in Wonderland. In the movie, Fink worked on props and jewelry. The jewelry duo took inspiration from Hathaway for their first piece, “Lightkeeper.”

Adam Shulman And Anne Hathaway Got Engaged In 2011

Schulman asked the Princess Diaries actress to marry him on Nov 28, 2011. As a designer, he, himself architected the engagement ring. It was a 6-carat diamond ring that he helped design with Kwiat jewelers.

Hathaway surprised fans when she married Shulman, then her boyfriend of four years, in a private Big Sur, California, ceremony in September 2012. The Oscar actress was then 29.

Their Wedding Took Place In California

Jewelry designer/producer/actor, Schulman, and actress, Hathaway had a very California wedding weekend. People reported more than 150 guests attended the nuptials. The celebrations commenced on Friday, with a rehearsal dinner at the Ventana Inn and Spa.

The wedding took place in a nearby estate. The couple kept the decor classy and rustic, with a natural theme. Anne’s friend, Valentino Garavani designed the bride’s dress.

After marrying Anne, he became the son-in-law of Kate McCauley Hathaway and Gerald T. Hathaway.

Shulman met his future wife, actress Anne Hathaway at the Palm Springs Film Festival in 2008. In Feb 2013, to Harper’s Bazaar UK, The Dark Night Rises star revealed that she had told a mutual friend of theirs at the time,

“I’m going to marry that man. I think he thought I was a little nut, which I am a bit, but I’m also nice.”

Before dating Schulman, Anne was dating Raffaello Follieri who police arrested for fraud. So when asked if she faced any trust issues during their initial relationship, Hathaway said she was just very honest with him. She admitted she knew from the second she met him that he was the love of her life.

The Les Miserables actress added while she knew she couldn’t have met him at a worse time, she decided to go for it and claimed Schulman has never hurt her. Adam’s wife said with their relationship — it kept on getting better and better for her. She admitted the love for her husband made her more trusting of everyone. Hathaway also claimed she actually started to see who she had become during those ugly years of hers.

Hathaway Said Shulman Changed Her For The Better.

Anne Hathaway credits her husband, Schulman for many changes in her life, including her worldview. She said her spouse changed her ability to be in the world comfortably. Before him, she admitted to caring too much about other people’s opinions of her.

“I’m a different human than I was then,”

Adam Shulman Is A “Spectacular” Dad, Says His Wife, Hathaway

While talking with Entertainment Tonight, Hathaway said her Brown University graduate husband is a spectacular father to their children as expected.

They Have Also Been Professional Partner

In 2014, Shulman collaborated with his wife, Hathaway to produce Song One, an indie drama film starring the actress, herself.

Anne later revealed how she felt working with her husband. The actress explained she was curious how it would go with the prior knowledge, “don’t work with your spouse.” But as the film progressed, she said she loved working with her partner. She said her husband was really good at being a producer and added that she learned a lot from him in the process.

Some believe Hathaway’s husband could be a reincarnated William Shakespeare. This is because the famed English poet’s wife’s name was Anne Hathaway and moreover, the designer also kind of looks like the Bard. As intriguing as it might sound, Schulman, however, has no connection to Romeo and Juliet’s writer.

Adam Schulman’s net worth is yet to have attested figures or even an approximation. He, however, is assumed to be quite wealthy albeit not as rich as hir Hollywood wife, Anne Hathaway who has quite an eye-opening net worth of over $80million. Nonetheless, assuming that he works with some precious elements, Adam is speculated to have a fortune of at least over $1million. Not to mention, the items in his e-shop do not come any cheaper. Most of the bijoux have price tags ranging from as low as thousands of dollars to even hundreds of thousands.

He Also Does Charity

The father of Hathaway’s children, Adam also believes in giving back to society and helping the less privileged around the world. He and Anne cashed out their wedding photo and donated the money to the same-sex advocacy group Freedom to Marry.

Together, the couple also hosted the group’s National Engagement Party and helped raise half a million dollars during the event.

In 2013, Adam with his jewelry skills created a unique pendant for the World of Children Award. The foundation collects funds to meet children’s necessities and interests all around the world. When talking to People about the pendant design and his appreciation for World of Children, Schulman said he and his team wanted the design to represent children when people wore it.

Unlike rumor that says Anne Hathaway follows The Church of Jesus Christ of Latter-day Saints or LDS, she grew up Roman Catholic. But at age fifteen, her relationship with the Catholic Church changed after learning that her older brother, Michael, was gay.
Tags: Celebrity Spouse