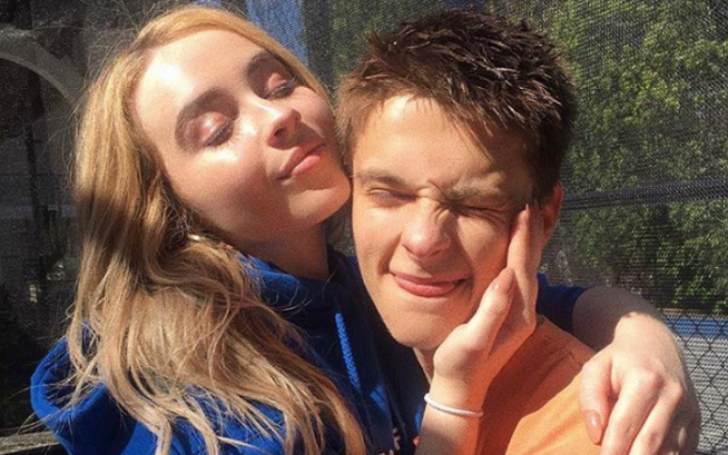 Corey Fogelmanis is a versatile and promising American actor who came into the limelight after his role in Disney’s TV show, Girl Meets World.

While Fogelmanis’ professional life is a smooth ride, his romantic life seems to be a little complicated. On the one hand, there is curiosity about Corey Fogelmanis’ girlfriend, while on the other hand, there are questions regarding his sexuality.

Contrary to the rumors of him being gay, there are also claims that Corey is dating fellow Girl Meets World actress Sabrina Carpenter.

Corey is not dating singer and actress, Sabrina officially. However, their romantic social media posts and frequent public appearances sparked the rumor that the two are dating.

Despite all that, they are nothing more than just close friends in real life.

Clearing up all the speculations about their alleged romantic life, Sabrina told Seventeen,

“Corey [Fogelmanis] has been a big supporter in my life. He’s so funny and smart. And he’s a great friend—but never [more than that]”

“Oh, my God—I don’t know how many times I’ve had to say that! The thing is, when you have a best friend like that and you’re so comfortable with them, you’ll hug them, you’ll jump on their back, you’ll have sleepovers. But we’re really just friends…”

Sabrina is definitely not kidding about them being buddies as they are incredibly close and super supportive of each other. Moreover, the actor is also a friend of Sabrina’s sister Sarah Carpenter.

Corey and Sabrina Appeared Together in ‘Girl Meets World’

They featured in a hit comedy TV series, Girl Meets World together, probably the roles Corey and Sabrina are best known for. The two joined the project back in 2014 and appeared until 2017.

Who is Corey Fogelmanis Girlfriend in 2020?

The 21-year-old actor is not dating anyone as of 2021. There is a possibility that Corey has a secret girlfriend as the actor loves keeping his personal life out of the media radar.

Besides, Fogelmanis is an active social media user, however, most of his social media posts are related to his professional life. This makes it quite difficult to find out about his dating life.

With no confirmation on his dating life, we can say Corey is focused on his growing career at present.

Previously, Corey was rumored to be in a relationship with Rowan Blanchard. But it turned out to be a hoax as they are just pals in real life.

What About Sabrina Carpenter? Is She Dating Anyone?

In early 2020, Carpenter was dating her boyfriend, Griffin Gluck. But, she is not together with Gluck anymore. Gluck is an actor better known for his role in Big Time Adolescence.

After less than a year of dating, Sabrina and Griffin Gluck broke up in August 2020. A number of online tabloids covered the news of their breakup, however, none of them cited the cause of their separation. On the other hand, the ex-lovebirds haven’t spoken about their split in public as of yet.

According to Bustle, the actors met on the set of the 2019 Netflix movie, Tall Girl. The pair hit it off soon and started dating in October. In December 2019, they were spotted enjoying a Lunch date at Studio City, California.

No idea how it all sparked, but some tabloids started speculating about Fogelmanis’ sexuality. Probably his tendency to keep his romantic life to himself is the reason behind his gay rumors. However, Fogelmanis hasn’t ever addressed those rumors.

Although even after a series of likely photos of the duo on their respective social media handles, they initially did their best to keep their love secret. But, it couldn’t be more. Judging by their recent social media posts, it all gestures something interesting between the two. Although both of them still remain quite confidential, there is no doubt that the two are pretty much into each other.

Who is Taylor Lautner Dating in 2020? Has Had Many Girlfriends