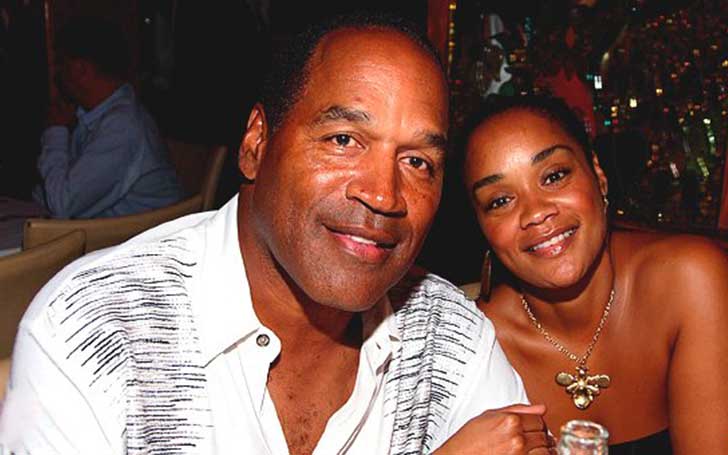 Arnelle Simpson is the daughter of the former NFL star, television personality, and convicted felon, O.J. Simpson. Simpson made her way to the spotlight after her father got involved in a lengthy court trial over the murder charges of his second wife, Nicole Brown, and her friend.

Arnelle always stood by her father throughout his trials due to which the star kid made frequent appearances on television and other media. Later, Simpson was portrayed in a number of documentaries that showed her father’s highly covered legal battle.

Besides, Arnelle, during the ’90s, became one of the most renowned star kids. But after her father’s acquittal, Simpson has relatively remained low-key. But many of her fans as well as well-wishers of O.J. Simpson want to know about Arnelle. So, where is Arnelle Simpson now? What is O.J. Simpson’s daughter doing at present? We have all the details here.

Who is Arnelle Simpson’s Mother? Is the First Child of O.J. Simpson With His Wife

Arnelle Simpson was born as the first child to her father, O.J. Simpson, and mother, Marguerite L. Whitley. She was born on December 4, 1968, in the United States of America. She is 54 years old as of 2023.

Her parents were high school sweethearts who married at a young age. O.J. Simpson was 19 while Marguerite was 18 when they tied the knot in 1967.

Arnelle had two siblings, a brother Jason Lamar Simpson who was born in 1970, and a sister Aaren Simpson, born in 1977.

Her brother, Jason never came to the spotlight during his father’s trial in the ’90s, however, he came under scrutiny in 2012, after author William Dear accused him of the murder in his book titled “O.J. Is Innocent And I Can Prove It.”

In the book, Dear put forward the outcomes of his 18-year-long investigation of the case. He also put the evidence and the list of the suspect in the book and showed how O.J. Simpson was innocent.

Arnelle’s younger sister, Aaren Simpson died at the age of one in 1979 after drowning in a family pool. Their mother, Whitley found Aaren unconscious in the pool. She was soon taken to the UCLA Medical Center. Paramedics responding to an emergency call to Los Angeles Fire Department said the child had no vital signs when they arrived at her home.

Aaren battled for eight long days before she succumbed to respiratory failure on 26th August 1979. Following her death, the grief-stricken father thanked all of his fans and well-wishers from across the United States for their prayers, cards, and phone calls. Her burial is located in Culver City, Los Angeles County, California.

Arnelle’s father, O.J. Simpson married Nicole Brown after he divorced her mother Marguerite Whitley. As a matter of fact, O.J. had already started dating Nicole while he was still married to Whitley which later became one of the reasons for his divorce.

Arnelle has two half-siblings, Sydney Brooke Simpson, and Justin Ryan Simpson from her father’s relationship with her stepmother Nicole. Sydney is 37 years old while Justin is 34. Both siblings are active in the real estate business.

Sydney runs her own company named Simspy LLC in St. Petersburg, Florida that manages her properties in the area. Similarly, her brother Justin is also a successful real estate agent who has been listed with Coldwell Banker Homes out of St. Petersburg, Fla.

Soon after the murder of Arnelle’s stepmother, Nicole Brown, her father, O.J. was arrested and Arnelle took responsibility of Nicole and O.J.’s two children. Her half-siblings Sydney and Justin were both kids at the time and Arnelle made sure to provide them a “normal life.” However, Arnelle says it wasn’t as easy as it seems now.

It was tough to deal with the family condition as well as the media attention they were getting at the time. But, Arnelle and her half-siblings were somehow able to get through the situation.

Arnelle Simpson’s mother, Marguerite L. Whitley divorced her father in 1979 after more than a decade of married life. Arnelle Simpson took care of all three children they had at the time following their divorce.

Following the divorce, Simpson married Nicole Brown while Whitley tied the knot with a transit supervisor, Rudolph Lewis in 1986. She divorced her second husband in 1991 due to some irreconcilable differences.

After just around a year since her second divorce, Whitley again got married. This time, she exchanged the vows with a furniture sales representative Anthony Thomas. She is not known to have divorced for the third time.

Arnelle Simpson Has Been Portrayed in an Anthology Series

What Does Arnelle Simpson Do For a Living?

Talking about her profession, Arnelle once worked for a rapper named Hash. Later on, the star kid also served as a producer for a few fashion shows.

But, following her father’s second arrest, O.J. Simpson’s daughter Arnelle started working as a caretaker for his estate.

Arnelle Testified for Her Father’s Parole in 2017

In 2007, O.J. Simpson was arrested in Las Vegas, Nevada for armed robbery and kidnapping. He was convicted of the crime in 2008 and was sentenced to 33 years in prison with a minimum of nine years without parole. Simpson served his time at the Lovelock Correctional Center in Nevada.

After he was eligible for parole, his daughter, Arnelle Simpson testified for his release in 2017. Arnelle said she and her siblings along with the family wanted O.J. Simpson to come home. Here is a clip of her testimony.

“On behalf of my family …we want him to come home. And I know in my heart that he’s very humbled,” says Simpson’s daughter, Arnelle Simpson pic.twitter.com/DZwL1S6O6j

Accused of Blowing Her Father’s Pension

Prior to her father’s release, Arnelle was the one who took care of all the finances of O.J. In fact, she was one who was assigned to receive the NFL pension which she used to pay for his Florida mansion.

However, following the release, O.J. accused his daughter Arnelle of blowing all the money, also mentioning that he was on the verge of losing his Florida mansion because she had not paid the mortgage, as per Yahoo News.

Was Arnelle Simpson Ever Linked To Tupac?

Even though Arnelle Simpson’s love life has always remained under the media radar, there is some evidence of her romance. In the ’90s, she became part of the limelight after her father was involved in a greatly covered court trial. After that, she increased her link with some celebrities.

Where is Arnelle Simpson Now?

Arnelle Simpson has lived away from the media since her father was acquitted of the murder charges of his second wife and her friend. She has only come to the media while supporting her father.

In 2017, she came forward and spoke in favor of her father’s parole which was granted in July of that year. Due to this reason, Arnelle Simpson’s lifestyle is not well-known in the media lately.

As per some online sources, Arnelle Simpson lives in Fresno, a city in California. The outlets also reported Arnelle’s mother lives in the same area.

She Motivated Her Father to Write If I Did It

O.J.’s book If I Did It was more of her daughter Arnelle’s decision who motivated him to write. However, the original idea to write the book came from one of Arnelle’s friends Raffles Van Exel.

The book was published in 2007 with a new title If I Did It: Confessions of the Killer, and became an instant hit.

As per the date of the Los Angeles Times, the book sold 100,000 copies within months, receiving the tag of a bestseller.

Is Arnelle Married to a Husband?

Since her father’s frequent court trials, Arnelle along with her brother and her half-siblings have remained quite secretive about their life. They are neither active on any kind of social media handles nor prefer to make any public appearances. So, it is too hard to trace whether or not O.J. Simpson’s daughter Arnelle is married to a husband or not.

But, judging by her age, Arnelle is possibly leading a happy marital life with her hubby but not for sure.

What is Arnelle Simpson’s Net Worth?

Since the details about her career are still few, the exact amount of her net worth is yet to be revealed. But, as per some sources, her fortune is estimated to be $5000,000 in 2023.

She currently resides in Fresno, a city in California.