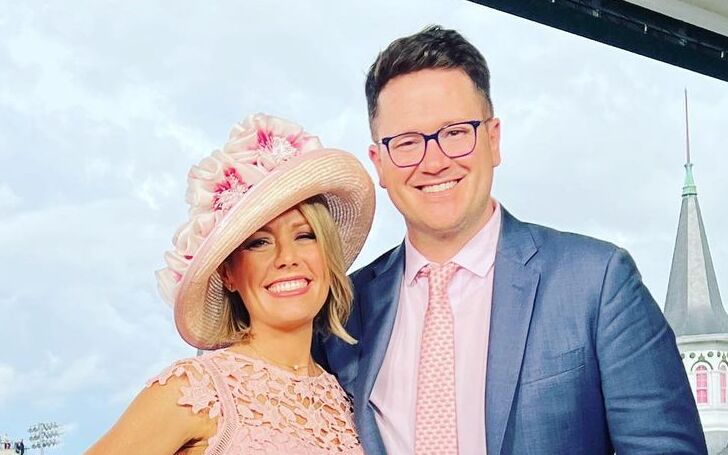 Brian Fichera is an American writer, producer, and cameraman. He is rather famous as the husband of famous NBC meteorologist Dylan Dreyer. Brian and Dylan have been leading happily married since 2012 and the couple is proud parents of third children as well.

Fichera came to the limelight after getting married to Dreyer and as of now, he is also a famous social media personality. He has more than 120k followers on Instagram where he frequently shares his days at work as well as his happy times with his wife and children. But do you know how he got into this profession? What was his childhood like?

Here’s everything you should know about him.

Who are Brian Fichera Parents? His Birthday and Early Life

Talking about his parents, Russ and Denise completed 50 years as husband and wife in April 2022. Brian’s wife, Dylan had shared a couple of photos on her Facebook congratulating them on their milestone.

Meanwhile, information about his education is not prevalent in the media.

Brian is the youngest of three children of his parents. He has one older brother Scott Fichera, and one older sister, Nicole Fichera Redding. Even though Brian is very close to both his siblings, he doesn’t talk much about them in the media.

He has, however, shared a number of posts on social media featuring his brother and sister. Brian has also shared photos from their childhood days showing three of them with their parents.

Fichera is a Cameraman at NBC

In his Facebook bio, Fichera has introduced himself as a camera operator. Despite being married to one of the most well-known meteorologists, and having worked in the media field for years, Brian has refrained from sharing his professional details.

Due to this, there aren’t many details about Brian Fichera’s career. Before joining the parent company NBC, Brian worked for WHDH, NBC’s Boston affiliate where he met his future wife Dylan Dreyer.

The young and enthusiastic cameraman, Fichera is happily married to his wife of nearly one decade, Dylan. The now husband-and-wife tied the knot on October 6, 2012. They will complete 10 years as a married couple this October and it still seems like they have just met.

Brian and Dylan first came across in the late 2000s, in around 2008 when the former joined WHDH, NBC’s Boston affiliate. Dylan had already been working there as a meteorologist. They initially didn’t get a lot of time to spend together at their office as Brian used to work a day or two a week. They didn’t know each other well for some time. As a matter of fact, Dylan even thought that Brian’s name was Tom.

The duo started hanging out together after Brian started working more at the network. The pair and their colleague, Todd even started hanging out outside of work which solidified their bond. A couple of years after, they organized a small party at Brian’s house which they termed the “Jammy Jam.” Dreyer says it was the day when she realized she was head over heels for Brian.

Brian and Dylan started dating around 2010 and after around a year of dating, the lovebirds got engaged in July 2011. Brian popped the question to his then-girlfriend on the front porch of his parents’ house in Easton, Massachusetts. Meanwhile, the meteorologist told that she kind of knew that her beau was going to propose to her after seeing “roses and two glasses of champagne.” She also revealed that her family and friends were waiting for the couple to celebrate their engagement in the backyard.

Four years after tying the knot, Brian and his better half welcomed their first child, a baby boy, Calvin Bradley Fichera. Their little bundle of joy was born on 17th December 2016. The proud father announced their baby’s birth on Instagram sharing a photo of the birth card. “Dylan is doing amazing, baby is doing amazing!!!,” wrote Fichera alongside the post.

Calvin weighed 8.3 pounds and measured 52 cm long at his birth. Dylan announced her pregnancy in June 2016 during a round of Friday Fishbowl where she also revealed the couple was expecting a boy.

More than three years after welcoming their first kid, the husband-and-wife gave birth to their second son, Oliver George Fichera on January 2, 2020. The couple welcomed their second child after an “emotional journey” with infertility.

Dylan previously revealed that she had suffered a miscarriage after struggling with secondary infertility for a long time. Dylan and Brian were reportedly having trouble conceiving their second child and were thinking of IVF. Meanwhile, Brian shared his side of the story with Today in June 2019. There, he shared how he was helpless after his wife failed to conceive their second child even after a number of attempts.

Brian further said that the emergency C-section performed during Calvin’s birth left scar tissue in Dylan’s uterus. It ultimately brought issues with her menstrual cycle and with conceiving another child. After that, Dylan underwent a medical procedure to clear up the scar tissue. And eventually, the couple got pregnant with their second child.

Eventually, on September 29, 2021, Brian and his spouse gave birth to their third child, their third son, Russell “Rusty” James Fichera. The baby was born six weeks premature. The happy mother herself shared the news on her Instagram on October 2, saying she had been full of emotion and gratitude. She wrote,

“God has blessed us with baby Russell earlier than expected but taken care of us the whole way. I couldn’t imagine waiting until November to meet him.”

The family of five happily lives in their Manhattan home as of 2022. Both Brian and his wife share their time with their kids with fans via social media. We can see a number of posts on Brian’s Instagram with his three kids. Besides, the captions he writes alongside those posts reflect how grateful he is to be a father of three.

Brian’s wife, Dylan is a renowned meteorologist who has been working for NBC News for a long time. Dylan is particularly known for hosting the Weekend Today on the network. She hosted the show for nearly a decade before leaving the show in early 2022.

Dylan said she decided to leave the show so that she can give more time to her family. In her words,

“You know, I’m just watching that and looking back, I started in  September in 2012, and I got married in October, so in the time I’ve been on Weekend Today, I have gotten married, and I’ve had three sons.”

“It really is incredible just to look back and think of the things I’ve been through, and not to mention everything I’ve done on the show.”

The 40-year-old NBC meteorologist, Dylan was on the way to Harford, Connecticut from New York City when the car she was riding had an accident. During the accident, Dreyer smashed her head against the window and had a concussion which she later confirmed on Twitter.

Her husband, Brian Fichera forced her to take a rest although she had a minor concussion due to which she missed the Weekend Today show. She said,

“I’ve been covering storms for 10 years, and I’d never been stuck in one before. The concussion was just minor, but my husband forced me to rest and take it easy and lie around a lot more than I wanted to.”

“That’s the best way to get through any h read injury, though it was low-impact. I’m totally fine now,” concluded Dylan.

What is Brian’s Net Worth? His Wife is Richer Than Him

Brian has been working as a producer, writer, as well as photographer for two decades. During this period, he has worked for different organizations. Although the exact amount is yet to be revealed, we believe Brian Fichera has hundreds of thousands of dollars in net worth.

Meanwhile, his wife, Dylan is a very popular meteorologist in America. She has earned well from her profession and she is richer than her husband as well. As of 2022, Dylan Dreyer has a net worth of $4 million. According to Celebrity Net Worth, Dylan used to earn $2 million in salary until she was hosting the Weekend Today on NBC.

Meanwhile, talking about their properties, the couple used to own a small 750-square-foot apartment with one bedroom and one bathroom. They put their house on market in 2015. Shortly after putting their house on the market, the husband and wife purchased a three-bedroom house in Manhattan, New York.