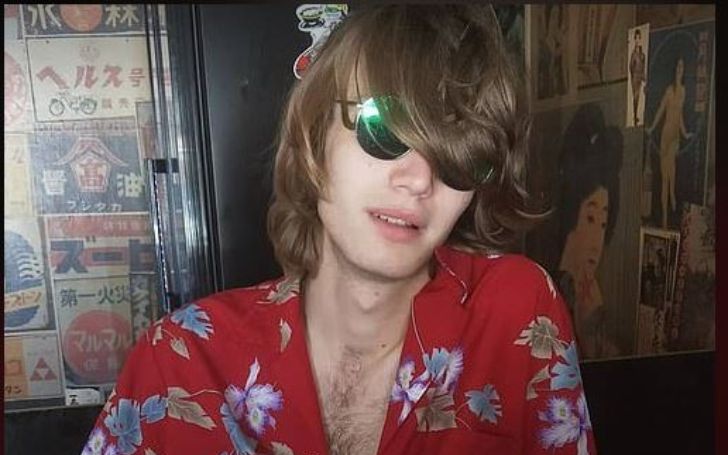 Chance Hogan is a musician and the lead vocalist of an LA-based band Rowdy P. He is also known as the son of an Australian actor, Paul Hogan, an actor from the fame of Crocodile Dundee (as Michael Crocodile Dundee).

Chance’s father, Paul predominantly became popular from playing in the action-comedy movie series, Crocodile Dundee. However as it appears his youngest son, Chance doesn’t seem interested in following the line of his father’s profession.

He instead is a bit of an entertainer with music and songs. Know a bit more about him in the headings under.

Chance Paul Is In The Band

Chance is widely reported to have been born in 1998 albeit variable. He though mostly grew up in Santa Barbara, Los Angeles, and studied at New Roads School.

The long-haired musician currently plays in a punk band called Rowdy P. Chance apparently discovered his passion for music while growing up; he eventually formed Rowdy P with other three members: William Deza (guitar and bass) and Nick Friedman (drums and bass).

Paul’s junior-most child is the lead singer and songwriter of the band, which is predominantly active in Los Angeles. In August 2018 the band released their debut album Dirge. Chance occasionally tells how the band is doing and the what-about of his crews through his Instagram.

Chance Paul Was A Bit Troubled Youngster; Once Vomitted During A Show

Paul’s son with his ex-wife, Linda Kozlowski, Chance apparently has quite the reputation for giving tabloids to write something about though almost always in an unwelcoming manner.

As such in May 2018 the paparazzi caught Chance vomiting outside of a venue in Santa Monica where his band had just performed. Woman’s Day later reported the up-and-coming singer’s father, the Australian actor experienced a little hurt after seeing pictures of his then-teenage son puking.

In the photographs, Chance appeared somewhat disoriented as he leaned up against a wall. At times, the youngster ran his fingers through his hair while looking very sickly.

Meanwhile, one particular image appears to show him ejecting things from his mouth. Chance had just finished a 30-minute concert when he walked away from some unidentified mystery blonde companion to throw up outside.

Some insiders said, ‘It’s no secret Chance has been difficult to deal with over the years… and It goes without saying the last thing he wants is to see Chance destroy his life.’

The closed ones also reported Chance’s father ‘is struggling to deal with his wayward son (then 19), after confronting photos of the teenager vomiting in the street surface’ The source further reported how the veteran Australian comedian was living in a constant fear that one day he’ll get a call to say something bad’s happened.

This wasn’t the first time, the young adult caused stress to his dad. In the past, people criticized him for smoking ‘suspicious cigarettes’, and his alleged ‘obsession’ with Satan. In 2015, some viewers saw Chance at 16 drinking beer and smoking what appeared to be a bong on the balcony of Paul’s home.

Chance’s famous father, Paul met his mother Linda Kozlowski while filming Crocodile Dundee in 1986. They married in 1990 and remained husband and wife until their divorce in 2013.

After separating from Linda in 2013, the Fatty Finn actor effectively raised Chance as a single father. Some, on the other hand, criticized Linda for keeping her distance from Chance and blamed her for remaining absent in his life.

Linda, however, denied any suggestion that she had been an absent parent, telling Daily Mail Australia: ‘This is not the case at all. I am back and forth a lot and spend quite a lot of time in LA with Chance.’

Kozlowski once revealed Chance was the one who decided to live with his father, Hogan due to the fact that his house had a “teen hangout room.” Though in 2016, some reported Linda and Paul had considered reuniting for the sake of their son, Chance.

The Rowdy P’s vocalist’s mother, Linda is also known for the 1993 film The Neighbor. Despite the rumors of Linda getting back with Paul, she moved on married her Moroccan business partner Moulay Hafid Babaa in Dec 2017.

Chance Has Five Half Siblings

While Chance is the only son of his father, Paul, and Linda, he has five half-siblings from the latter’s relationship with his first spouse, Noelene Edwards. They are Lauren, Brett, Clay, Scott, and Todd.

In Feb 2017 there were reports stating one of the sons of Paul and Edwards suffered a stroke but it never came to light who exactly had become ill.

Paul nonetheless provided this ill son of his with complete financial, emotional, and parenting support. Chance’s father, the Lightning Jack actor was the husband of Noelene Edwards from 1958 to 1981; they though had remarried within a year yet divorced for good and all in 1986.

Chance Paul Was A Satan Worshipper!?!?

In addition to his fame as a troubled teenager, Chance once also had some other labeling to his name, a Satan worshipper. Paul and Linda’s only son created such circumstances himself when in May 2014 he then 19 posted some troubling pictures.

Further, there was a time when his Instagram pages would entertain only satanic images. One of those contained the musician pulling strange faces, including one in which he has an upside-down cross drawn on his forehead.

He had captioned this particular photo with: ‘Carving s**t into tables.’ Several other Instagram pictures displayed the satanic ‘Devil’s number’ 666.

Chance Hogan (pictured), 19, denied being ‘a satanic devil worshipper’ on Monday after posting troubling pictures online and vomiting in a street in LA. He additionally said people asking him: ‘It’s like, “Hey, you’re that Satanist drug-taking evil guy, right?”‘

Does Chance Paul Have A Girlfriend?

While it is unclear who he is dating in the present, a while back in Jan 2016, some noted the troubled teenager Chance proudly parading his then-new girlfriend in the streets of Los Angeles.

This was amidst the time when Chance was making the headlines for all the wrong reasons in recent months. The son of an Australian father was walking arm-in-arm with a mystery redhead on their way to a convenience store in LA. At the time, tabloids had also managed to snap pictures of them cuddling as they sipped at cans of energy drinks.

How Rich Is Chance Father? What Is His Own Net Worth?

When it comes to celebrity league, Chance’s father, Paul is moderately rich with a net worth of over $20million or so. And the majority of this fortune of the Crocodile Dundee actor is from 51 years of acting during which he has been in over two dozen of projects TV and films combined.

What’s more, even at 80, the Sydney-born actor is still not slowing down with as yet some entertainment projects on the line.
Though on the other hand, it’s barely a beginning for Paul’s son, Chance. While the 23-year-old has had a fair share of ups and downs even before starting his musical career properly, there’s no telling if he won’t be as rich as his father in the long future or even earlier.

It nonetheless is exclusively a matter of time before some legit accounting is done for Chance Hope’s net worth.