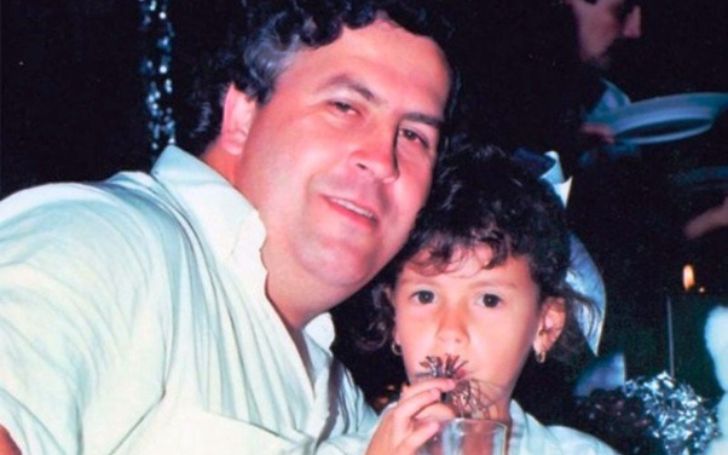 Manuela Escobar is the daughter of the world-famous drug lord, Pablo Escobar and his wife Maria Victoria Henao. Ever since the demise of her father, Manuela has been living a relatively private life partly because of her dad’s notoriety.

Growing up, Manuela had it all. After all, her father was one of the richest men of the time. There are many tales of how Pablo went to many lengths in order to keep his daughter safe and well.

Well, that daughter is all grown-up and now people are curious to know about her. So let’s take a closer look at the low-key life of Pablo Escobar’s daughter Manuela Escobar and find out what is the young girl doing now? Furthermore, know about her reported suicide attempt!

Born on May 25th, 1984, Manuela spent her early life traveling across Colombia with her parents. It was due to her father Pablo’s dangerous profession that the family had to move quite a lot.

The 37-year-old girl belongs to the Colombian-Argentine nationality and has Colombian ethnicity. Her father Pablo was born and raised in the nearby city of Medellin. He was one of seven children of the farmer Abel de Jesus Dari Escobar and Hermilda de Los Dolores Berrio.

After the death of her father, EScober alongside her mom and brother, Juan Pablo Escobar fled the country in 1995. They moved to several different countries like Mozambique, then Brazil, Ecuador, South Africa, and Peru before eventually settling in Argentina.

Manuela had to move around quite a lot during Her Childhood

Since the demise of her father, Manuela, her mother, and her brother had to face a lot of hate all because of their association with Pablo. Her father’s rival cartel, Cali Cartel wanted them to pay them millions of dollars as a repercussion of her father’s heinous crimes against them.

The constant threats made their life miserable. This is why the family of three decided to flee to other countries. Sadly, that too didn’t work out for them as not many provided them refuge. Eventually, after trying they found themselves in the African country of Mozambique.

After living in the African country for a brief period of time, they then moved to Brazil. Likewise, they also moved away from Brazil after some time and settled in Argentina.

During her time in Argentina, Manuela joined a local Jewish high school. She is also a bachelor’s degree graduate.

Manuela is living with a new identity

Its pretty much self explanatory that Manuela Escobar and her remaining family member now lives with a different identity. Since moving to Argentina, Pablo Escobar’s daughter changed her name to Juana Manuela Marroquin Santos.

Apart from herself, her brother and mother also assumed a new identity. The family of three after settling in the country started leading a relatively peaceful life. Her mom also started her own real estate business and fortunately enough Maria was quite successful at it.

Manuela Escobar’ Mother and Brother were arrested in 1999

Everything was going great in her life when all of a sudden her family’s real identity was discovered. It was back in 1999 when one of her mom’s associates found out that they are related to the long-dead drug lord, Pablo Escobar.

After the incident, her mom, Maria Henao, now known as Maria Isabel Santos Caballero, ran away without leaving a trace. A year after the incident authorities tracked her down and sent her to prison for one and a half years alongside her son Juan.

According to the Buenos Aires’ authorities back then, they were arrested on the charge of laundering drug money and also falsifying documents. Thankfully both of them were cleared out from both the charges.

Although everything got settled out, Manuela didn’t take the identity revelation pretty well. She confined herself inside her room and even denied going to school altogether.

What is Manuela Escobar doing nowadays? Where does Pablo’s daughter live at present?

As we mentioned earlier, the beautiful daughter of Pablo Escobar refrains from the media spotlight. Because of her father’s deed, the family had to live a rather private life.

Escober’s daughter studied Public Relations and was a very proactive girl. However, she doesn’t like being the center of media attention and till now has refrained from any sort of media activity. To this day, she fears for her life thinking that her father’s enemy might come around and harm her loved ones.

There are various tabloids that have shared a lot of pictures of Manuela but we cannot say for certain if the photos are accurate or not. But one thing that we can say for certain is that Manuela is living her life in Argentina without any spotlight from the media.

What Happened to Manuela Escobar?

Living most part of her life escaping from one place to another and her often family legal troubles, it is evident that Manuela has some personal problems. Online sources suggest that Escobar’s daughter Manuela also suffered from severe depression back in the late 1990s. And her brother once said that Manuela even attempted to commit suicide.

Manuela Escobar Net Worth: Her father was a billionaire

Being the daughter of one of the wealthiest drug dealers, Manuela has amassed quite a good net worth although the figure is yet to out.

As we all know, Pablo was one of the most influential drug lords of all time. At the time of his death in 1993, Escobar was worth a staggering $30 billion, which is now equivalent to $64 billion.

There are many tales of how Pablo didn’t care for money when it came to his family. One time he literally burned $2 million worth of cash just to keep his daughter Manuela warm. Further, both of his children lived a relatively lavish life.

But after his demise, one cannot say for certain if his surviving family was able to get any money from his drug empire.

Is Manuela Escobar Married to a Husband?

Like we mentioned earlier that Manuela prefers to live quite a secret life. And the same could be said for her love life as there are no details on her personal life. Thus, we can’t say whether Manuela does have a husband or is leading a single life at present.