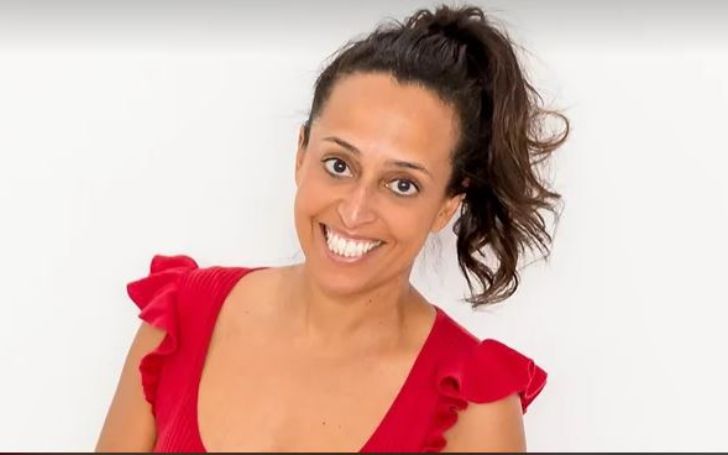 Chudney Ross is a children’s book writer, entrepreneur, teacher, and TV host who is better known as the daughter of Diana Ross, the ex-lead singer of the vocal group The Supreme, and her ex-husband/music manager, Robert Ellis Silberstein.

The Ain’t No Mountain High Enough singer, Diana’s daughter, Chudney is the founder of a mobile literacy enrichment program, Books and Cookies. Her company focuses on bringing children’s bedtime stories to life and building a community around literacy.

Read in excess about this daughter of Diana Ross; what was her upbringing like; her career, her husband, her children, and even the breakdown of her wealth.

Who Is Chudney Ross’s Father?

The entrepreneur/writer, Chudney Ross, full name, Chudney Lane Silberstein, was born in Nov 1975. She reportedly grew up in Greenwich Connecticut.

Chudney’s father is the music business manager Robert Ellis Silberstein. Her parents, Diana Ross and Robert were married from 1971 to 1977. When together the ex-couple had three daughters, Rhonda, Tracee, and Chudney.

Ross is a graduate of Georgetown University, Washington DC (1993 – 1997) where she earned a Bachelor of Arts (B.A.) in English and Fine Arts.

All Of Chudney Ross Siblings Are Famous Including Tracee Ross

Almost all of Chudney’s siblings including her half brothers and half sisters are in the entertainment industry one way or the other. Both of the Connecticut-born businesswoman’s parents, Diana and Robert have several other children from each of their other partners in addition to when they were husband and wife.

Diana has two more sons (Chudney’s half brothers), Ross Naess and Evan Ross both born from the Mahogany singer’s former marriage to her late ex-husband, Arne Naess Jr. Ross is a nightclub owner in LA while Evan is an actor known for his work in The Hunger Games.

Chudney’s other siblings include Rhonda Ross Kendrick and Tracee Ellis Ross; the sisters including Chudney herself are the three daughters that Diana had when she was the wife of Robert Silberstein. Chudney is the youngest among Rhonda and Tracee.

As mentioned, Chudney’s elder sister, Tracee Ellis Ross is known for portraying Dr. Rainbow Johnson in the ABC comedy series, Black-ish. The eldest sister, Rhonda just like her mother and is a singer and an actress.

Who Is Chudney Ross Married To?

The 46 years old Ross is married to Joshua Faulkner. Faulkner and the daughter of Billboard chart topper married in 2015. The couple exchanged vows in Maui, Hawaii.

Together the duo has two children, Callaway Lane and Everlee.

The couple had their first child, Calloway Lane in September 2012. They likewise had their other daughter and their youngest, Everlee in late 2019.

It was Chudney’s husband, Joshua Faulkner who had first laid his eyes on Diana’s daughter. Faulkner noticed the Grammy winner’s daughter whilst scrolling through his Facebook feed and thumbing up one of his friends’ photos.

En route, his friend on Facebook happened to have Chudney’s picture after which Faulkner got hooked. Joshua and Chudney eventually met each other in person for a cocktail through their mutual friend.

At a loud bar, they started their conversation and gradually got comfortable with each other. Interestingly, Chudney asked Joshua to let her touch his face during their first meeting. Recalling that, Faulkner once said the gesture was weird.

He added his future wife petted him on their first date. As for Chudney, she said how handsome her partner was on their first meeting and how rare it was in LA to find a gentleman like him. She explained by touching his face, she wanted to know if he was for real.

The artist’s daughter and Faulkner then would date for the next couple of years before the latter asked Diana’s daughter for the marriage. However, by that time, the pair were already parents to their first child, Callaway.

In fact, Joshua went down on his knees in front of their daughter.

“Callaway handed me a box wrapped in a drawing she had made. When I looked back up, Joshua was on his knee, asking me to be his wife,”

said the mother of two to Inside Weddings. Foresightedly, it was also Chudney’s birthday. The youngest daughter of the ex-Motown artist said the proposal was perfect.

Chudney Ross Had A Hawaiian Wedding

For their wedding, the couple always had a destination marriage on their mind. The couple during an interview said since they had attended several destination nuptials and liked all of them, they also wanted one for themselves.

Chudney explained that with such kinds of weddings the couples get to spend more time with family and friends.

“It’s like summer camp with everyone you know, but celebrating love!”

Ross also said how easy it was for herself and her then-fiance, Joshua to choose Hawaii as the location. For the couple, the island held sentimental values from the beginning as their first big trip together was to Maui.

Chudney also learned that she was pregnant with Faulkner’s baby while on a trip with her singer mother to Ohau. For the big day, the couple considering the details of their family and friends comfort, schedule the event during Hawaii’s most suitable weather.

Chudney confessed it was rather difficult for them to find the vacant property for the wedding. They eventually got the Montage Kapalua Bay.

The celebrity daughter and her artist mother Diana made the majority of the planning. Chudney’s sister, Tracee helped her sister with the bridal attire.

Diana officiated Chudney and Faulkner’s nuptial as she had also served as the officiator for her two sons, Evan and Ross Naess. Chudney’s groom, Joshua sported a white linen suit which he paired with a contrasting kukui nut shell lei.

The youngest daughter between Diana and her ex-husband, Robert, Chudney chose to remain away from the cameras. She instead went the entrepreneur path.

Following her graduation from Georgetown, Ross became a teacher with AmeriCorps’s Teach for America program. She would teach at Elementary school for years.

During those periods, she developed a love for children’s literature and that along with her advocacy for children’s causes motivated her to open her first business, “Books and Cookies,” a children’s bookstore in Santa Monica.

It additionally is an enrichment center and event space. Chudney started Books and Cookies initially as a children’s bookstore, kid’s cafe, and enrichment center. The project, however, later would become an on-the-go mobile enterprise. In the meantime, the Endless Love singer’s daughter along with her team travels around LA sharing high-energy and interactive story times for the children.

Further, the Greenwich native is also Chief Kid Officer at The Jane Club. It is a space that Chudney created for children to learn, play and grow with their mothers who have 9 to 5 jobs.

She Has Worked For Some Series

In the past, Chudney was also a producer and production manager for TV series like Mesmerized (2004), Livin’ Large (2002), and Fame (2003). She though never appeared on camera as an actress or in any other form.

The wife and mother’s profile on the image sharing handles mostly includes images of her outdoor activities, a great many glimpses of her daughters and her husband, and occasionally popping up of her actress sisters, her famous mother, and others. She additionally also throws some TBT moments on her IG and of course her books’ promotions.

Is Chudney As Rich As Her Mother, Diana Ross; What Is Her Net Worth?

As one of the ex-members of the world’s best-selling girl groups of all time and the only female artist to have had number-one singles on the Billboard Hot 100 as a solo artist, Chudney’s mother is unsurprisingly rich with a net worth of over $200 million.

Considering that quotation versus the bed-time storyteller’s less of a famed career compared to her mother’s grand legacy; it would be a bit of a stretch to profess Chudney is almost as deep-pocketed as her super-rich mother.

Nonetheless, assuming the fact that she is an entrepreneur and a fairly successful one it might be safe to say, Ross, at least, has a net worth somewhere in the confines of six figures or possibly even millions.