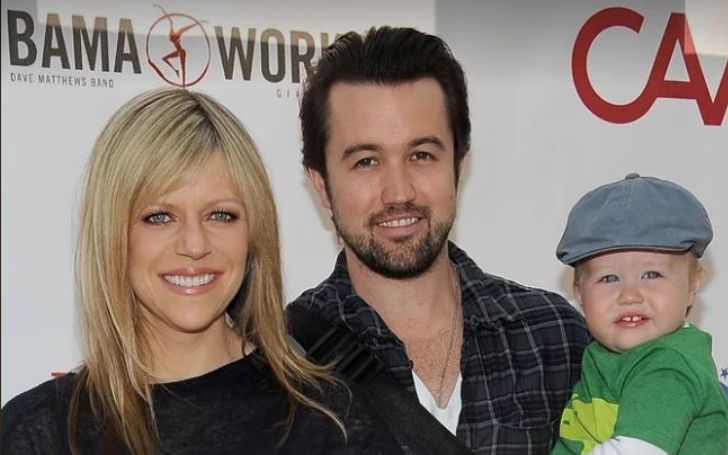 Axel Lee McElhenney is the son of actress, Kaitlin Olson and her longtime partner and husband, Rob McElhenney. Both of Axel’s parents are known for being two of the lead stars on the FX longest sitcom, It’s Always Sunny in Philadelphia; the mother, Olson as Deandra Sweet Dee Reynolds, and the father, McElhenney as Ronald Mac McDonald.

The couple has been together since the mid-2000s and now are parents to two children including Axel.

Read about the couple’s first son, Axel in the headings beneath; know how he is related to some odd storylines on his parents’ show. Also, learn how parenthood has been for Kaitlin and Rob since his birth; how they are raising him and his brother, some memorable incidents involving Olson and her son, Axel, and further.

Olson admits when she found out she was going to have Leo she panicked as she didn’t know if she could love anyone as much as she had been loving her husband and Axel up until that point.

However, once Axel’s younger brother was born, Olson, in 2015, told Time how her second child stretched her heart, and her capacity to love increased. Costars Kaitlin Olson and Rob McElhenney welcomed their first child, son Axel Lee McElhenney,

Axel Lee McElhenney Was Born When His Mother, Kaitlin Was In The Middle Of Watching The Game

Olson and McElhenney’s first son, Axel includes quite an interesting story. He made his actress mother go into labor when she was in the middle of a game between the Philadelphia Phillies and the Los Angeles Dodgers.

Recalling the moments when she was just about to go into labor, Olson told People,

“I went into labor at the Phillies/Dodgers game on Tuesday night. As soon as Ryan Howard hit a three-run home run, we felt comfortable leaving to go have our baby. We love him like crazy, even though he made us miss the second half of the game.”

Olson had gone into labor when she was still at home. The actress, however, thought, that since it would take time, she might as well go see the game between the Dodgers and the Phillies. Kaitlin has been a fan of the latter since she was young.

Her initial plan was to go for a walk around the neighborhood and to the grocery but the Oregon-born actress went to the game. When it was about time Olson told Glamour Magazine that she had made it through five or seven innings. The Emmy nominee admitted that the game was really important.

Olson to People in Sep 2010 said she and her husband love him like crazy even though he made them miss the second half of the game.

Axel Parents, Rob McElhenney And Kaitlin Fell In Love On The Set Of It’s Always Sunny in Philadelphia

Later when their private love was out in the open, Olson revealed she had fallen for McElhenney way before he would. They eventually started a relationship during the show’s second season but for the first year, they kept it a secret.

They dated for two years and finally tied the knot in late September 2008 in Malibu at a vineyard. Two years after the wedding, Olson and McElhenney became parents to their first child, Alex. When they found out they were going to have Axel, Olson said she and her actor husband were stupidly excited and that they were totally beside themselves.

Similarly, their youngest son Leo was born on 5 April 2012.

Axel did appear in his mother’s show, It’s Always Sunny in Philadelphia in some sort. In fact, the writer scooped the real-life pregnancy of Olson with Axel in the show’s sixth season in the form of Dee’s pregnancy.

Dee’s expecting a baby in the show’s sixth season surprised many and was something more out of the blue.

Of that particular storyline, Olson said it was really awesome being able to write her real-life pregnancy into the show. The now 46 years old was in her second trimester when the filming happened. Later the episode where everyone knows about Dee’s pregnancy was titled “Who Got Dee Pregnant?”

Kaitlin Once Revealed Axel Lee McElhenney Was A Perfectionist

Olson’s son, Axel, apparently once used to be a perfectionist. This the blonde actress confirmed herself while talking to Raising Whasians in June 2016. Olson at the time said how his eldest son used to get so upset when his legos would fall apart which apparently, to him would be like the end of the world. The Finding Dory actress added her son would then feel like he was a terrible person.

Axel, however, at the time, also happened to be super smart as per his actress mother.

That reportedly would be a theme of Axel’s whole life back then and Olson revealed how she had been trying to tell him that no one was perfect. And allegedly that’s the message that the Vacation actress has been trying to impart to her kids ever since.

Kaitlin’s Different Approach To Teach Her Son Axel About Safety

As a parent who went through a horrific accident when she herself was a kid, Olson says she doesn’t always warn her sons, Axel Lee McElhenney and Leo by saying “Be Careful!” The Hacks star thinks it would only make them more fearful instead.

Rather the mother of two while talking to Glamour said around her house she and her husband have the custom of saying, “Check in with your body.”

Olson and McElhenney apparently remind their sons to keep themselves safe. As per the Heat actress herself, she tries to teach Axel and Leo to be aware of their surroundings and keep themselves away from harm.

Olson said she tried to teach her sons to look around and made them figure out for themselves what they need to do to keep themselves safe. The Arizona actress apparently wants their kids to take risks but also take the helmet.

Axel’s mother when she was 12 had a serious bicycle accident when she was hit by a vehicle. The resulting effect landed her in a hospital with a fractured skull requiring several reconstructive surgeries.

For someone who has been an integral part of the longest American live-action comedy series, Axel’s parents were bound to be millionaires. Having been the leading stars of It’s Always Sunny In Philadelphia for a whopping 15 seasons, both Kaitlin and Rob have an estimated net worth of over $50 million each. Further, since Axel’s father, Rob is one of the creators, reports suggest the 45-year-old actor might have fortune a lot more than what sources claim.
With a combined net worth of over $100 million, Axel’s guardians in every respect fall in the league of super-rich celebrities.

Axel and his brother have to abide by the rule that whenever someone is coming into or leaving the house, be it their housekeeper, the boys have to make eye contact and say hello to the person; especially if they are in the middle of the screen time.