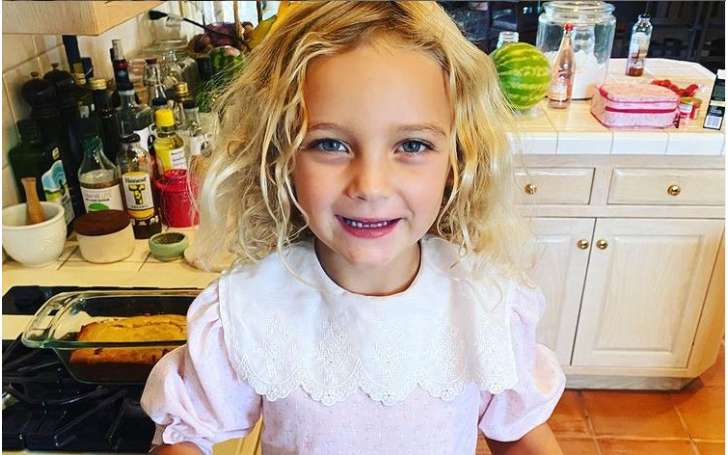 Fianna Francis Masterson is a star kid who is the daughter of Danny Masterson and Bijou Phillips. Ever since her birth, Fianna has been in the media spotlight. And why wouldn’t she be, after all, her father is a famous actor.

Her father Danny is famous for his roles in The Ranch, That 70s Show, Men at Work. However, his career took a drastic turn when he was accused of rape by three different women.

Besides, today we’re going to find out about Fianna Francis Masterson and find some interesting facts about her!

Born on February 14, 2014, in the United States. The only daughter between Danny Masterson and Bijou Phillips, she has American nationality. Fianna’s comes from Anglo-Scottish, Irish, and Greek ancestry.

Her name Fianna means fair or white. According to Irish and Scottish mythology Fianna were independent bands of warriors.

At the time of her birth, Fianna weighed 8 lbs and 5 oz and measured 21 inches long.

Her father and mother started dating back in 2004. Initially, the couple first came across each other at a celebrity-packed poker in a poker tournament in Las Vegas. The event had many celebrities in attendance with Danny, a hardcore poker player, being one of them.

The future husband and wife were incidentally seated next to each other at the card table. While recalling the moment, Bijou said, “I was asking him for advice.”

Moreover, Bijou mentioned how Danny didn’t even bother to give her any attention while many other guys were simply laughing at her jokes and constantly flirting with her.

Danny had met his future wife when she was 15

In an interview with Paper Mag, Danny said,

“I had only known her as the little crazy girl. After Vegas, and talking to her a few times, I was shocked by how unbelievably intelligent she was. She knew every book I had ever read. I was like, this girl is amazing.”

After they started dating, Danny and Phillips appeared in movies including Made for Each Other, The Bridge to Nowhere.

When did they marry?

After dating for several years the pair exchanged vows on October 18th, 2011. The wedding took place in the countryside in Tipperary, Ireland.

The nuptials’ location was a node to Masterson’s Irish heritage. The formal wedding was held at a private castle that overlooked the picturesque Tipperary.

Further, the weeklong celebration was an intimate affair with several of the pair’s close friends and family in attendance. Guests including Ben Foster, Mike Pena, and Ethan Suplee and artist Gottfried Helnwein. Danny’s brother Chris Masterson served as the best man.

As for the wedding dress, Dan looked dapper in an Albert Hammond Jr. suit while his bride wore a Zac Posen gown. The couple had gotten engaged in March of 2009.

The year 2017 wasn’t that great for Danny Masterson. Four women came out and accused him of rape. The allegations soon prompted an investigation by the Los Angeles Police Department Investigation.

At the time, the actor denied all the allegations, however, everything kept falling apart for him. Around the same time, Netflix fired him from the show The Ranch in December 2017. Having been fired from the job, Danny stated he was really disappointed in Netflix for taking such a drastic measure. As if this was all not enough, his agency United Talent Agency also let go of him.

Then in 2019, four women filed a lawsuit against Masterson and the Church of Scientology in stalking and harassing claims. One of the women was Danny’s ex-girlfriend for which he even stated,

“I’m not going to fight my ex-girlfriend in the media like she’s been baiting me to do for more than two years. I will beat her in court—and look forward to it because the public will finally be able to learn the truth and see how I’ve been railroaded by this woman… and once her lawsuit is thrown out, I intend to sue her and the others who jumped on the bandwagon for the damage they caused me and my family.”

It has been around three years since the case first came to fruition and so far there has been no verdict. After Masterson was charged with the rape of three women, he pleaded not guilty in January 2021.

Then in a four-day preliminary began in May 2021 in which Judge Charlaine F. Olmedo said that she found all three witnesses credible and Danny be bound over the trial on three counts of rape.

Again in June 2021, he pleaded not guilty to the rape accusations that apparently occurred between 2001 to 2003. Moreover, his defense attorney even claimed all three women are colluding against Danny.

Well, the final verdict isn’t out so we will have to wait and see how this will turn out.

Both her mom and dad are active in the entertainment industry. Although her mother isn’t quite active nowadays, she has appeared in a number of movies and TV series. She is famous for her work in Bully, Havoc, Hostel: Part II, Almost Famous. Moreover, she also modeled for a number of brands.

How much is Fianna Francis Masterson’s net worth?

Considering how both her mother and father are involved in the entertainment industry for a long time, it’s no wonder that Fianna lives a lavish life.

Her father is worth $8 million and on the other hand, her mother also shares her father’s huge fortune of $8 million.