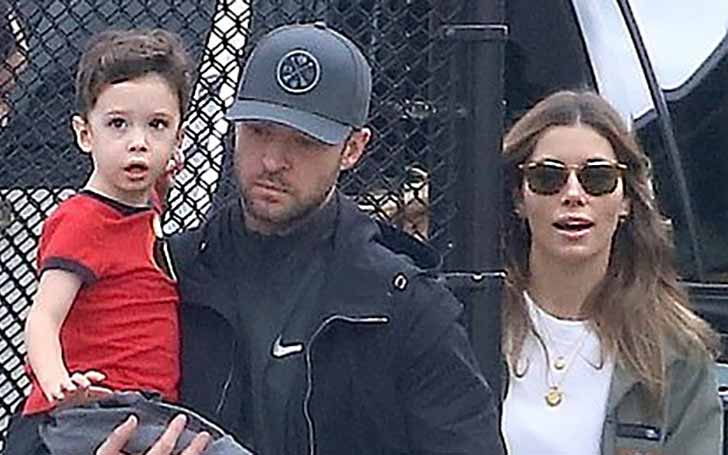 Silas Randall Timberlake is famous as the first son of singer and actor Justin Timberlake and his wife of nine years, Jessica Biel. Justin and Jessica have kept their child under the media radar so that Silas doesn’t appear in the media often. Silas might indulge in being in front of cameras and public attention when he grows up, but the star kid is just 6 years old and is probably attending school.

Besides Silas, Timberlake has another son with his wife whom the lovebirds kept secret for a long time after his birth. As a matter of fact, the 40-year-old actor only made his identity public around 9 months after his birth in 2021. Being a son of superstar parents, Silas has attracted all eyes on him ever since his birth, but we have to say that not much about him has been revealed as of yet.

So, today, we’re talking in detail about Silas Randall Timberlake in this article. Read it through to know every interesting fact about him.

He was born Silas Randall Timberlake on April 8, 2015, in Los Angeles, California. The pair’s representative confirmed the arrival of the little boy to People. Silas was named after the middle name of Timberlake’s maternal grandfather, Bill Bomar. Besides, Randall is Justin’s own middle name and his father’s first.

Timberlake and Jessica Biel kept their pregnancy a secret for months. They only revealed the news in January 2015, on Timberlake’s 34th birthday. “Thank you EVERYONE for the Bday wishes! This year, I’m getting the GREATEST GIFT EVER. CAN’T WAIT,” Timberlake captioned a photo of himself kissing his wife’s belly.

Silas has one younger brother, Phineas Timberlake. The couple welcomed their second baby in 2020, however, they kept the news hidden for months. It was only revealed in January 2021, when the singer made his appearance in the Ellen DeGeneres Show. Justin said he and his wife had a new addition to the family, however, he didn’t specify when they gave birth to the baby boy.

Actress Jessica Biel talked about her pregnancy and baby birth during a conversation with Vogue in 2018. Back then, Jessica gushed about the unplanned surgical procedure in delivering her first son, Silas. Meanwhile, The Sinner actress and her husband wrote about their experience in celebrity nanny Connie Simpson’s book The Nanny Connie Way: Secret to Mastering the First Four Months of Parenthood. They wrote,

“We had two midwives, one doula, one meditation birthing class, a ton of hippie baby books, and a lovely home in the Hollywood Hills that we had turned into a labor training facility that we called the octagon.”

They added that they had planned for a natural birth, however, all their plans fell apart after Biel needed to “transfer to the hospital and an emergency C-section.” Timberlake further said, “we arrived home exhausted, disillusioned, and totally in shock.”

Justin and Jessica Made Donations on Silas’ Fifth Birthday

Unlike other celebrity couples, Timberlake and Jessica don’t share many photographs of their children. But back in April 2020, on Silas’ fifth birthday, the proud mama took to her Instagram wishing her boy. She shared an old photo of her and her son while in the caption she mentioned she and her actor husband were making donations to celebrate their son’s birthday.

Biel wrote they were supporting Save the Children and Feeding America who she said were “doing so much good work to keep kids and families healthy and fed during the covid pandemic.”

Silas’ parents, Justin and Jessica have been married for nearly one decade and have been together for over 14 years. Timberlake and Biel first met at a birthday party that Timberlake threw back in 2007. However, they didn’t have interaction on their first meeting. It was later when Justin’s friend called her and they spoke on the phone where he invited the actress on a date.

In May 2007, Timberlake and Biel went public as a couple when they attended the UK leg of Timberlake’s tour. They made their frequent public outings after their relationship became public and they were seemingly head over heels in love with each other.

Meanwhile, Timberlake and Jessica Biel’s journey has not been the smooth one. They have faced some trouble as a couple and at one point, they even called it quits. They broke up around June 2011 and just a month later, they rekindled their romance.

In December 2011, Justin got down on one knee and asked his girlfriend to be his wife. Recalling his proposal, Timberlake told Popsugar, “When I did propose, I was saying to her, I was like, ‘Oh look at the shadows on the mountains,’ and I had the ring on my pinkie.”

Around five years after Justin and Jessica started going out, the pair got married in 2012. They tied the knot in the intimate wedding held in the Italian countryside. Timberlake sang a song as Biel walked down the aisle in a pink dress.

“It was an original piece I wrote specifically for the evening and for her,” Timberlake later shared with People magazine.

Silas’ parents have been extensively involved in the entertainment industry. While his father, Justin Timberlake is a singer, producer, and actor, his mother, Jessica is an actress, model, singer, and producer. With more than two decades in the industry, the husband-and-wife have earned a hefty amount of money alongside immense fame.

Justin Timberlake and Jessica Biel have a combined net worth of $250 million as of 2021. The site further mentioned, Timberlake has earned the majority of their net worth i.e., $200-$230 million.

Silas lives in Los Angeles with His Parents

Silas Randall Timberlake is aged 6 as of 2021 and he is attending school level. The star kid currently lives with his parents in their Hollywood Hills house. However, recently in August 2021, Silas’ parents decided to relocate to Tennessee to live a country life.

Us Weekly reported that a source close to the singer and his family revealed they relocated to Tennesse to get out of Los Angeles and experience country life.