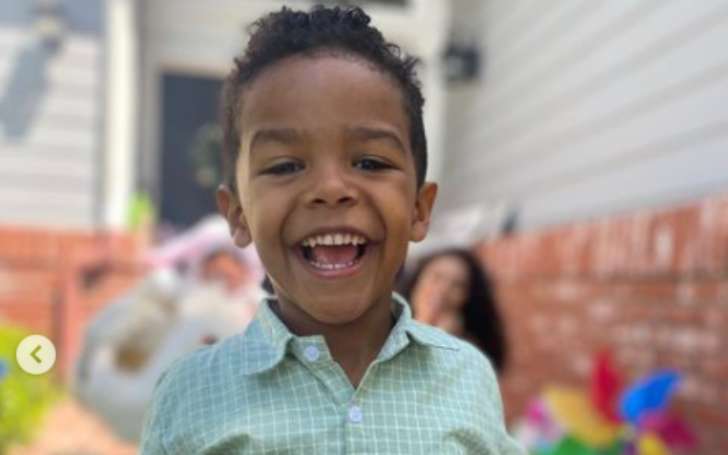 Golden Cannon is a star kid who grabbed media attention as the son of the famous American rapper Nick Cannon. He is also a host, actor, and comedian who is well known as the former host of the prominent TV show, America’s Got Talent.

Golden Cannon’s mom, Brittany Bell, on the other hand, is also a model and a dancer. Being born to popular celebrities, the celeb kid has already got hype from the media as soon as he was born. He is the first child of his mother and father together, however, his parents aren’t married yet. So, why didn’t they tie knots? How is the life of the star kid going? Is he getting love from both his mom and dad?

Well, enroll in the article below to know about the life of Nick Cannon’s son Golden Cannon in detail. Also, learn about his parent’s relationship before and after having him.

How Old is Golden Cannon?

Born in the year 2017 as Golden Sagon Cannon, he is 5 years old as of 2022. He was born on February 21, under the star sign Pisces and holds American nationality.

Moreover, Golden belongs to multiracial ethnic background. This is because his father is of African-American ethnic descent and his mother is from the mixed heritage of native American, West Indian, and Black American.

Who Are Golden Cannon’s Parents?

Talking about the star kid’s parents, his dad Nicholas Scott Cannon (aka Nick Cannon) is an American television host, rapper, actor, and comedian in television. He is also popular as the host of the shows like America’s Got Talent, The Nick Cannon Show, Wild’ n Out, Lip Sync Battle Shorties, and The Masked Singer.

Likewise, he starred in notable movies like Drumline, Love Don’t Cost a Thing, and Roll Bounce. Not only this, he has released his debut self-titled album “Gigolo,” and also singles Me Sexy, Looking for a Dream, and many more.

On the other hand, his mother Brittany Bell is an American model, dancer, and beauty pageant titleholder who won Miss Guam 2014. Even before that, she has crowned Miss Arizona USA in 2010.

How did Golden Cannon’s Parents Announce His Arrival?

Like most parents, the former host of America’s Got Talent and his ex-mate were delighted to have their first son together. This was the first baby for Brittany as well as the couple together.

Golden’s mom posted a picture on her Instagram showing her baby bump on 5th Feb 2017 announcing her pregnancy.

Likewise, the father of the child revealed his arrival via his Instagram. He posted a black and white photo of him with his kid and wrote;

Weeping may endure for a night, but joy comes in the morning! No matter how hard the world may hit you, God always reminds us of our purpose! #TrueHappiness Welcome to Earth Son! Golden “Sagon” Cannon 2/21/17 #Awakened.

At the time of his son’s birth, Cannon has just divorced his previous wife, however,  he didn’t have any intention of not continuing his family. He stated that just because his “marriage was over didn’t mean,” he couldn’t “continue his family.” The AGT host further added the third was no mistake and he always wanted five kids.

Though Nick and Brittany had a child together, they didn’t exchange vows. At the time when Golden was born, his mother and father were in a romantic relationship.

The ex-couple reportedly met in 2015 after Nick’s breakup with his then-wife Mariah Carey. The parents of the star kid then started dating but their relationship wasn’t that fluent. In fact, the former duo was on and off for some time and was “on a break” when she became a mother to their son Golden Cannon.

Even though Cannon and Bell were really happy to welcome the child, the former pair allegedly parted their ways for good. The one-time girlfriend and boyfriend hadn’t talked anything regarding their detachment since then. However, they were seen together again on November 9, 2020.

Maybe, the mother and father got back together then as they were holding hands in one of the restaurants in Malibu, California on Britanny’s 33rd birthday. Following this, Nick and Brittany welcomed their second bundle of joy in December 2020, a daughter this time.

Golden Cannon Has a Bunch Of Siblings

As mentioned above, Golden’s parents had another baby after 3 years of his birth. The star kid became a brother to his younger sister named Powerful Queen Cannon.

His half-brothers Zion and Zillion are twins that his dad, Nick shares with his ex-partner DJ Abby De La Rosa. Similarly, Moroccan and Monroe are also twins between Nick and his ex-wife Mariah Carey.

Furthermore, Golden also had a half-brother named Zen, who tragically passed away when he was only 5-months old. He was the only son between Nick and his ex-girlfriend Alyssa Scott.

Golden Cannon’s Mom And Dad Are Incredibly Close To Him

Despite having many children, Nick always tries to manage time for each of them. Golden’s dad has six children in total and still, he manages to spend time with him.

In Golden’s case, he has been a vital part of his life and never misses out on big occasions for his son. He is often seen celebrating his birthdays in addition to visiting him on a regular basis.

Nevertheless, the mom is the full-time caretaker of the baby. Having said that, Nick is also seen posting photos of his kids with Brittany and going out with them. Looking at those pictures, we can say that both the mom and dad are doing great as parents.

Being born in a family of stars, Golden Cannon must be living a luxurious life. However, we are yet to see if the star kid will follow his parent’s footsteps or follow a different path in his career.

As of 2022, his father Nick Cannon’s net worth is $20 million. As the matter of fact, Cannon’s family is considered one of the richest in America. Meanwhile, the mother of a child has a total fortune of $1.5 million.