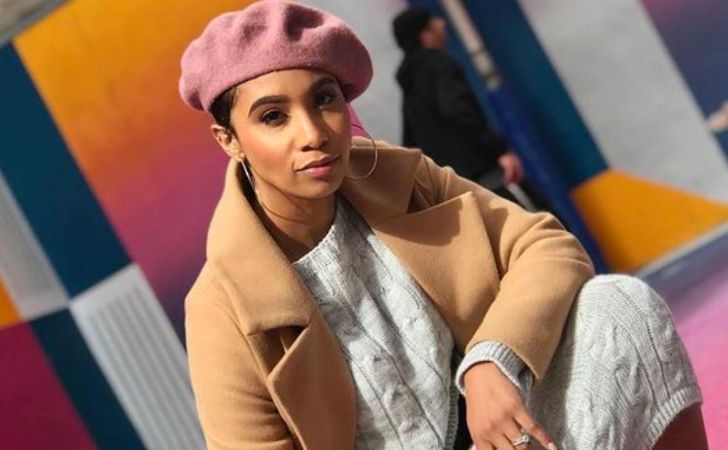 Carrington Franklin is the adopted daughter of American gospel singer Kirk Franklin. The eldest daughter in the Franklin family, Carrington serves as a CEO and Creative Director at Liz Kennedy Brand Management at present.

Along with leading a successful career in branding and marketing, she is also a social media star. Besides, she is married and also has a son with her husband. What’s more? Well, in this article, we will cover facts surrounding her biological father, career, net worth, & her relationship with her husband as well.

Carrington Franklin Is The Adopted Daughter of Kirk Franklin

While she is famous as the daughter of gospel singer Kirk Franklin, he is not her biological father. Rather, she is the biological daughter of mother Tammy Collin and was born from her relationship prior to Kirk.

Later, after Tammy married Kirk, he adopted her as his kid. She has since been accepted in the media as the first child of Kirk and Tammy. She was born on May 13, 1989, in the United States. As of 2022, she is 33 years of age.

She Is Highly Educated

In case you did not know, Carrington is an educated individual. She did her schooling at a local school in her hometown and later attended Baylor University from 2007 to 2011. There she received her BA in journalism, public relation, and management.

Later, from 2012 to 2014, she attended Dallas Baptist University, where she received her Master of Arts degree in Organizational Communication Management. Ever since she has been professionally involved in her field.

Carrington is not the only kid in the family she has three half-siblings Kennedy Franklin, Kerrion Franklin, Caziah Franklin. While Kerrion was born from her father’s former relationship, Kennedy and Caziah are from her mom Tammy and step-father Kirk’s marriage.

Her brother was once arrested

In April 2022, Carrington’s half-brother was arrested by Beverly Hills Police. He was apparently driving a vehicle of a woman who was presumed to be dead and missing. When authorities arrested him, they searched the car as well and found a weapon in it, which Kerrior denied was his.

Afterward, the authorities arrested him and after staying in the prison for about two months, a judge released him from all the charges.

Franklin shares a great relationship with both her parents. In fact, her relationship with her father Kirk seems even stronger despite the fact that he is not her biological dad. She is pretty proud of him and often shares photos of him on her social media. In fact, she never misses spending time with him on every occasion, be it his birthday, Father’s day, or even his marriage anniversary.

Back in January 2019, she shared a beautiful photo of her parents on her Instagram wishing them their anniversary. Not only this, but she also stated how blessed she is to have parents like them in the caption.

She wrote, “Dallas Baptist University Degree NameMaster of Arts – MAField Of Mommy + Daddy, I’m so incredibly blessed to witness your awe-inspiring love up close 🙌🏽 I can’t say thank you enough for your example, transparency, & wise counsel for my own marriage. LOVE YOU + Happy Anniversary💕”

Further, in January 2020, she along with all her family members gathered to celebrate dad’s 50th birthday and they looked pretty happy together.

Carrington Is The CEO Of Liz Kennedy Brand Management

Kirk’s daughter Carrington leads a successful career in brand management and marketing. At present, she serves as the CEO and Creative Director at Liz Kennedy Brand Management and is doing pretty well in the business.

Prior to this, she worked for several other organizations. She began her career as an intern for KLTY Christian Radio from Jun 2008 – Aug 2008. Later from May 2009 to Aug 2010, she was an intern at Karmen Johnson & Associates. This was followed by her internship at Girl Scouts of Central Texas, where she interned from Aug 2011 to Nov 2011.

Her first job as a professional was as a Social Media/Marketing Manager at UT Arlington Continuing Education. There she worked for 18 months from March 2012 to August 2013. Eventually, she was the Executive Assistant at Pat & Emmitt Smith Charities and Treasure You from August 2013 to May 2014.

Besides, she also worked as an Event Coordinator at The University of Texas at Arlington. There she worked from Apr 2014 to Nov 2015.

As we all know, Carrington is a married woman. She is married to her boyfriend-turned-husband Maxx Nakwaasah. They married on October 1, 2016, in a beautiful wedding ceremony in Dallas Union Station. Both the husband and wife seemed pretty happy on their big day, and the bride even stated the ceremony was a “dream.”

Maxx had earlier proposed Carrington in October 2015 at a Botanical Garden in Dallas Texas. Righter after saying yes to her future hubby, she could not wait to share the big news on her Instagram, where she wrote,

This past Saturday morning my best friend asked me to spend the rest of my life with him, and after asking him “is this for real?!” I said YES

The couple met for the first time back in 2009, when she was just 20 years of age. They reportedly began dating in 2011 and are together ever since. They share a great relationship as a married couple, and we hope it continues forever.

Just for a fact, Maxx is a senior fund accountant at Hudson Advisors.

She Has A Son

Franklin and her spouse Nakwaasah are parents to a son named Shiloh Mekhi. They welcomed their kid on April 13, 2020. The newborn weighed 7lbs 14oz and was 19 inches at the time of his birth.

Well, the new mother shares a great relationship with her son. She has posted numerous photos of her baby on her Instagram. The family of three resides in Uptown Dallas, Texas.

Beautiful Carrington is a big fan of social media. She is not only on Instagram but also on Twitter. As of 2022, she has around 70k followers on her Instagram and she is also very active on the platform.

Likewise, she has over 7k followers on her Twitter. She often marked posts on both platforms.