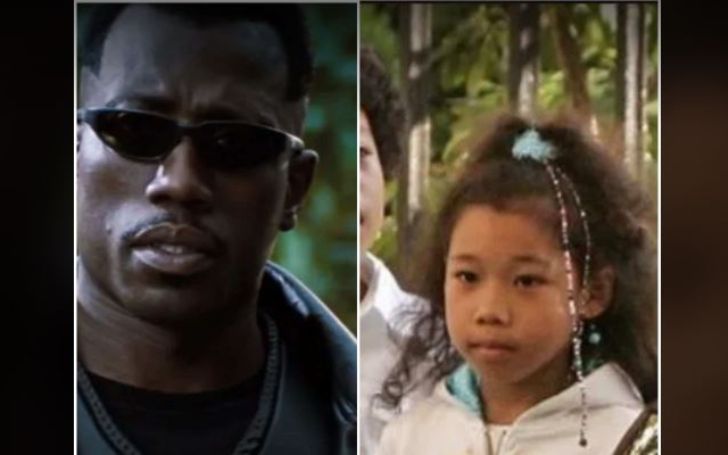 Iset Jua-T Snipes is the daughter of the Blade actor Wesley Snipes and his longtime wife, Nakyung Park. Iset is the only daughter of Snipes and Park who was born in the early 2000s. She now is well into adulthood however she hardly has any recent public appearances with her celebrity father.

Iset’s father, Snipes, while famous is a private man when it comes to his family. But every now and then, people do want to know a few or two details regarding his kids.

So down lie the bits and pieces explaining the so far life and family details of Iset Jua-T Snipes. Read from her birth to her career and even some other untold facts.

The only daughter of Wesley Snipes and Nakyung Park, Iset was born on July 31, 2001. Coincidentally her birth somehow saved her parents actor, Snipes, and Park from one of the most unfortunate days in America, the 9/11 attack. Amidst the impending attack, Snipes was in Los Angeles with the then newborn, Iset Jua-T Snipes. On the other hand, the Blade actor’s Manhattan apartment got destroyed by the September 11 attack after the World Trade Center collapsed. Fortunately, Snipes and his wife, Park escaped unscathed because they were on the west coast for the birth of their daughter, Iset.

In an interview, Snipes told,

We lost a place, but my daughter was born at the same time. We were taking care of her in Los Angeles because there’s a tradition that you don’t travel with a newborn. So literally we were lying in bed and my sister called me and said, ‘Turn on the TV.’ Our daughter’s lying there between us and I looked over at my lady and said, ‘Baby, our place is gone!’ I just turned to my daughter and started kissing her. ‘That’s why you came, my girl. You saved our lives… you’re a lifesaver.

9/11 marks one of the darkest days in American history. On September 11, 2001, some 3000 victims were killed in New York, Washington, DC, and Pennsylvania when terrorists hijacked passenger planes and hit them into major landmarks.

Iset Jua-T Snipes Parents; Who Is Her Mother? How many siblings does he have?

Iset’s mother (Nakyung Park, or Nikki) was born on Sep 1, 1974, in South Korea. Park mostly grew up in South Korea but moved to the US somewhere between the 1980s and 1990s. Iset’s father, Snipes said he considers South Korea his second home.

Professionally, Nakyung is a painter for which she apparently has been passionate since her childhood. Nikki reportedly learned paintings in her neighbor’s garage. Although Nakyung keeps a low profile, she occasionally showcases her creations at several art exhibitions.

Nikki additionally is also into graphic designing and makeup artistry. Someone who is also into fine arts is Iset’s actor father, Wesley Snipes. Snipes, in fact, graduated with a degree in BFA from the State University of New York, Purchase.

How Iset Parents, Nakyung Park And Wesley Snipes Met Each Other? Their Relationship

It is unclear when Snipes met Park but it is presumed it was somewhere between the mid to late 90s. They dated for a few years before getting married on March 17, 2002. The couple tied the knot in a courthouse in Hackensaw, New Jersey. The American Korean couple’s big day wasn’t any glamorous. They instead opted for a low-key celebration. Snipes and Park didn’t even wear traditional wedding attire and Park, herself didn’t even walk down the aisle. One of the attendees later reported the wedding didn’t have photographers, videos, or crowds. Snipes and Park, in fact, had to use a court employee as their second witness.

Park and Snipes are parents to four children including Iset. They were already the folks of two kids before their marriage. Snipes and his South Korean wife welcomed their first child, Akhenetan Kihwa-T in 2000. A year later they would have Iset. Three years later, Snipes and Park gave birth to their third child, Alaafia Jehu-T. Then in 2007, the couple welcomed their youngest child, a son, Alimayu Moa-T.

Besides the aforesaid names, Iset also has one more brother although a half-sibling, Jelani Asar Snipes. He is Snipes’ son with his former wife, April Dubois.

Iset Jua-T Snipes Grandfather Was A Reputed Producer And Director

Park’s late father and Iset’s maternal grandfather was producing director at Munhwa Broadcasting Corporation (MBC) and Korean Broadcasting System (KBS). He worked for more than three decades in the Korean film industry and directed a multitude of Korean TV shows including classics like The Season Of Men (1985), Another Happiness (1991), and What Is Love? (1991), among others.

Many critics and locals still consider the latter one of the first-ever acclaimed Korean TV shows. The show was also a landmark hit; it extracted millions of views from China where it started airing in 1997 on CCTV.

Iset And Her Brothers Featured in Coming 2 America

Iset’s father, Snipes’ film, Coming to America is a hit movie and the film also has a sequel, Coming 2 America which also received similarly positive reviews.

The follow-up movie had several cameos from Morgan Freeman to Trevor Noah.

It also had several other secret cameos but usually hard to detect. One such instance was the subtle inclusion of the Snipes family.

When talking to Fatherly in March 2021, Snipes also discussed a bit about his role as General Izzi, the leader of Nexdoria in Coming 2 America.

Snipes pointed out how Izzi was a funny yet fearsome man who cared about his kids and that he was also a loving father who didn’t want to be funny but he ended up becoming the one.

Wesley then said it was his kids including his daughter Iset who was the inspiration behind General Izzi. Snipes said his character on Coming 2 America was the reflection of his kids and “their influence and impact” on him.

Snipes further revealed that General Izzi’s timing, humor, and nuances were all thanks to his kids. The Passenger 57 actor also said that his joy “is a reflection of them and their effect” on him.

Snipes ultimately also disclosed that his family, too, was in the movie. The actor however didn’t say if his children and his wife were together but admitted they were all in one particular scene.

What Does Iset Jua-T Snipes Do?

As mentioned Wesley is super private when it comes to his kids. Furthermore, not even his children including Iset happen to be of the age to go out and tell stories on their own. On top of that, despite some of them being late teenagers, they are virtually no-shows on modern trends like Instagram and Facebook, or at least that obvious.

Although Iset is one of the eldest children of Wesley, people haven’t really seen how she’s been growing up in all the recent years. That said it may be a while before the outsiders start knowing about her usual pursuits or her other affairs.

How Rich Is Iset Father, Wesley Snipes; His Net Worth?

Iset’s father, Wesley Snipes who has a net worth of over $10 million certainly counts as a wealthy being. If not for some of his past mistakes, Snipes’ fortune would have been definitely a lot more. In fact, in the 90s, Snipes was well on his way to becoming one of the richest actors.

After the success of the 1989 film, Major League, Iset’s actor father had become an actor in high demand. However, in the following years, some string of flops and his behaviors on set as well as his tax evasion gave quite the reverse effect on Snipes’ wealth. During the fallout, Wesley reportedly lost tens of millions of dollars. He nevertheless is still a millionaire and his current net worth, as mentioned above.