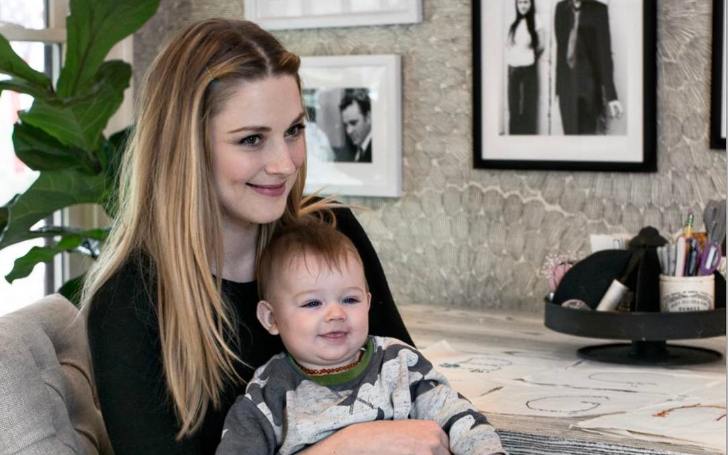 Jack Breckenridge Hooper is famous as a son of an American actress Alexandra Breckenridge who is widely known for playing the lead character Melinda “Mel” Monroe in the Netflix series Virgin River. His mother began her career as a supporting actress who got mainly noticed after she played Jessie Anderson in the AMC series The Walking Dead and Sophie in the NBC series This Is Us.

Similarly, Jack’s father Casey Hooper is also in the American entertainment industry. He is an accomplished musician who worked as a guitarist for American singer and songwriter Katy Perry. Further, he also plays guitar for Steve Perry and SurfMaster. In 2022, Jack’s parents, Alexandra and Casey have been married for 7 years and Jack was born as his parent’s first child.

In this article, we will have a close look at Alexandra Breckenridge’s eldest child, Jack Breckenridge Hooper’s life.

Alexandra Breckenridge’s son Jack was born on the 3rd of September 2016 in the United States of America. At the time of his birth, infant Hooper weighed 9 lbs 1oz and was 21 inches long. In 2021, his actress mom talked to People about the birth of her first child Jack. She said to People,

“My son was huge. He was humongous”. “And I feel like the hippies lied to me.

His mother first announced her pregnancy with her first baby, Jack, back on  April 19, 2016, on her Instagram with a caption,

“Someone doesn’t want to hide in his moms tummy anymore… 💖 thank you for all the kind words 💖 Casey and I are very excited!! Xoxo.”

In 2022, Jack is 7 years of age and growing up alongside his parents and beautiful little sister. Now, talking about his nationality, he is an American citizen and is of mixed ancestry. His father Casey Hopper is Caucasian while his mom Alexandra has English, & Irish ancestry.

15 months apart, Jack became an older brother to his little sister named Billie Breckenridge Hooper. His only sibling was born on December 6 2017 which made her 4 years of age in 2022. Billie weighed 7 lbs., 13 oz, and 20 inches long at the time of her birth.

After Billie’s birth, Jack’s mom couldn’t hide her excitement and talked to people about both of her children. She said,

“We are so excited to have a boy and a girl!”

“Billie is such a sweet baby girl and Jack is such a social boy, with them only being 15 months apart they will always have a friend to play with”

At present, both siblings are close to each other. Just like their mother said, they are friends and a companion to one another to play with.

Hooper’s mom Alexandra, an actress, and his dad Casey, a guitarist shared vows on September 13, 2015, just a year before Jack’s birth. Their wedding took place in Dunton Hot Springs, Colorado among their close family members and friends. Since then, the married duo is living like a happily-ever-after couple.

On September 13, 2016, on the occasion of their first marriage anniversary, Alexandra shared her lovely wedding photo with a caption,

One year ago today I married my best friend.
I can’t imagine life without him. 💖
@caseyhooper

While the actress and musician were celebrating their first marriage anniversary, their son, Jack was already 10 days old. The couple had a double joy on this specific day as they already paved a path to parenthood by having a lovely son.

How Did Jack’s Parents Meet?

It has been over a decade since the couple Casey and Alexandra are with each other. For the first time, they came across each other at a Grammy’s after-party, and soon after they began dating one another. The pair made their relationship official in June 2012 by appearing at the 2012 premiere of Ted.

After 2 years, on September 16, 2014, Alexandra announced her engagement with her now-husband Casey on her Instagram with the caption,  “We have Engaged!

.”  and the rest is history. As we all know, they shared a great bonding and are walking on 7 years of their married life in 2022 happily and blissfully with no sign of breakage.

Jack Breckenridge Hooper Is A Treasure To His Parents

It is not an unknown thing that for parents, their children are always a treasure. Well, in this case, Jack is also an apple in his parent’s eye. As a firstborn, he is dearest to his mom and dad. His mother Alexandra keeps sharing his adorable moments on her Instagram account to display his lovely and captivating cuteness.

On Sep 28, 2020, a virgin river actress shared his cuteness with a caption,

My first born. Jack. Apple of my eye. Tried to put together a video of this little child but there was just way too much good stuff… So it’s gonna take me a little longer to work on one but here is one of my favorites❤️

A 7-year-old celeb-child often appeared on his mom’s Instagram under the username @alexandrabreck which has 1 million followers.

In 2017, after welcoming a second child, Jack’s beautiful mommy mentioned Jack being a social boy while having an exclusive talk with People. And now, his father has revealed that, by nature, he is very inquisitive. Wherever he goes, he always has many things to ask his parents.

Took my son to see the Buddy Holly crash site memorial in Clear Lake Iowa. Bringing my kids to see this here in my home state was a bucket list thing for me.

While wandering in the memorial site, Jack’s inquisitive nature popped up naturally and as per his father, he spontaneously brought a lot of queries. In this regard, Casey further writes about his son,

Jack had lots of questions and you can see from his face that the wheels are definitely turning. It’s been fun sharing Buddy’s music with my kids. Rave On Buddy! RIP Buddy, Richie, Big Bopper and Pilot Roger.

Jack Breckenridge Hooper Is Growing Up In Atlanta, Georgia

In January 2019, his parents migrated to Atlanta, Georgia leaving their memories in Los Angeles city, California. In an exclusive talk with Atlanta magazine, Alexandra disclosed a reason for moving into their two-story house in Atlanta. She said,

“The rural areas of Georgia have an amazing sense of community we were lacking in L.A.”

She further added that they migrated to Georgia not only for the community but also for the sake of her children. Alexandra told,

“We wanted our children to grow up in a place where they could play and ride their bikes that didn’t feel like a big city.”

Since then, Jack has been growing up in a quieter family environment with his parents and siblings. Counting on his age, he probably is studying in a school in the town of Atlanta.