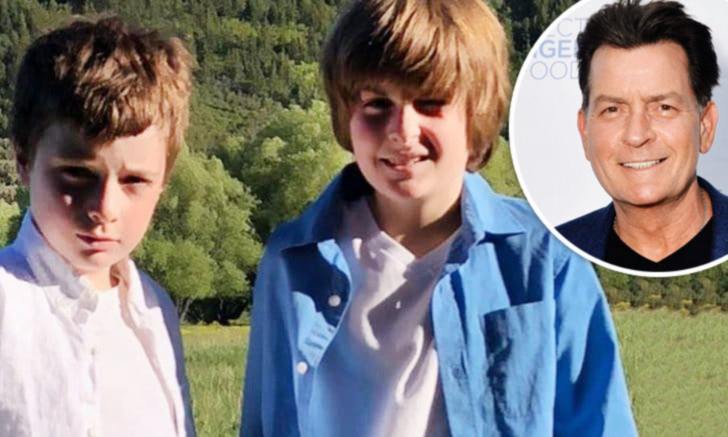 Max Sheen is widely recognized for being the son of an American actor Charlie Sheen (aka Carlos Irwin Estevez). His father Charlie is best known for portraying the character Charlie Crawford in ABC’s Spin City which even earned him a Golden Globe Award for Best Actor. Further, in 2010, he was famous for being the highest-paid TV actor, earning US$ 1.8 million per episode of Two and a Half Men.

Likewise, Max’s mother Brooke Mueller is also an American actress, known as Janet in the 1999 direct-to-video film Witchouse. His parents Charlie and Brooke remained married for just about 3 years. The couple has many ups and downs in their marital life due to which Max underwent some difficult situations at a very early age. Well, how was Max’s behavior in that stressful situation? Did he face any psychological problems?

Let’s get to know in detail about Two and a Half men famed actor Charlie Sheen and his ex-wife Brooke Mueller’s son Max Sheen along with his age, siblings, Instagram, and many more. Have a close look.

Max Sheen Was Born Twin: He Had A Premature Birth

While his exact birth date is out of media reach, the news of his birth was published by People on March 15, 2009, mentioning,

His twin brother’s name is Bob Sheen and both Max and Bob arrived seven weeks earlier than the given date. They brought joy to the family and regarding this, Charlie’s publicist Stan Rosenfield had talked about the babies, Max and Bob, and told to People

After their birth, the sports-themed baby shower was organized at the Los Angeles Home of Dr. 90210 star Dr. Paul Nassif.

Max’s Dad Was Thrilled To Be A Father Of Sons

With the birth of Max and his twin brother, his father charlie became a dad to a boy for the first time. Prior to that, he had daughters.

When he was asked about the feeling of having twin boys, he said

Oh boy, I’m totally confused. I’m completely baffled. Not to be graphic, but this is my first time changing a diaper for boys. I’ve been peed on a little. Bob really impressed me – he hit the wall from two feet away. I was just glad I didn’t take it in the face!

On the other side, Mueller was equally happy to be the mother of twins.

Max Sheen’s Had Luxurious Life As A Kid

Max, after his birth, had a grand welcome. But within a year of his arrival in the world, his parents filed for a divorce in court. He was just two years old when his parents separated legally. So, is obvious that he couldn’t get an easy and loving family environment in his early days. He was raised by his mother alone alongside his twin sibling.

Similarly, talking about his nationality, he is an American citizen. Sheen belongs to a mixed ethnical background as his father, Charlie Sheen came from Galician Spanish, Irish, English, and Scottish ancestry while his mother is of the German race.

He Has One Sibling And Three Half-Siblings

As Max Sheen was born twin, so he has a biological brother named Bob Sheen which we mentioned above. Besides that, he has 3 other half-siblings named Cassandra Jade Estevez, Lola Sheen, and Sam Sheen.

Likewise, Cassandra is his half-sister from his father Charlie’s relationship with his high school girlfriend Paula Profit. Further, Lola and Sam are his half-sisters from his dad’s second marriage with actress Denise Richards.

After his parents separated, the court decided to give Max and his twin brother custody of his mom. For this, Court ordered Charlie to pay an amount of $55,000 a month to his ex-wife for child support.

But, Charles seemed frustrated with the court decision and alleged his ex-wife regarding this. At a time, his close source stated,

“Charlie is very upset over the situation. Basically, he feels she is using the child-support money [he pays her] to get high.”

In 2018, the actor requested the court to modify the child support agreement due to his inconsistent work and decrease in his income source. Eventually, now in 2022, the issue over the child support case between Max’s parents settled down. Regarding this, Charlie’s attorney said,

“Mr. Sheen and Ms. Mueller recognize together the great benefit to their children in peacefully, privately coming to terms focused on the family’s overall best interests,”

In the year 1996, she was arrested for a DUI charge and after 5 years, she again moved to jail for cocaine possession. With ongoing drug use, Max’s mom joined and completed her outpatient rehab program in 2011. But even after that, she was suspected of continuing drug consumption.

In 2016, the media captured her walking barefoot into the bar alongside her twin sons. As per sources, Mueller had been continuously involved in drugs and had never come out clean. In 2019, the actress sought help from professionals and checked into the trauma center. In this regard, her representative told People

The actress “has voluntarily checked herself into a trauma center on the East Coast and is under the care of professionals, Brooke is committed to getting better and working hard to overcome this and get well.”

Today, we hope Max’s mom, Mueller is really doing better and is enjoying her life with her kids.

Back in May 2013, a representative of the Department of Children and Family Service pulled the custody of Max and his twin brother from Mueller with the ongoing drug use suspicion. At the time, their custody was given to Max’s father Charlie’s ex-wife Denise Richards. At that time, she took care of 4 years old Max and Bob.

But later, the same year, Richard withdrew herself from this responsibility mentioning the violent behavior of Max and Bob. Look at her own words…

With a heavy heart I must inform you that I can no longer be Bob and Max’s caregiver.  I have seen the boys’ continuing violence towards animals, their sisters, and adults.

According to her, at the time of placement, Max acted very sensitively and aggressively at the same time. She further said

The boys started to have extreme violent mood swings, often times out of nowhere. The boys would grab anything they could get their hands on as quick as possible. Toys, picture frames, any object within arm’s reach, they can pick up they would throw. They violently threw these things at me, my daughters, anyone near them, as well as at the windows and walls.

With the extreme violence, Denise didn’t forget to mention that before Max and his sibling both were loving and kind. Looking at this, we can easily assume that whatever Max went through was due to the conflict between his parents that they bear at a very early age.

Max Sheen Is Growing Up Under The Care Of His Grandparents

While his mother was in Rehab and his father’s ex-wife took out her hand from taking care of Max, he went to live with his grandparents.

In the year 2016, when the news about Max and his brother’s missing resurfaced in the media, at that time Max’s grandmother came front and spoke. She told,

“The boys are with me now and they are doing great, They are both in school here in Utah.”

Since then, Max and Bob is under the care of their grandparents. In 2019, their close sources stated to People,

“The twins are doing fine and are living with their grandparents during this period,”

Side by side, Charlie also sees his children, Max and Bob, and is happy to share time with them.

As per his step-mom Denise Richard, Max has a great interest in sports. In 2022, he is hopefully doing great in his interest area, sports as well as in his academics. As per his age, he is obviously studying in school.

In 2016, he entered the local school in Utah. Nothing to say, maybe he is studying in the same school in 2022.

The 13-year-old celeb child is not on social media, neither on Facebook nor Instagram. Whatever the pictures and their personal stuff are on the online portal, all are from the past. His current situation is out of media as his famous father doesn’t share him often on his Instagram except once.

Just once on Aug 31, 2018, Max’s father shared him and his twin Bob on his Instagram @charliesheen and captioned,

please
follow this
young man,
or his twin bro
will be
really upset!
@bobsheen_saves_the_world

From this, we can as least say that Max is growing really close to his twin brother.

He is just a kid and a school student. So, it is obvious that his net worth is yet to be estimated. On the other side, his actor father Charlie Sheen has a net worth of $10 million.