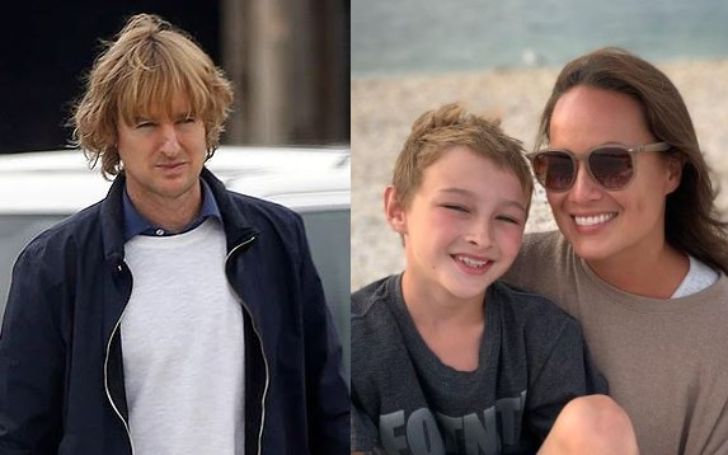 Robert Ford Wilson is the son of the Marly And Me actor Owen Wilson and his former girlfriend, Jade Duell. Robert (often also called Ford) is the eldest child of Wilson. The actor also has two more kids, a son, and a daughter.

The Zoolander actor has often mentioned his sons in several of his interviews. The media have also caught Wilson and his son, Robert several times on walks and bike rides.

Robert has been the proof that Wilson takes his father’s role very seriously. So how is he doing in recent times? Also, who is his mother? Is she the wife of Wilson? Scroll the answers in the content below.

Owen welcomed Robert Ford Wilson’s nickname Ford on Jan 14, 2011, on the Hawaiian island of Maui. The birth took place at Wilson’s $8 million oceanfront home. Owen’s first son, Ford weighed 6 lbs and 13oz. At the time of his delivery, there was help from a midwife and the labor lasted for about 18 hours. Robert is now 12 years old.

For years after Ford’s birth, his mother and Owen kept their son out of the spotlight.

However, when he was still an infant, Wilson did mention Robert once. It was during his interview with Jay Leno on his eponymous late show. At the time, Owen revealed while his son hadn’t been able to speak he was a wonderful conversationalist because he was “so cute.” Wilson added his son had become a little scene-stealer.

As for now, Owen says he’s quite strict with Robert and his sibling, although the actor himself grew up in a pretty relaxed household.

Owen’s son, Robert is also the nephew of actors Luke and Andrew Wilson. The former is known for films including Rushmore, My Dog Skip, Legally Blonde, and others. On the other hand, Andrew has credits in films like Fever Pitch, Idiocracy, Church Ball, Whip It, and Time Trap.

Who Is Robert Ford Wilson Mother? Her Relationship with His Father, Owen Wilson

Robert’s mother, Jade Duell has had multiple professions. She has worked as a police officer, a federal air marshal, and in the department of homeland security.

Jade and Wilson met when the latter was filming the movie, How Do You Know? They encountered each other on a flight from Los Angeles to DC in 2009. Their relationship however didn’t last long.

The ex-couple ended their romance sometime in 2011 which was shortly after the birth of their first & only child, Robert. After the separation, Jade moved to New York with her then-newborn son, Ford to be closer to her family.

Besides Jade, Owen also has had relationships with other women and celebrities including Sheryl Crowe, Kate Hudson, Gina Gershon, Demi Moore, and others. Wilson however never married any of his former partners.

Robert Has A Half Brother And A Half-Sister

Finn apparently wants to do everything that his elder brother, Ford does – says their actor father.

Robert also has a younger sister, Lyla Aranya Wilson. Lyla is Finn’s daughter who was born through Owen’s relationship with his other ex-girlfriend, Varunie Vongsvirates.

Robert Hasn’t Met His Half-Sister; And Neither Has His Father, Owen Wilson

Although Robert and Finn are growing up together, they do not have much or at all contact with their half-sister. The two brothers, Finn and Robert apparently have never met their half-sister Lyla Aranya Wilson. In fact, even Owen, himself hasn’t met his little girl Lyla and she is now already four years old.

Furthermore, Owen refused to admit the fact that Lyla was his daughter when Varunie told him she was pregnant with their child. Later, however, the DNA tests showed Lyla was in fact Wilson’s daughter. The Darjeeling Limited actor now reportedly pays for child support and her other expenses as well.

Wilson in an interview with Ellen Degeneres in June 2017 revealed his eldest son, Robert had taken up parkour and was also showing interest in stunts. Owen added Robert was also becoming a big Jackie Chan fan and that he was testing out his stunt moves in the park. During the interview, Wilson also shared a video where his son performed a few of his daredevil diving skills.

In fact, Robert at the time also had to visit the hospital to get a few stitches. Wilson however didn’t reveal if it was because of Robert doing his stunts.

Meanwhile, Owen also answered whether his son, Robert found his actor father cool. The Wedding Crashers actor said his son, had, instead, started to think it was him who was too cool to hang out with his celebrity father in public spaces.

Wilson said his then-toddler son, Robert was already rolling his eyes most of the time he was with his father.