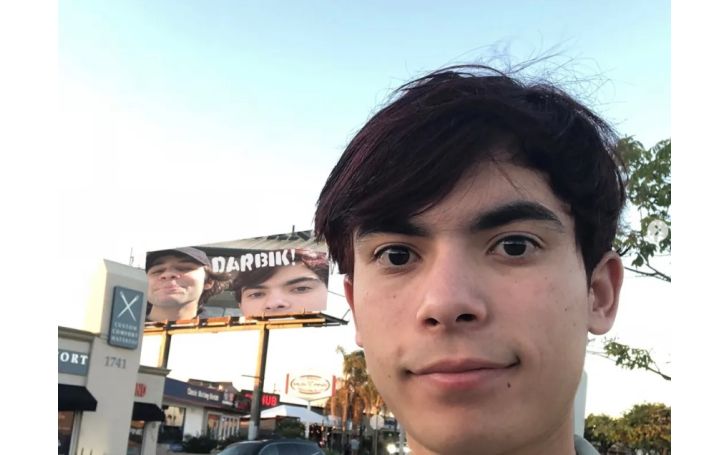 Joshua Ovalle is an American social media star who became famous through his eponymous YouTube and Vine account. His weird yet funny short videos on Vine made all of us laugh. Meanwhile, on his YouTube channel, he shares varied types of videos including his infamous satirical videos.

For the last couple of years or so, Josh has not been active on social media. He rarely uploads videos on his channel just like many other old-time YouTubers who generally transition towards some other field. He is reportedly working as a producer and has worked with a couple of renowned movies and series.

Well, here in this article we shall find out many interesting facts about Joshua Ovalle.

Joshua Ovalle was born on August 21, 1998, in Seattle, Washington. He is one of three sons between his mother Rose and father Wernher Ovalle. He belongs to the American nationality and has English ancestry.

His father is an internal medicine physician based in Newport Beach, California. He graduated from UC San Diego and the University of Washington, Seattle. He currently works as the medical director for Care Choice Home Health, one of the biggest health care agencies in Orange County.

The social media sensation grew up alongside his brothers, Lucas, born July 30, 2000, and Elijah in the Beach/Costa Mesa area of California. All three of them, however, were born in Seattle.

Josh’s brother Lucas is also a social media star like his older brother. He became famous through his Vine account he posted short comedy videos. Besides, Lucas was once in a relationship with fellow Viner Emma Greer, who unfortunately lost her life to cancer in 2016.

On the other hand, Elijah Ovalle is an actor. He worked as an actor for his brother Josh’s movie, Two and a Quarter Mile (2014).

Through his educational journey, Josh faced a lot of challenges. From an early age, he suffered from ADHD (Attention Deficit Hyper Disorder). For those of you who don’t know, ADHD is a mental disorder that led to trouble paying attention, hyperactivity, and impulsiveness.

He enrolled at Mater Dei School but was expelled midway through high school. He later joined Halstrom Academy, which really helped a lot in this journey toward dropping out of Studio School Los Angeles. While talking about how his high school experience was, Josh, stated that he was somehow lost in school, all due to his ADHD.

Nevertheless, it all changed for him when he enrolled at the Halstrom Academy. Just a year after joining the institute his grades took a full u-turn. He said,

“I’m proud of my GPA. I have completely turned my grades around. I learn things better now, quicker, I’m getting A’s, and I’m more confident about everything. If I don’t get something, my teacher immediately corrects me. Also, my mind can’t wander off, as much as it may want to. Before Halstrom, I felt that getting into a high-caliber University was not going to happen, but now, that’s definitely a possibility.”

Aside from this, he also studied at Studio School Los Angeles.

Joshua first became famous due to his YouTube career

It was back in 2013 when Josh first came to media prominence. He made a short film titled Minimum Max that showcased his struggle at school while suffering from ADHD. For the film, he won several awards and was shown at 50 film festivals like Newport Beach Film Festival, and Seattle International Film Festival.

Then a year later 2014, he started his Vine account by the name of Josh Kennedy. From the very beginning, he became an instant hit. Fellow online comedian Cody Ko praised his Vines which further increased his fame.

Once the platform Vine was discontinued, he moved to YouTube and TikTok.

From the very beginning, Josh was interested in movie making. Through his YouTube channel, his passion for filmmaking was evident.

His home movie-type production aesthetic gave a nostalgic and intimate vibe. The majority of his videos involved stone structure and style of editing. Any normal Josh video has two parts- a skit that makes fun of tropes in popular films and then quickly he transitioned towards sharing moments with his friend.

Talking about friends, Ovalle is incredibly good friends with Finn Wolfhard and comedian Casey Frey, both of which have of.

Is Joshua Ovalle dating? Who is his girlfriend?

As of right now, it looks like Josh is not in a relationship with anyone. Going through his social media accounts, he has not revealed anyone as his girlfriend.

Besides, Josh is an incredibly secretive person when it comes to his personal life. While his professional life is something that is out in the open, his dating life is a different story.

Nevertheless, Josh has mentioned in a handful of videos about his ex-videos. In one of these videos, he mentioned two of his ex’s names, Emily and Erica. He also mentioned in the video that he had an incredibly good relationship with Emily, saying, it was the best couple of months of his life.

Joshua has a series of drug problems

In a video published on March 20, 2021, Josh revealed that about his substance abuse. He revealed that he is an alcoholic and also faces severe issues with other types of drugs.

In the video, titled ‘Where I’ve been for the last 3-years,’ Josh talked about why he disappeared from YouTube. For him, becoming sober was extremely challenging as he usually relapsed before he could fulfill his goal.

Nevertheless, at the time of sharing the video, he had been sober for about three months.

According to reports, his net worth is around $1 million. He earned the major portion of his income through the videos that he published on YouTube and Vine. He also gained a wealth from his work as a producer in several movies and series.